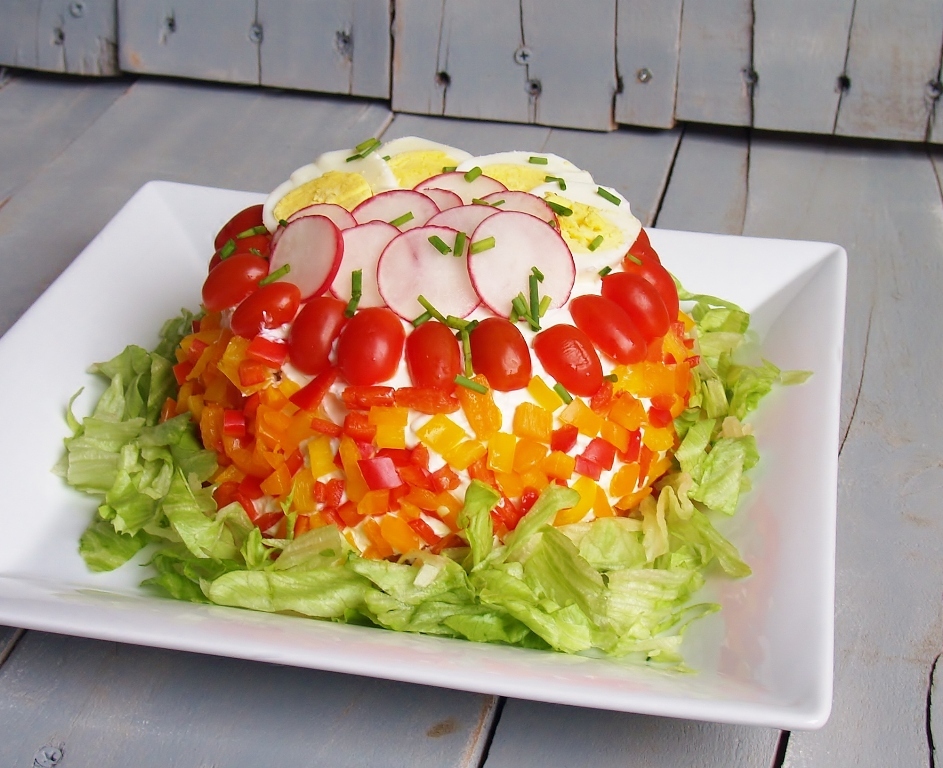 A Smorgastarta is a Swedish Sandwich Cake recipe that has many variations. I had my first one at my Aunt and Uncle’s home on graduation night for my cousin. Aunt Jan used bright pink food coloring for one of the layers and I was so mesmerized by this great tasting savory “cake” with bright pink layers and beautiful white “icing” I ate two whole pieces which was a big deal back then because I ate like a bird back then. I thought about if often over the years and one day two years ago I was visiting with my aunt, who is in poor health these days, I asked about it. She stared off into the ceiling for a while and I thought she had forgotten the question and then she said, “Smorgastarta is what it is called, very new in the 70’s in America”.

Aunt Jan told me she would do her best to find the recipe in one of her old books and get it to me. Here is a picture of her on her wedding day with my beloved Nana on the left and her own mother on the right. Isn’t her dress beautiful? She told me that she drew that out on a piece of paper and a woman custom made the dress for her special day. Top Girl and I have always loved her and my uncle’s wedding pictures as some of the most beautiful we have ever seen. 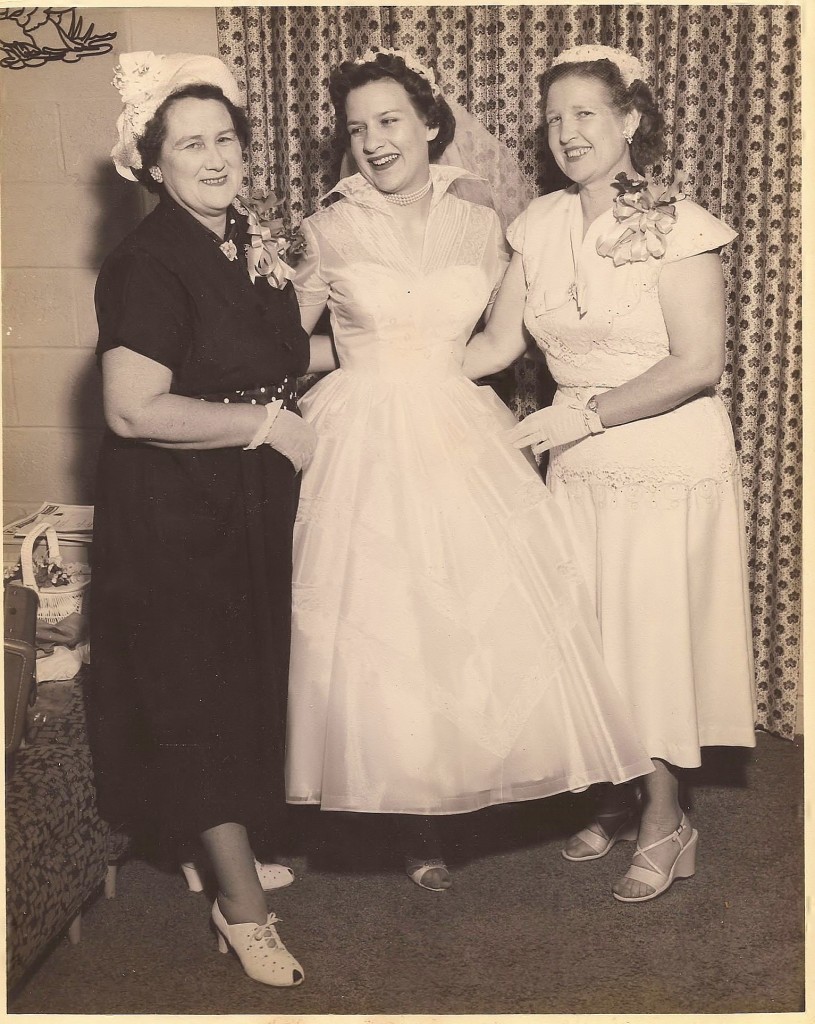 It took another year before I got the recipe but I did and I made it just the way it was written – with white bread, but that was far too flimsy. I didn’t have the secrets she had to make it so well with a loaf of Rainbo bread. I decided to try one of those round pumpernickel loafs and it worked wonderfully and was visually beautiful but I am the only person who likes that kind of bread so it was a bit wasted. Then, I made it with Eggo Buttermilk waffles – you have to use buttermilk because they are about the only ones I could find that didn’t have some sweetness to them. The good news is that if you toast them not only do they not get soggy but those nooks and crannies hold lots of the good stuff! I am positive you could use Hoagie rolls or hot dog buns as layers and do just as well, or you could bake a round loaf yourself. In all instances, you will want to cut the crusts off. The original ones have Salmon and shrimp and other such seafood on them but I wanted to use my aunt’s recipe and seafood would go nowhere with Mr. Picky Eater.
I have no pictures of a slice of this dish – I took the pictures of the outside of the sandwich at a different time than the inside. All the ones of the slice are so blurry you cannot tell exactly what it is. I think something must have been on the lens, but it will teach me to check my pictures right away! I have made a diagram for you though so don’t worry!

Bread of your choice
Salt & Pepper all to taste

1 eight ounce block cream cheese, softened
1 Cup chopped pecans
1 eight ounce crushed pineapple, drained
2 Tablespoon sugar
Food coloring – if you want to color a layer, this is the one to do it with. Make it whatever color you want.
1 cucumber peeled and slices into thin round slices

Cut crusts off bread and slice horizontally into four pieces. Or, if you use waffles like I did toast them and use two stacked on top of each other per layer – you will need 8 waffles.
Mix each layer separately, seasoning to taste.
Place bottom layer of bread on plate and layer on the chicken salad.
Put next layer of bread on and secure with a few toothpicks all the way through.
Spread on the cream cheese, pineapple, and pecan layer on then on top, lay the sliced cucumber.
Put next layer of bread and secure with toothpicks.
Spread on ham salad and put top on.
Here is a picture of how it should look: 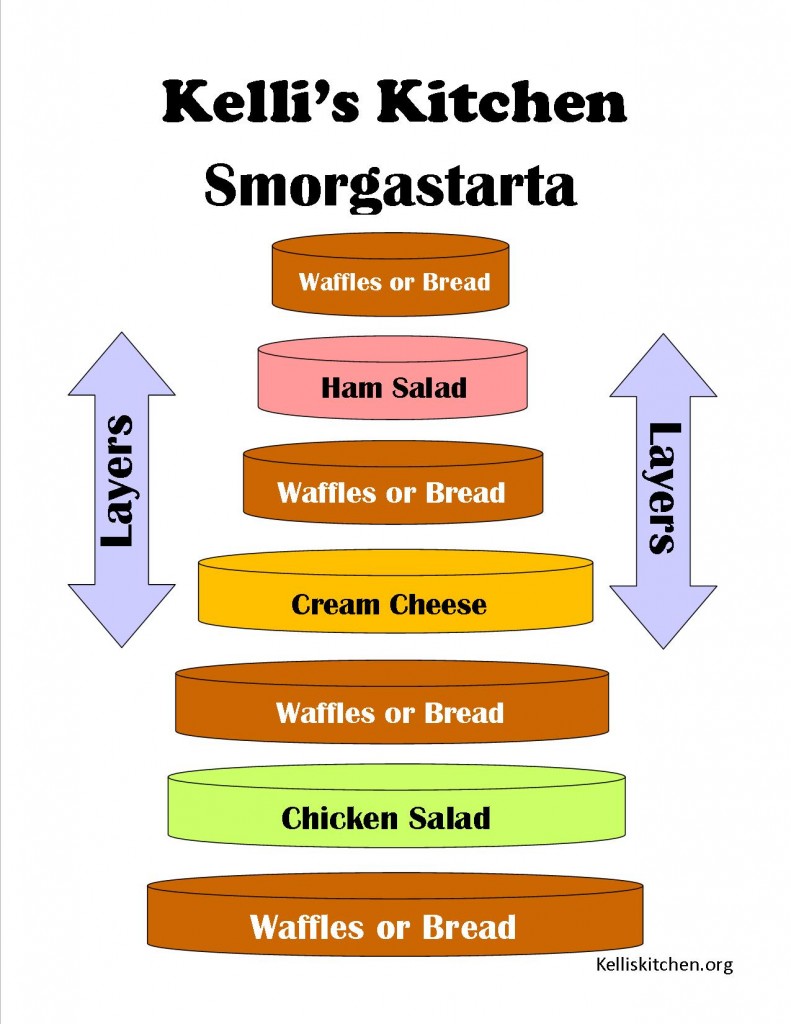 Cover with plastic wrap and put in the fridge for an hour.
Just before you take the sandwich out of the fridge, using a hand mixer, mix up the cream cheese and sour cream – you can use salt and white pepper but don’t use black to season it because it will show.

***Make sure you dry the sweet peppers, tomatoes, and radishes with paper towels so there is no moisture on them or they will not stick***

Take the sandwich out of the fridge and spread the entire thing and immediately put the chopped sweet peppers all around the sides.
Place the tomato halves around like you see in the picture.
Finally put on the hardboiled egg slices and the radishes and finally sprinkle with the chives.
Stick toothpicks all around and place plastic wrap over the entire “cake” and put in the fridge for at least 2 hours. I recommend putting in the freezer if possible for an hour before serving and then always use a serrated knife to slice.

When ready cut in small cake-like pieces and serve on dessert plates.
This makes a great holiday luncheon or party fare – you can make your own layers with filling your family enjoys or use other kinds of food to decorate the outside. If you can find enough orange sweet peppers – use them and some black olives for a Halloween jack-o-lantern. Use your imagination and have fun! 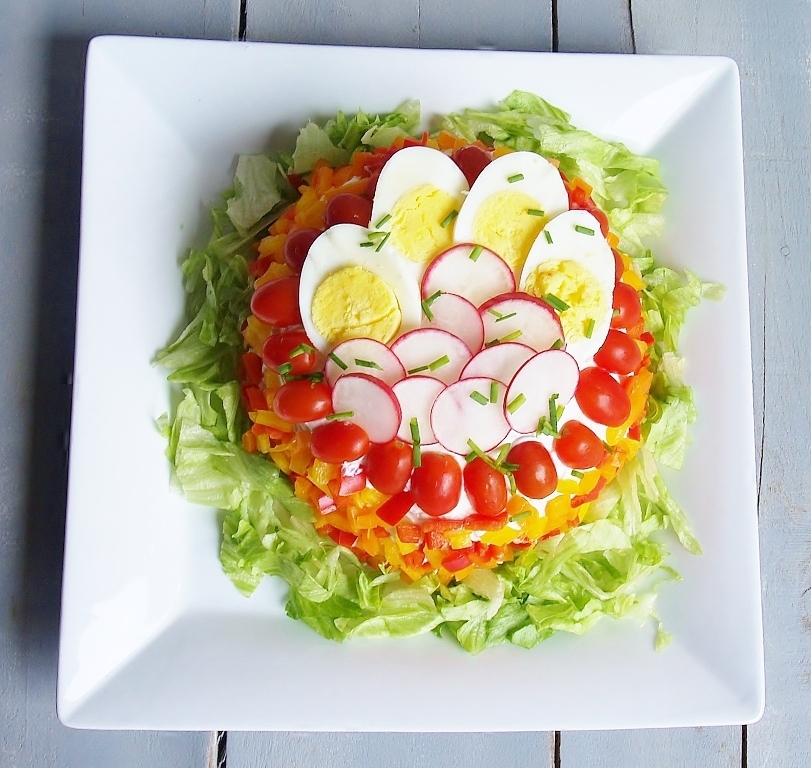 I am over at Weekend Potluck so come on over and play – you will love it!