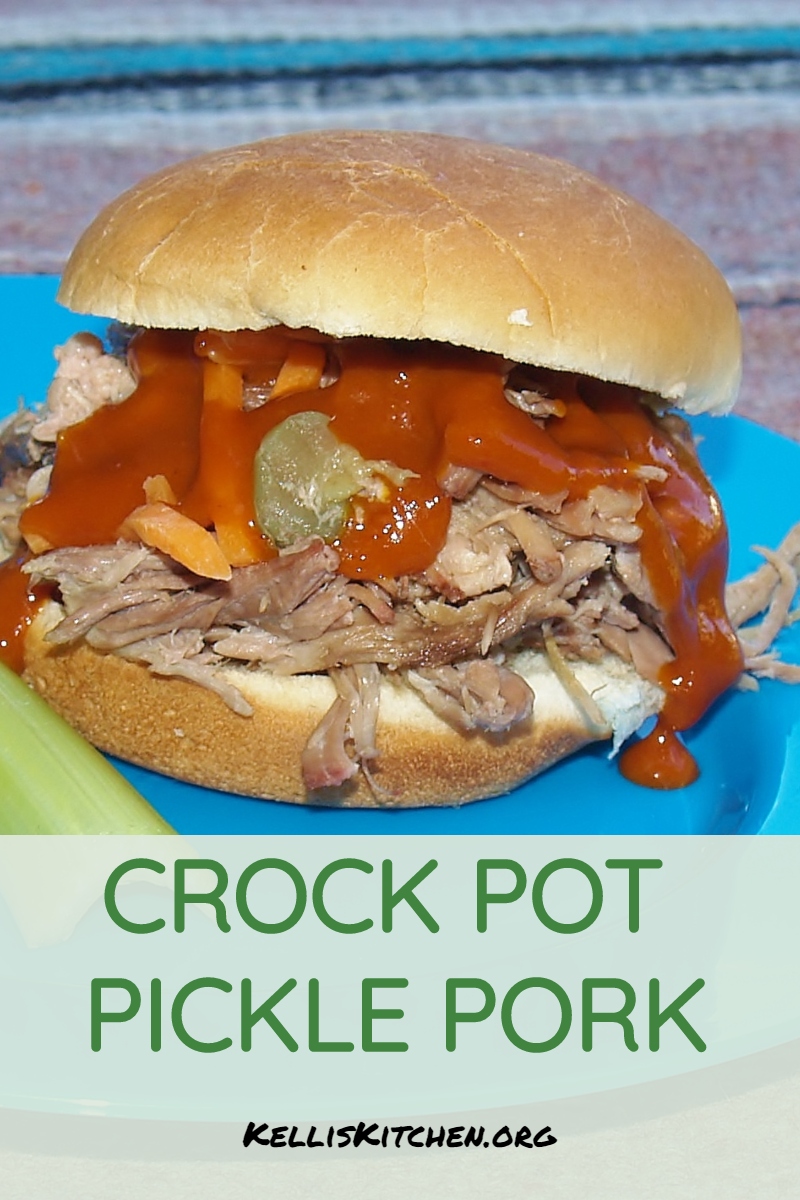 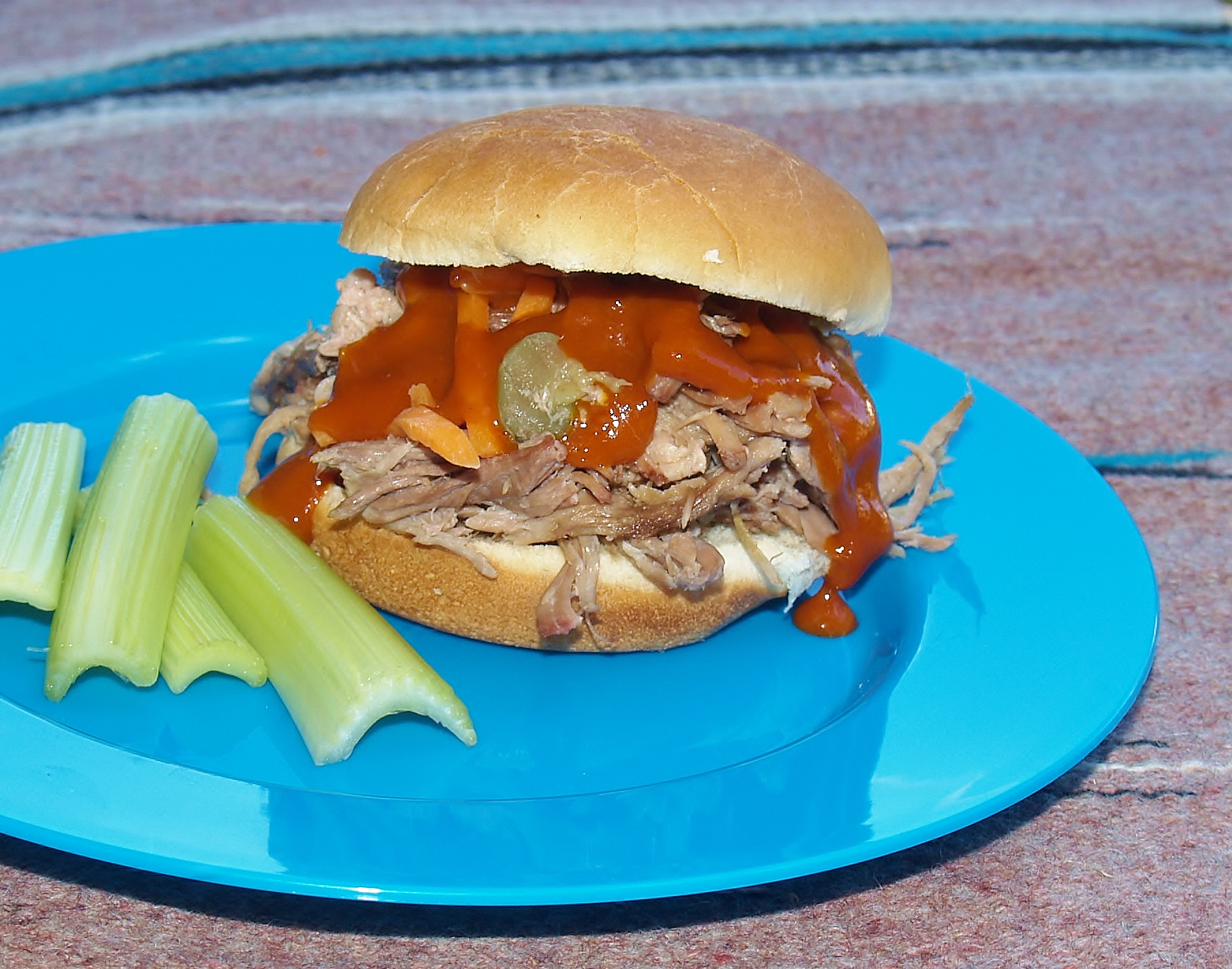 I received a comment on my last post that reminded me of how I found out the origin of my name. I’ve always liked it except for a few days during elementary school – and wouldn’t trade it for anything. My cousin Debbie reads this blog and I hope she will get a kick out of it.

In September of 1961, Mother Kalamity married my biological dad (Debbie’s uncle). I have always called him Buddy. When a parent dies before you are a year old and you are willingly adopted by your dad, things are sometimes dicey in the “what do I call him” department. So, as I said, they were married in September of 1961, I was born in October of 1962 and buddy passed away in April of 1963. Mother, a 23-year-old bride married Buddy who was divorced and had an 18-year-old daughter. My half-sister’s name is Pat. I have had limited contact with her over the years most likely because in the 60’s second wives and daughters of about the same age were not the norm nor were they acceptable in some social circles. I’m sure I was probably an embarrassment to Pat and her mother but I do not have ill feelings towards her because I may have felt the same way if my dad married someone my age and then she got pregnant right away. Pat asked me to be the flower girl at her wedding; yep that’s me at the First Baptist Church on her wedding day. At the reception I stuffed myself with white wedding cake and yellow frosting roses……that’s about all I remember. I still love white cake with big ‘ol frosting roses (the soft kind) preferably yellow. 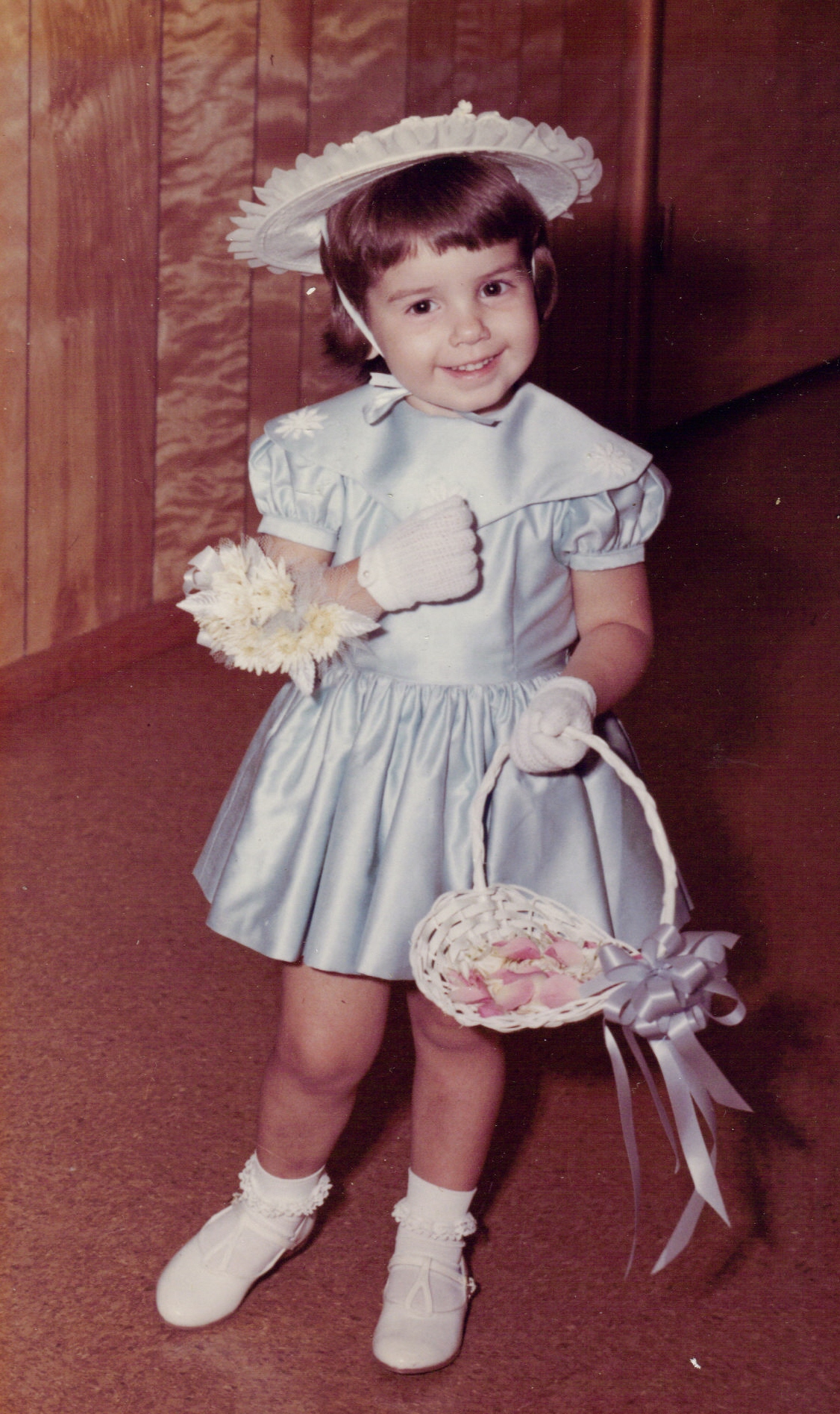 After mom and dad got married when I was 3, mother felt that I should have my IQ tested – who knows why but my dad seldom refused her anything so I took this test. The only part of the test I remember was that the very cold room smelled like glue and paint. At some point, the results came and then there was a flurry of conversation between mother and dad —well really mother and anyone who came within 200 miles of our home about where I should be placed in school. It was decided that I HAD to go to private school because the state of public schools was “just scandalous” in the 60’s – uh, yeah right.

The day came and I was carpooled off to school knowing no one else except my across the street neighbor Esther. She and I were going to be in the same class, if we had been segregated by classes. Mother put me in a plaid school dress with a huge white collar and black Mary Janes. Dresses were a must at Catholic school but at least there were no uniforms. When I got there, I expected to see something like the nuns from Sound of Music. Instead I saw slender, good looking; make up wearing hip nuns donning short shag haircuts instead of habits. Their order (I found out as an adult) was granted money from the diocese to use in a multi-year demonstration project showing a new and different way children should learn. If I told you what my “classrooms” were like, what we sat in, how we spent entire afternoons sculpting while listening to classical music or great speeches translated by nuns, and my first proposal with contract signing was in 2nd grade, you probably would not believe it in this A-B-C driven world. With the exception of “New Math” which was a dismal failure all across the US, this way of learning was pretty darn stellar and Sr. Rebecca Einhorn was right. To say I had a non-traditional early childhood education would be an understatement. One day I will tell you about it. 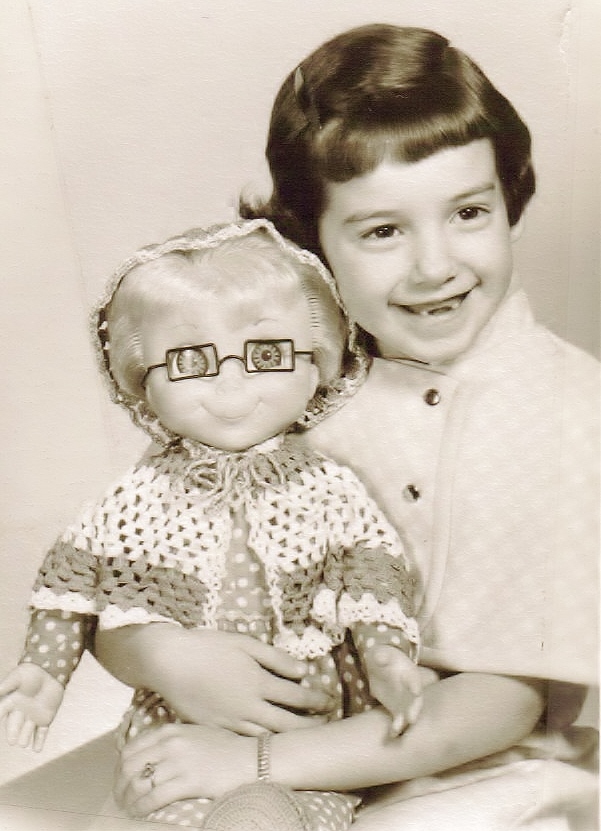 Me in the first grade but this is not my school pix – No one takes Mrs. Beasley to school!

About a month into the school year, I came home and had the following conversation with dad. I remember it like it earlier this morning.

“Everyone’s daddy is coming to school on Friday, can you come too?”

“I don’t know, I’ll have to check with Sr. Mary Edward but I think it is in the afternoon and everyone is so excited!”

“I guess Phil (Esther’s dad) will be there.”

“No, they all have the same daddy – daddy shorts. One other thing: What is my Saint’s name?”

“Your Saint’s name? You don’t have one.”

“Oh dad – sure I do! Everyone does and daddy shorts is coming to talk to us all about the confoundedness of it.” (“Confound it!” was a phrase my Nana used when really mad)

“Well who was I named after then?”

“Your mom told me you were named after that radio station in Tulsa that looks like a space ship.”

“I was named after a space ship?”

“No, you were named after KELI radio station and the building LOOKS like a space ship. What time will your mother be home from work?” 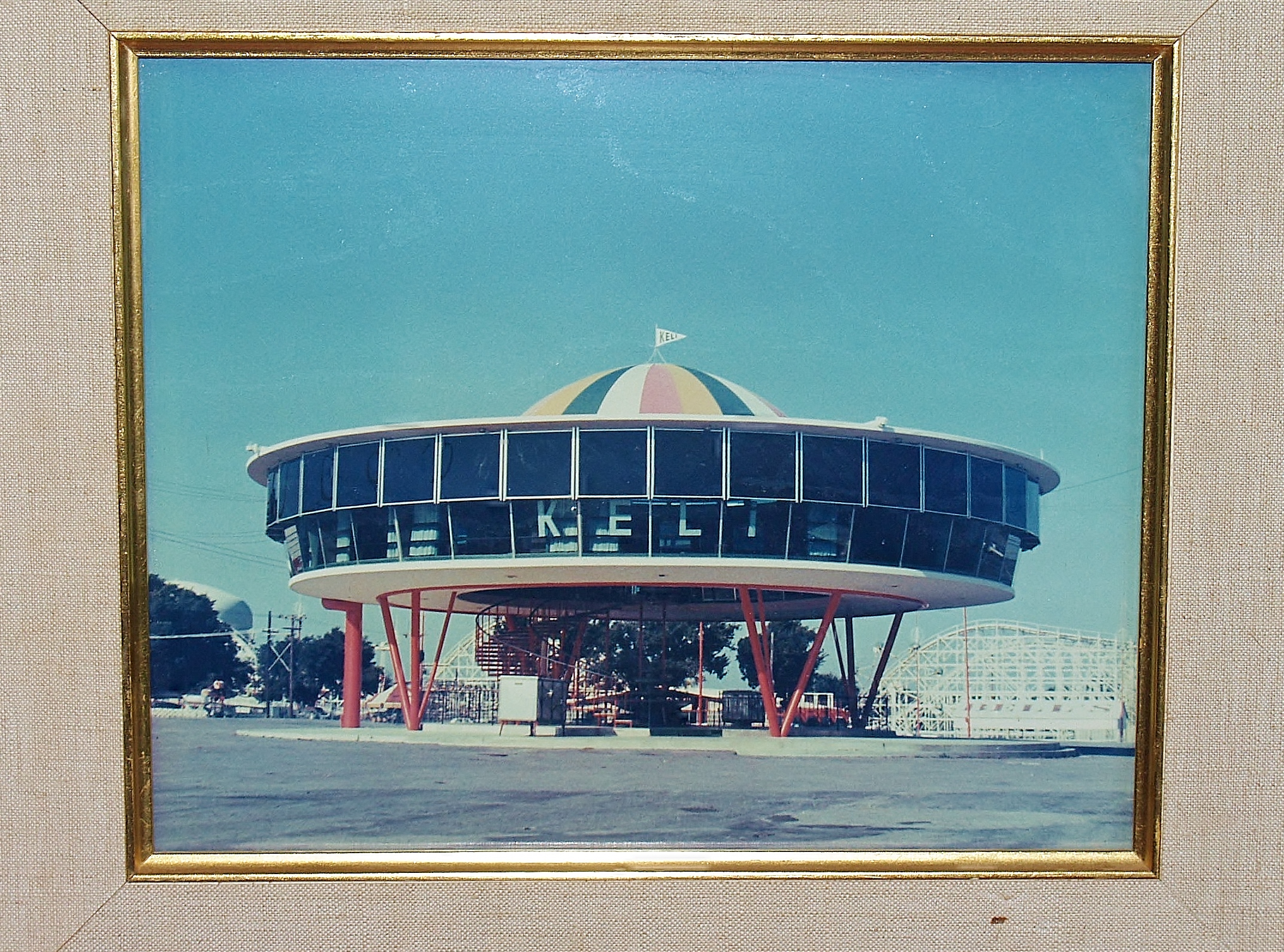 I believe that’s when the bawling and squalling began. Mother, a career woman, finally arrived home and clarified these things:

1 Father Schwartz, not daddy shorts, would be coming to the first grade class Friday afternoon and he was NOT everyone’s father except mine. (sounded the same to me)

2 He was coming to talk about confirmation, not confoundedness. (sounded the same to me)

3 Only Catholics have Saint’s names and we are not Catholic. (What’s the difference?)

4 Yes, I was really named after a radio station in Tulsa. (My life is ruined). I was named in order to somehow build a bridge between Mother and Pat………really? There were only five years difference in their ages – they didn’t need a bridge, they just needed a Coca Cola party during American Bandstand and they would be bonded for life! But me, I had to bear this shame forever!

When we got to school Friday, we all had to stand one at a time and tell who we were named after and what our saint’s name was. I hung my head trying to hide behind the bean bag chairs so I wouldn’t be called on and yet I was. Did Sr. Mary Edward not know I was a non-Catholic? Why would she ask me such a thing? Fighting back tears I stood up and told them I was named after KELI radio station. The statement hung in the air for what seemed like hours until a boy said, “COOL, I wish I was named after a radio station” and everyone agreed. From that day on I was happy I had such a unique name story. Peer pressure and group acceptance was important in 1st grade.

I got my chance to change the name when I was legally adopted by my dad (August 23rd). Our attorney, mom, dad and I went into the judge’s chambers listening to the screams outside of two young women who stole a car and escaped from Helena – a reform school – but were being sent back. Right before he signed them – which by the way he said was the best thing he had done all day – he asked if there was anything else I wanted to change like my first or middle name, where I was born, or the date. He said I could be born in Paris, France if I wanted and my name could be Goldie (Goldie Hawn) or Tuesday (Tuesday Weld) if I wanted. While my parents knitted their eyebrows together in concern at calling me Goldie or Tuesday for the rest of my life I contemplated changing it but I thought my radio station story was better than being named after a metal or a day of the week so I kept it, just changing – rather adding my last name.

That’s the story of how I was named. A few years ago Mr. Picky Eater and I were at the flea market when in a big old pile of crap, I spied a framed picture of the space ship-looking radio station with the call letters spelled out on the glass. I grabbed it and thought I could get it for a buck or two. Nope – $30. $30???? What the heck?

Apparently a man named Les Garland started out at KELI and eventually was the co-founder of both MTV and VH-1. Well that makes about as much sense as paying $30 for a picture of the chair that the President sat in when he was in college. Still – I paid it. It hangs in our house now and every time I see it, it gives me a little chuckle.

I suppose it is time for me to get to the recipe and stop rambling…..I found this over at Juanita’s Cocina and it is a keeper. Very simple slow cooker recipe that has so many different uses, you will make it again and again. I made mine a little different but go on over and check that one out too – it’s great! 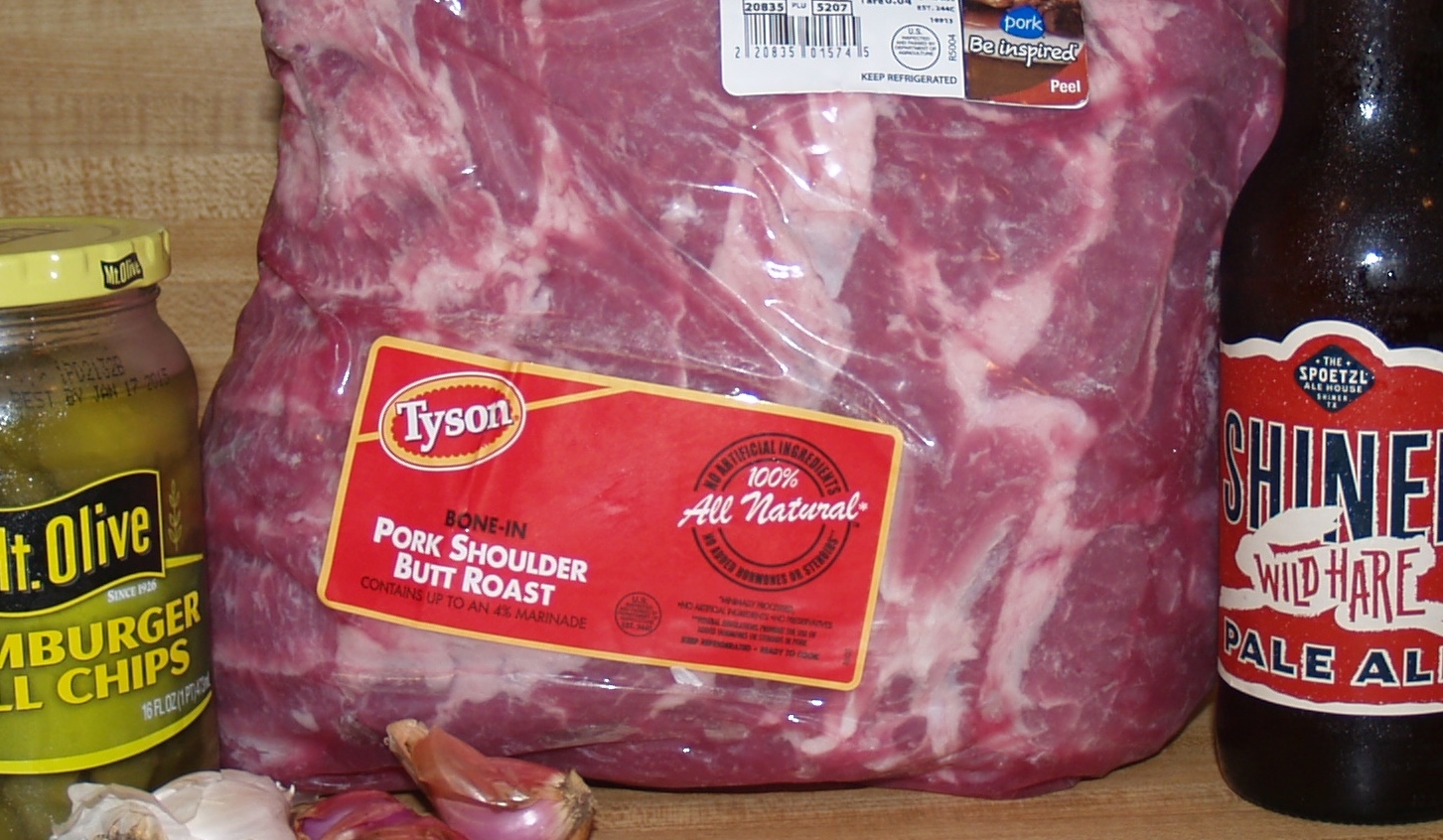 Pork butt or shoulder (mine was 8.75 lbs)
Four cloves of garlic and 4 shallots peeled and minced.
One bottle of any kind of beer or 12 ounces of water.
One 12 – 16 ounce jar of hamburger dill pickles, yes all of it.

Place the pork butt into the slow cooker, pour in the beer/water and then all the pickles sprinkling the garlic and shallots on top. 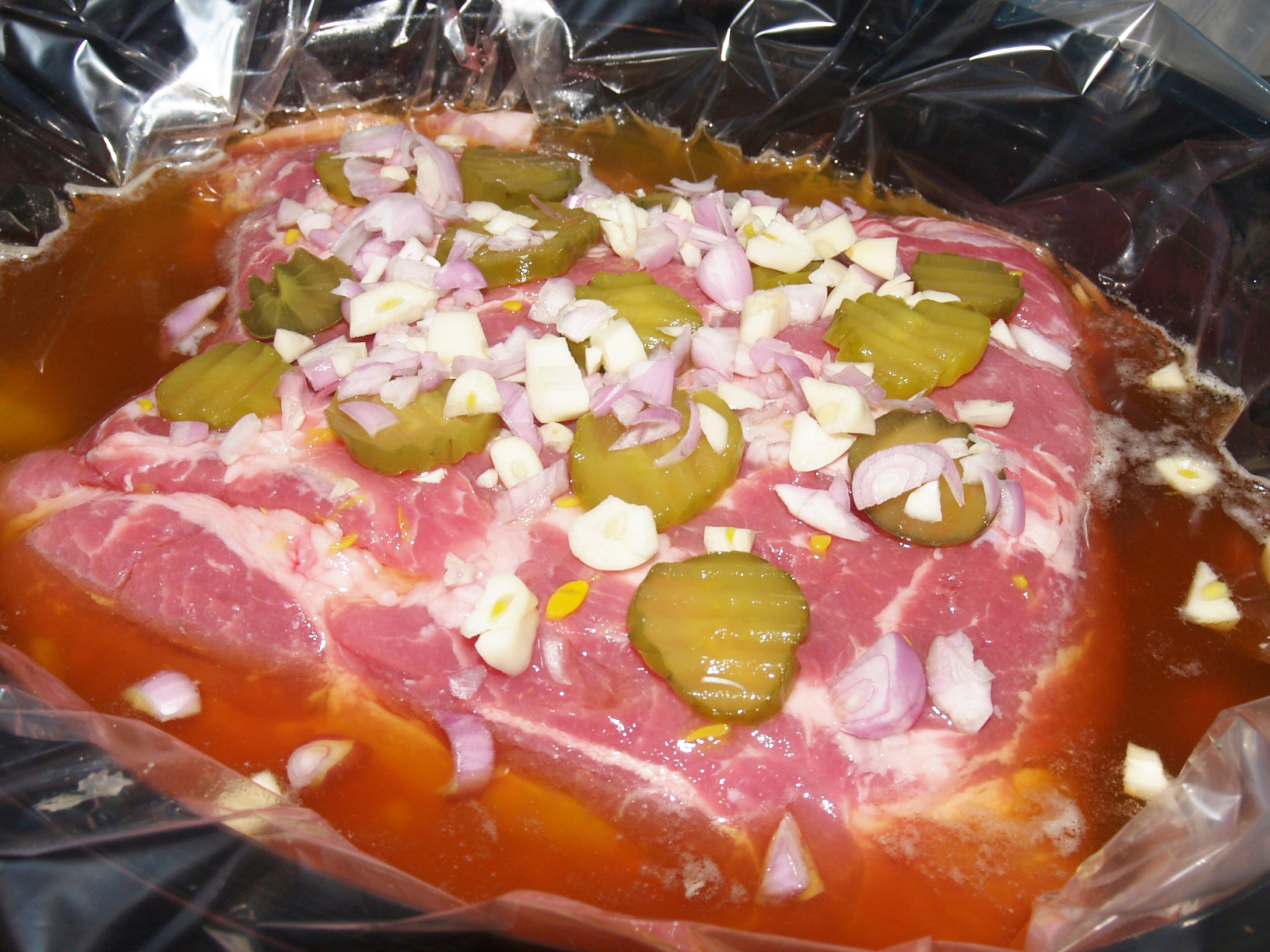 Cook on high for 8 hours or low for 10 hours. Shred and serve.

These pictures depict the pulled beef and “porkles” as Juanita calls them on a sandwich but we put up one pound packages in the freezer. They will be easy to take out of the freezer and add homemade bar-b-q sauce, or sloppy Joe sauce. We can make enchiladas as well, but the one I’m looking forward to the most are my steamed pork and potato burritos. Those will be fantastic! 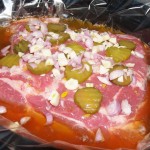 Serve as pulled beef and “porkles” sandwich. You can put up one-pound packages in the freezer. They will be easy to take out of the freezer and add homemade bar-b-q sauce, or sloppy Joe sauce. You can make enchiladas as well, but the one I’m looking forward to the most are my steamed pork and potato burritos. 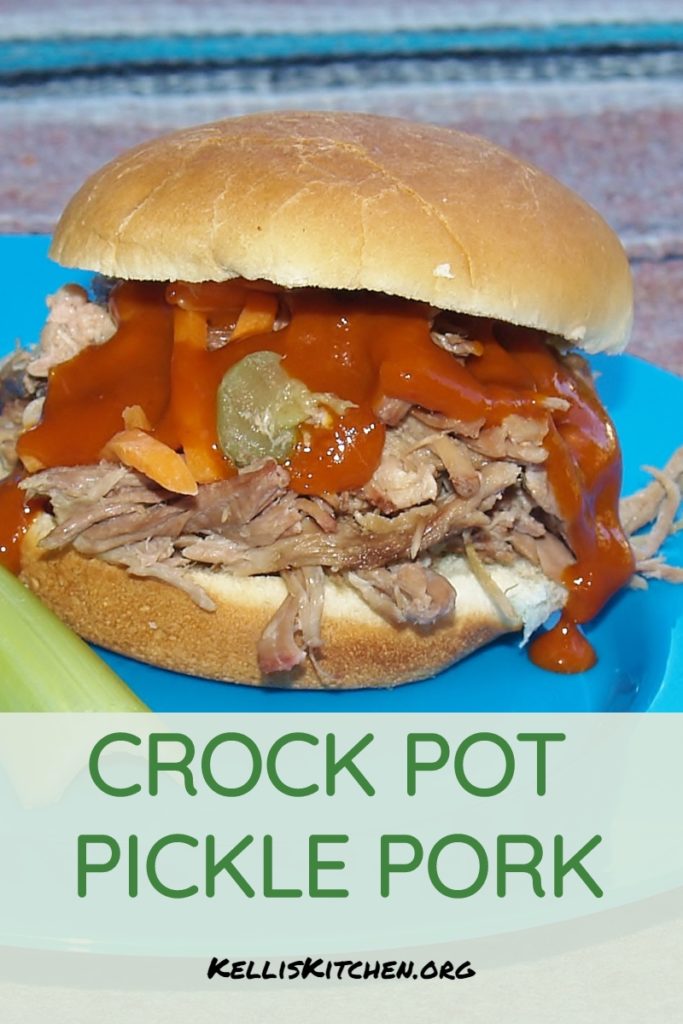