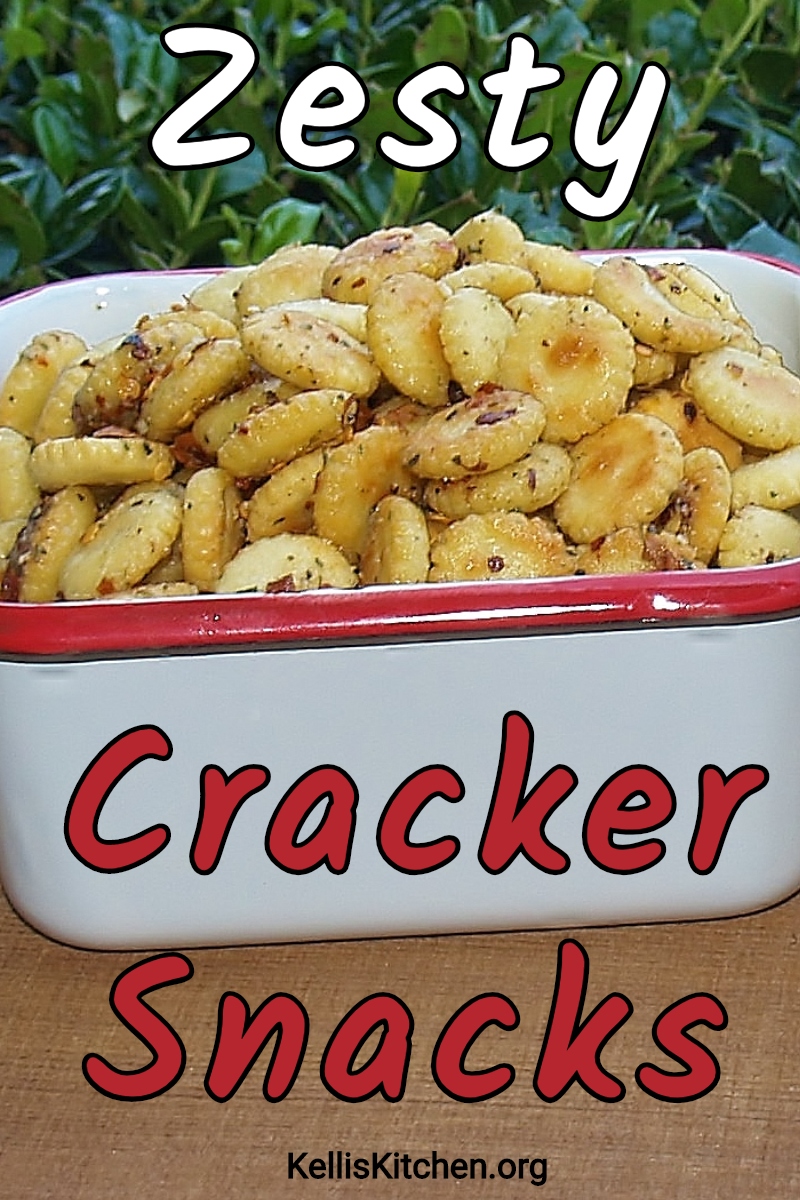 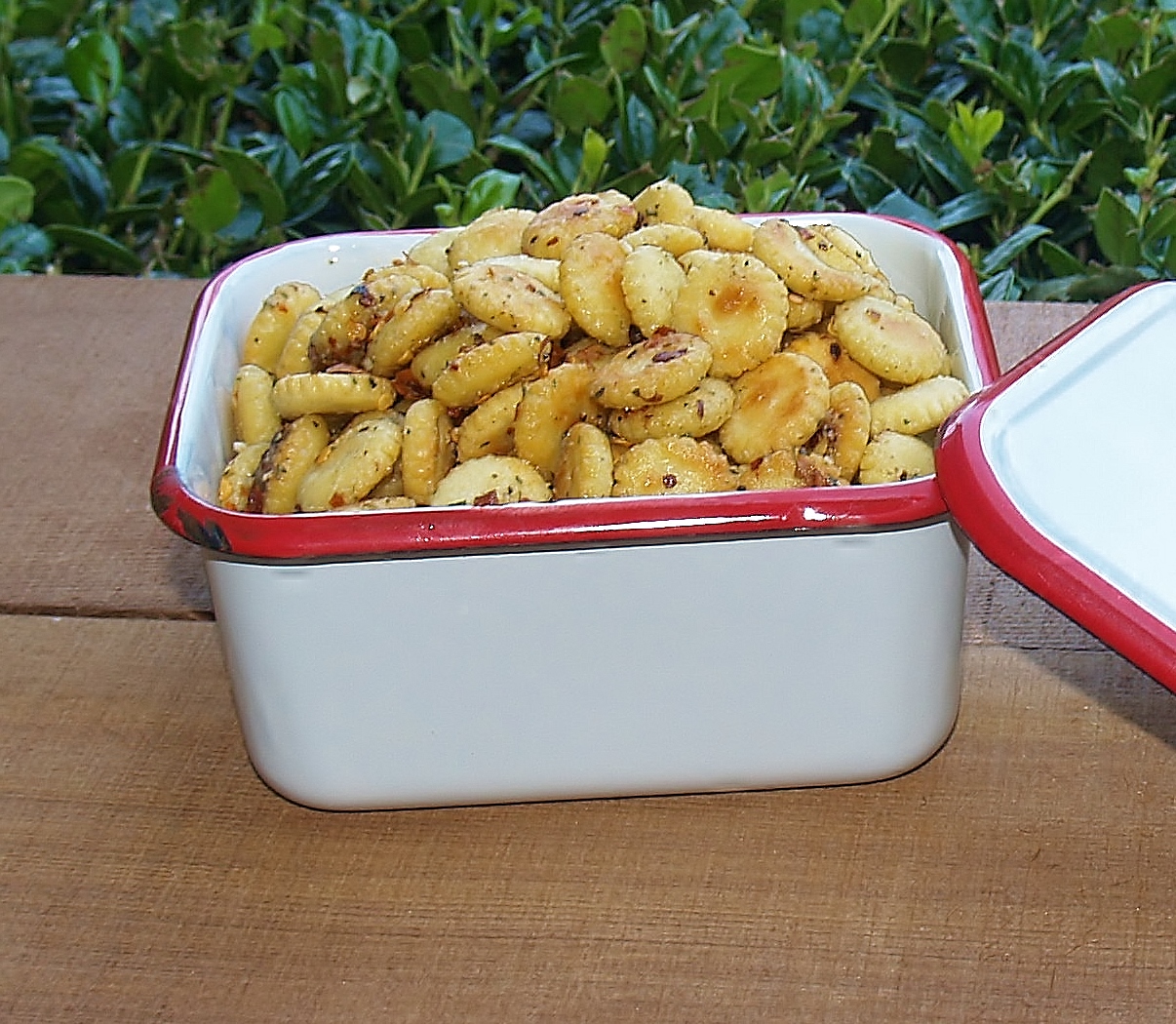 A few days ago I was talking to my co-worker on Face Book and she told me to look up a recipe called Alabama Firecrackers. I obliged and as soon as I saw it, I was taken back to age nine: 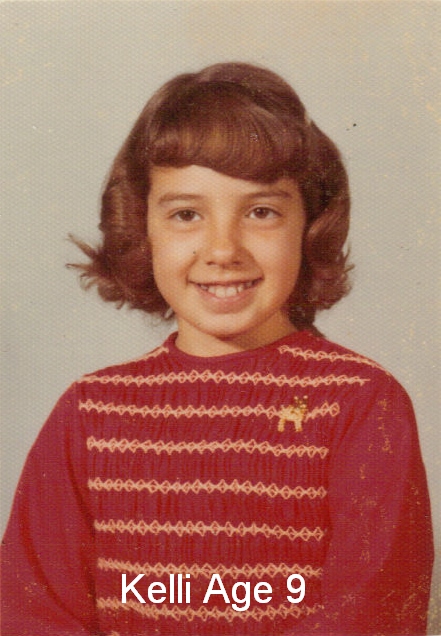 Yep, that’s me back when my hair was only wavy and not crazy curly like it is now. That happened when I was about 13.

My Nana’s sister and brothers lived in Haileyville, Oklahoma. She and my Jim-Pa were the only ones to move away so he could drive the dray and eventually become the sheriff. As I’ve told you before Nana was born in 1903 in Indian Territory which later became Oklahoma. There were several children born to Nana’s family – among them were Capitola, Burl, Phil, Nana, John and the baby was Lester. Capitola married a man named Pearl and they had a daughter named Shell but Capitola passed away during childbirth. A year or two later John married Pearl and they became our only famous family members. Their picture and a story about them was in Ripley’s Believe It Or Not museum for several decades. When their marriage license was published in the newspaper someone picked up on it and Ripley’s asked for verification even sending someone to Oklahoma to make sure her name was John and his name was Pearl – it was. Uncle Burl married Wealtha and together they had 11 kids! All of them have two names – I always thought that was interesting and when I was nine I used to say all their names in a sing-song voice as I entertained myself while visiting: “Norma Belle – who was married to a man named Babe (really that is his real name) and he is a preacher in Kansas. Effie May, Wilma June, Jimmy Dale….this is where things get hazy. I used to know all their names but nowadays, not so much. Uncle Phil was a tall, incredibly well dressed bachelor who lived alone on his farm and when we visited him he would grill the most wonderful steaks . My uncle Lester married aunt Lois (here they are with my Aunt Shirley – mom’s sister). 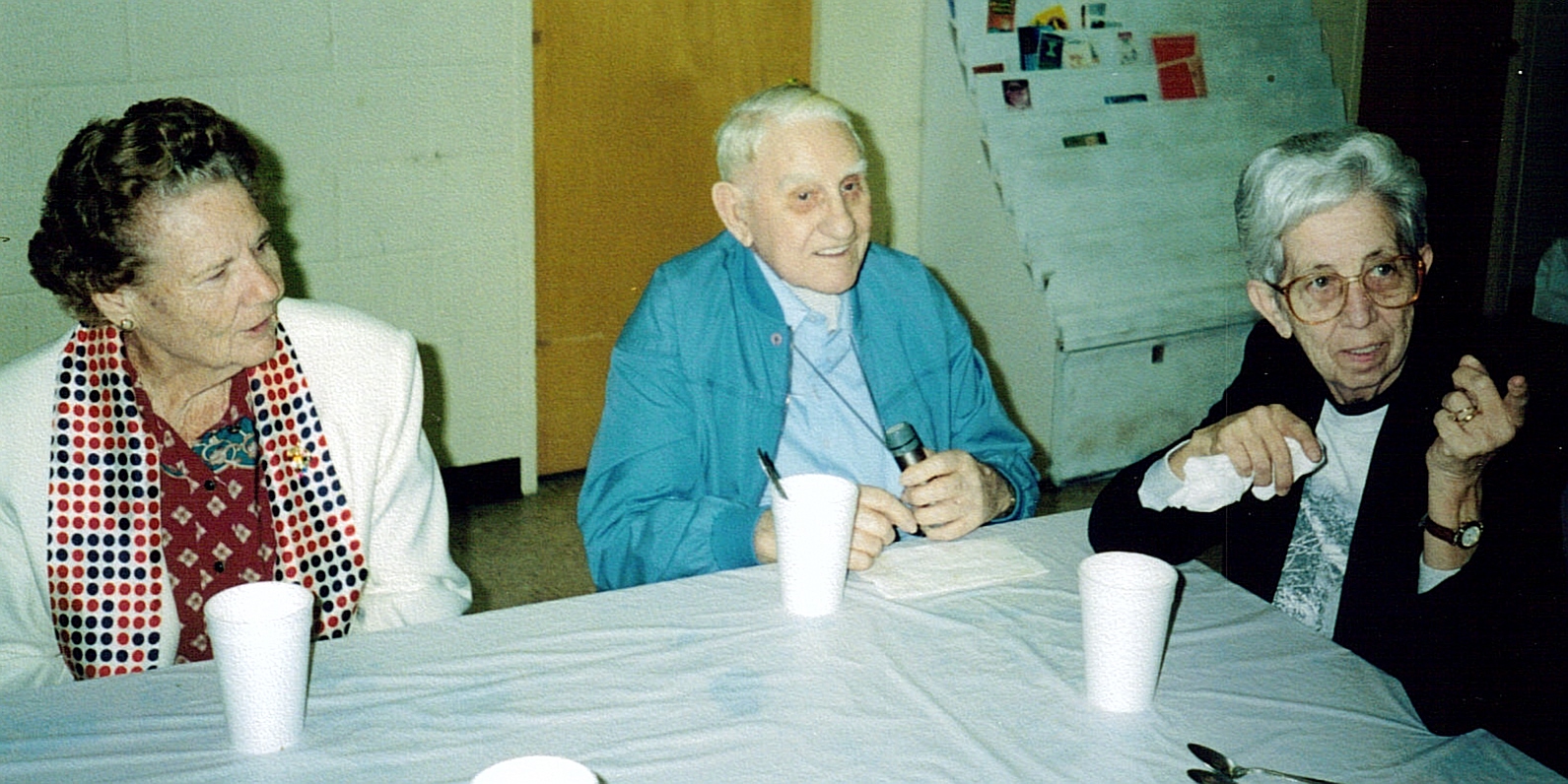 I loved listening to Uncle Lester because he had his voice box taken out long before I came along so, as you can see in the picture, he had an amplifier to speak. It made what most people thought was an awful noise but not me – somehow it seemed soothing in that static-y monotone. When we went to visit Nana and aunt Lois would go to the garden or to pick sand plums, Jim-Pa would go lie down to nap and uncle Lester would get out his famous treats served in the exact enamel lidded container you see in the picture. He would set it on the table, get us some napkins and ask me what I wanted him to tell me about THIS time.

I sat in complete silence (kind of a big deal for me) as we ate these crackers while he told me how he, aunt Lois, Aunt John, Uncle Pearl, Uncle Burl, Aunt Wealtha and Uncle Phil all went to California to pick fruit when the tractor changed how we farmed in Oklahoma. Most people thought the Dust Bowl made all the Okies go to California but it was more the invention of the tractor. Okie is only a derogatory term outside of this state. We all know what Dumb Okie means although the first time I heard it I was pretty insulted. Uncle Lester said I shouldn’t feel that way, honestly was no big deal because “We” got it over on them, not the other way around! We are getting to my favorite part of all the stories now, but we generally took a break at that time while he got us two glasses and homemade lemonade from the fridge since the crackers were so spicy, but that’s the way we liked ‘em! 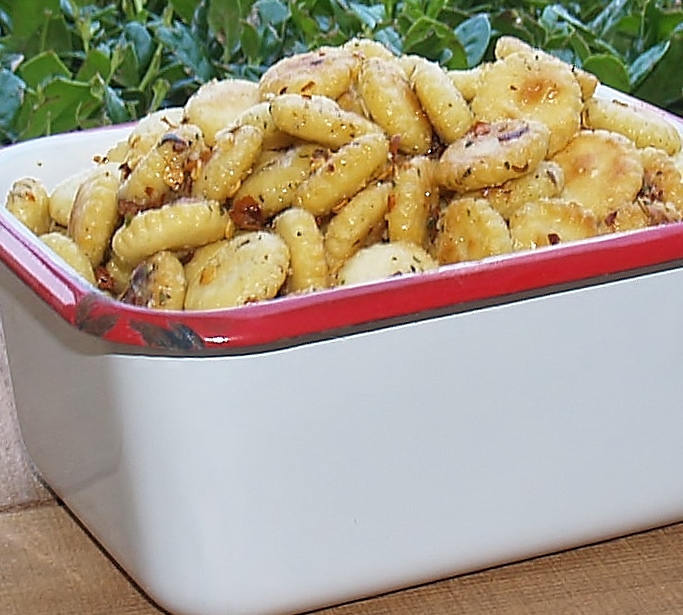 Uncle Lester said it was a hot dry dusty July day when he and all the family, minus Nana and Jim-Pa, headed for California where they heard there were jobs. There were no jobs in Oklahoma and nothing could be grown on a farm because of the terrible drought. When I told him that out-of-staters, especially those from California said Okies were poor. Uncle Lester said, “Well – we WERE poor, so that’s not wrong”. He told me when they arrived in California they were sent to encampments where they had to stay after a certain time in the evening and we not allowed to drive their own cars to work. He shrugged it off saying that they were tired at night anyway so why would they need to leave anyway? Interestingly, women could pick just like the men – but back home in Oklahoma women would have stayed home and not had a job that paid. They had a neighbor s in the encampment – John Griffin and Jimmy Leake. Really? I could not believe it because they were from my hometown and the owned TV stations (their families still do) and the Griffin’s had the mustard! Later, I would date one of the Griffin boys who was a grandson of John and his namesake. He also became the District Attorney in our small town.

But the Griffin’s and Leake’s are RICH RICH RICH people! Rich like the Rooney family – Uncle Lester agreed with me with a nod of his head. So I would ask, why aren’t WE rich too? He would lean into the kitchen table, taking a few of the crackers to pop in his mouth . Then he would lean WAY back in his kitchen chair linking his fingers behind his head and as he chewed on those crackers he would say. “Well we ARE rich”. But how were we rich? We didn’t own a TV station or a grocery store. He would smile and the story would continue on.
They all stayed for a year and when they came home each one of them had $500. With that money, they all bought adjoining property and the bought as much as they possibly could afford – continuing to live in the tents they lived in while fruit picking. Things were still hard when farming until one day, someone decided there may be gas on Uncle Lester’s property. All farming production stopped while land was tested. This property that was full of rocks not only had gas on it, the land was full of oil!

Apparently, my Uncle Pearl enjoyed all the money the oil and gas brought the family because not only did he drink, he had an eye for the ladies. Aunt John, a tiny woman who was less than 5 ft. tall and wore a size 3 shoe, divorced Uncle Pearl in the 40’s making sure he got nothing including the property then went on to oversee oil and gas production for the 5,000 acres she now owned alone – while raising 3 children. She continued to oversee it all until her death in 1996. 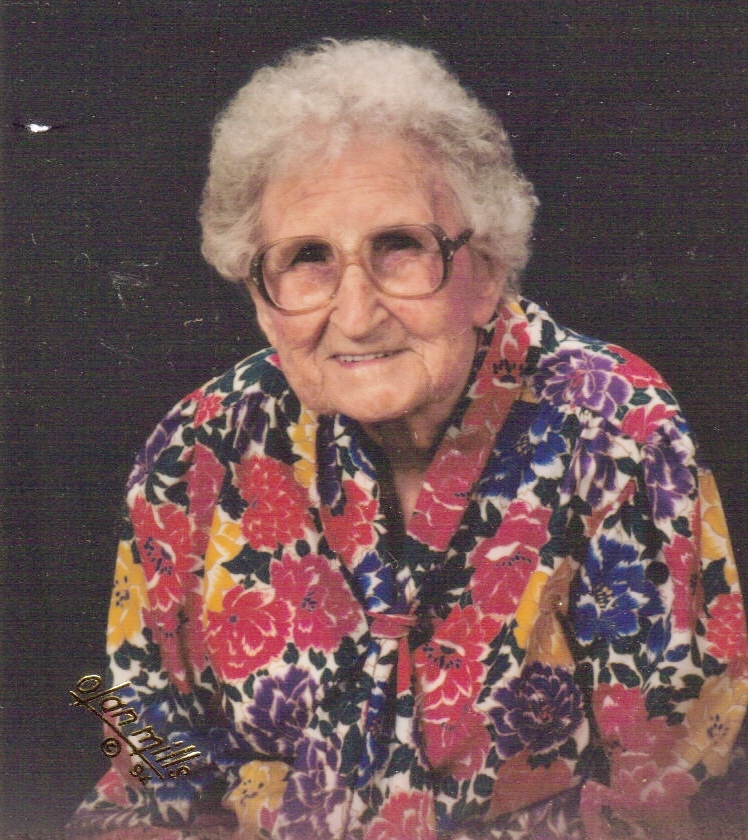 While none of the family ever lived an extravagant lifestyle (some of them never had air conditioning!) they certainly could have. My favorite part of visiting the family was getting to gas up the trucks. They never went to a gas station – they all drove down behind their houses to a big tank that held propane. All of them had their vehicles converted to propane tanks long before it was the cool thing to do.
My line of the family was the only part that didn’t go to California and bring back money to purchase property. Technically, our part of the family was poor. But the good news is that after Uncle Lester passed away in 1988 I got the recipe for his famous crackers from Aunt Lois and now I’m sharing them with you here.
You will need these items: 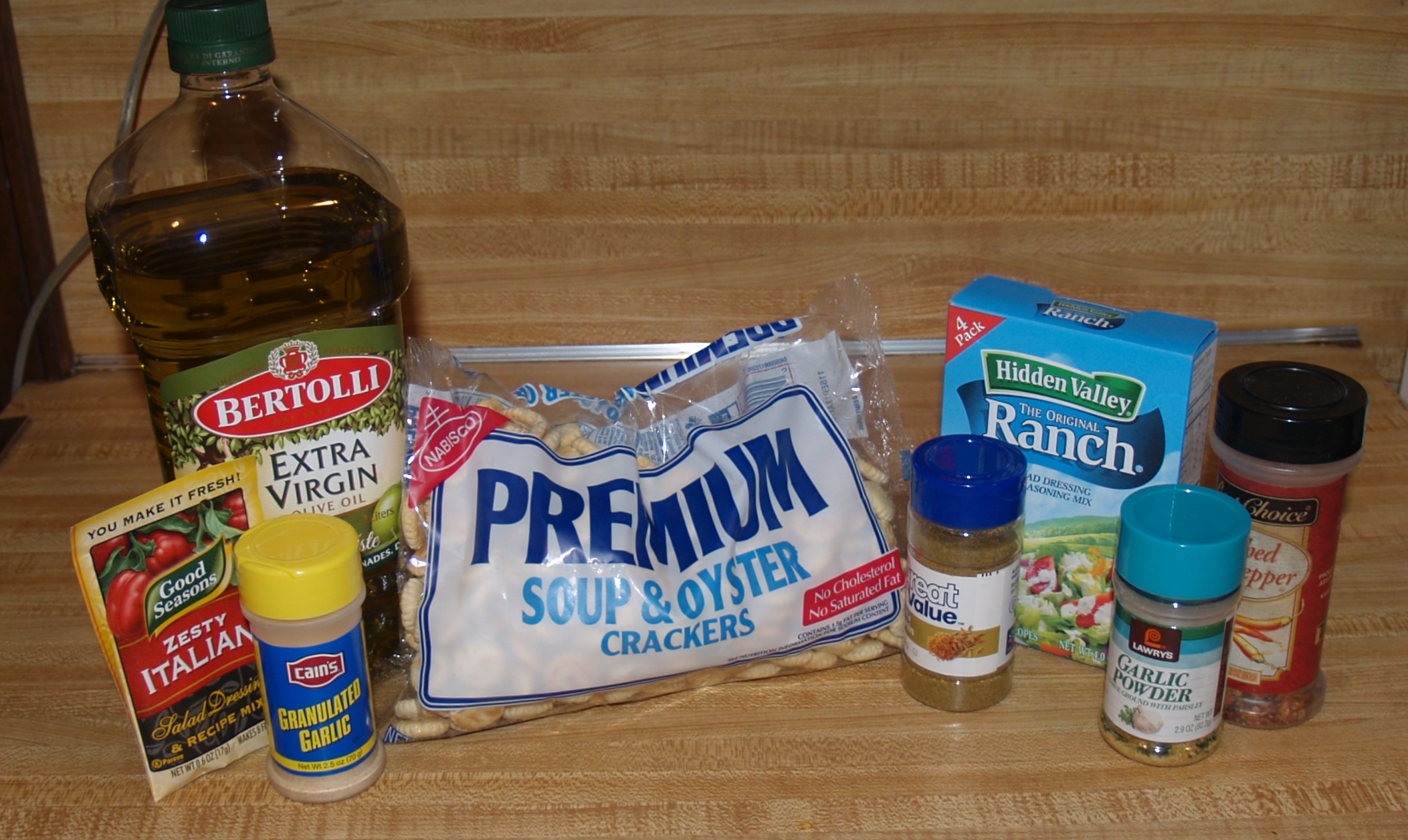 Directions:
Add all ingredients, except for crackers, into a bowl and whisk. 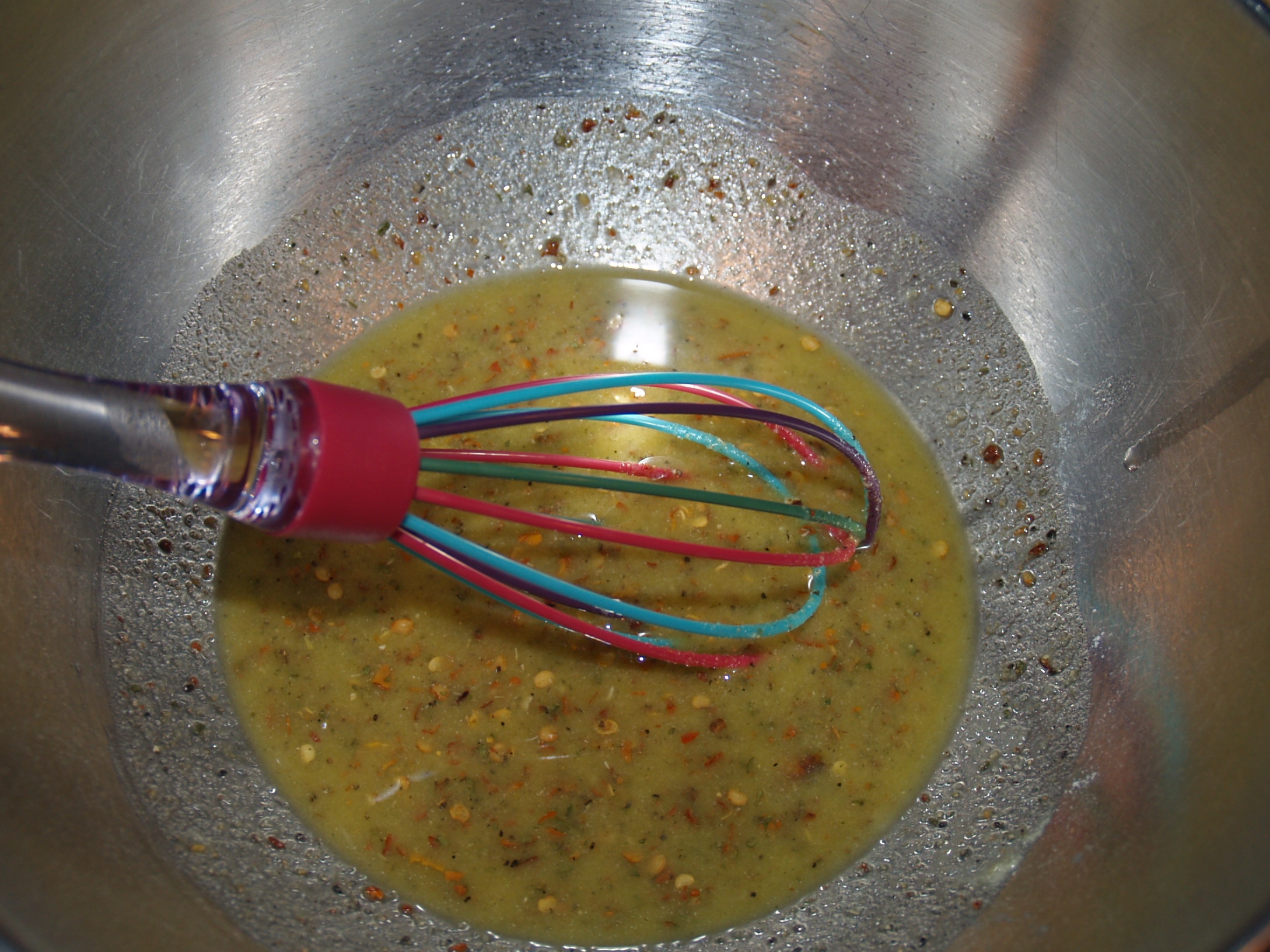 Pour into a Ziploc bag and add crackers.
Pour a little more olive oil into the bowl and swish around to get everything out and pour it into bag.
Shake them around, and then lay flat. 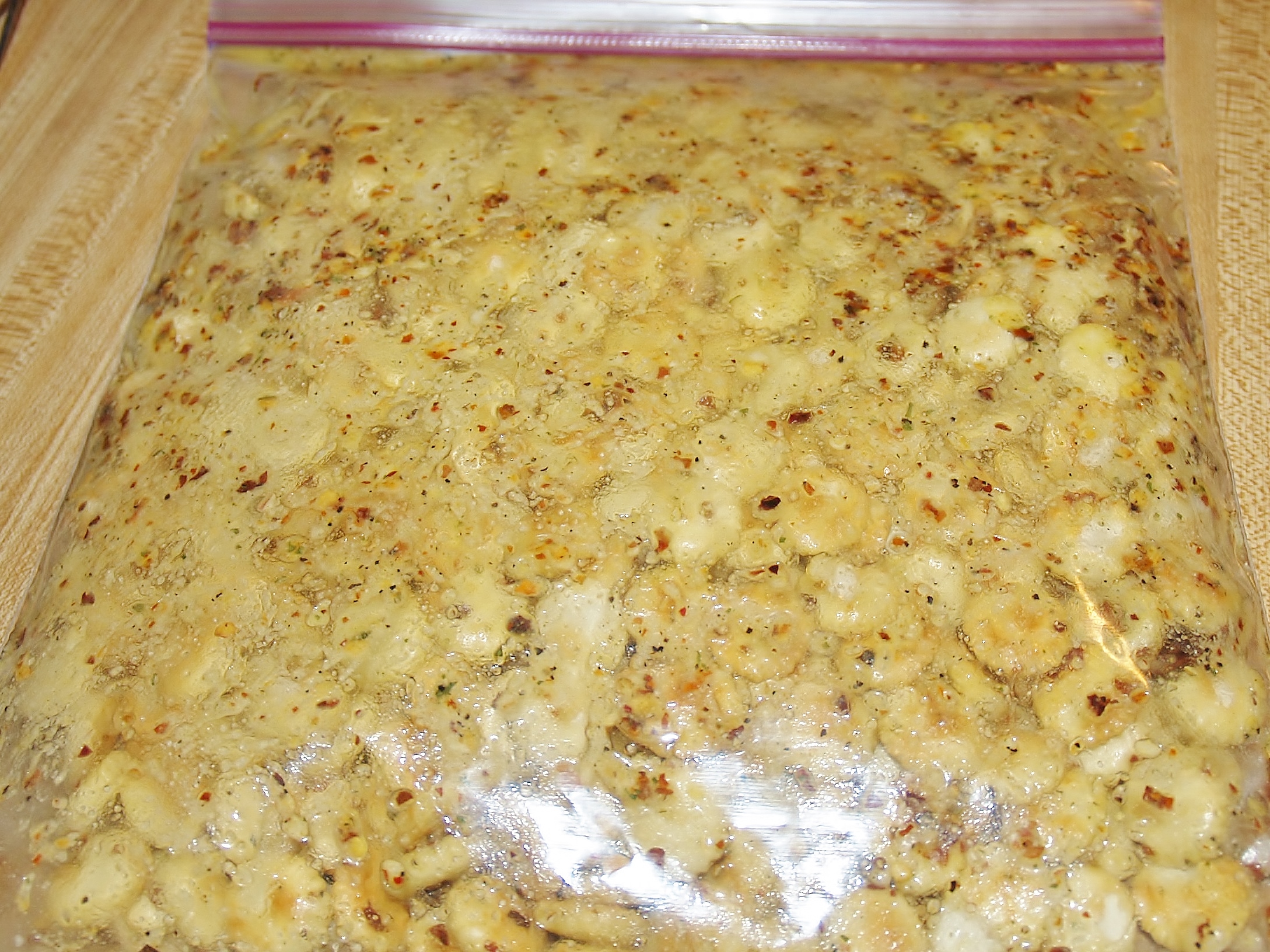 Every 20 minutes or so turn the bag for a few hours.
Leave the bag on the counter until about the same time the next day .
You will see that the crackers have soaked up all the oil.
Put the crackers into an airtight container and snack on them often! They are also good with chili. 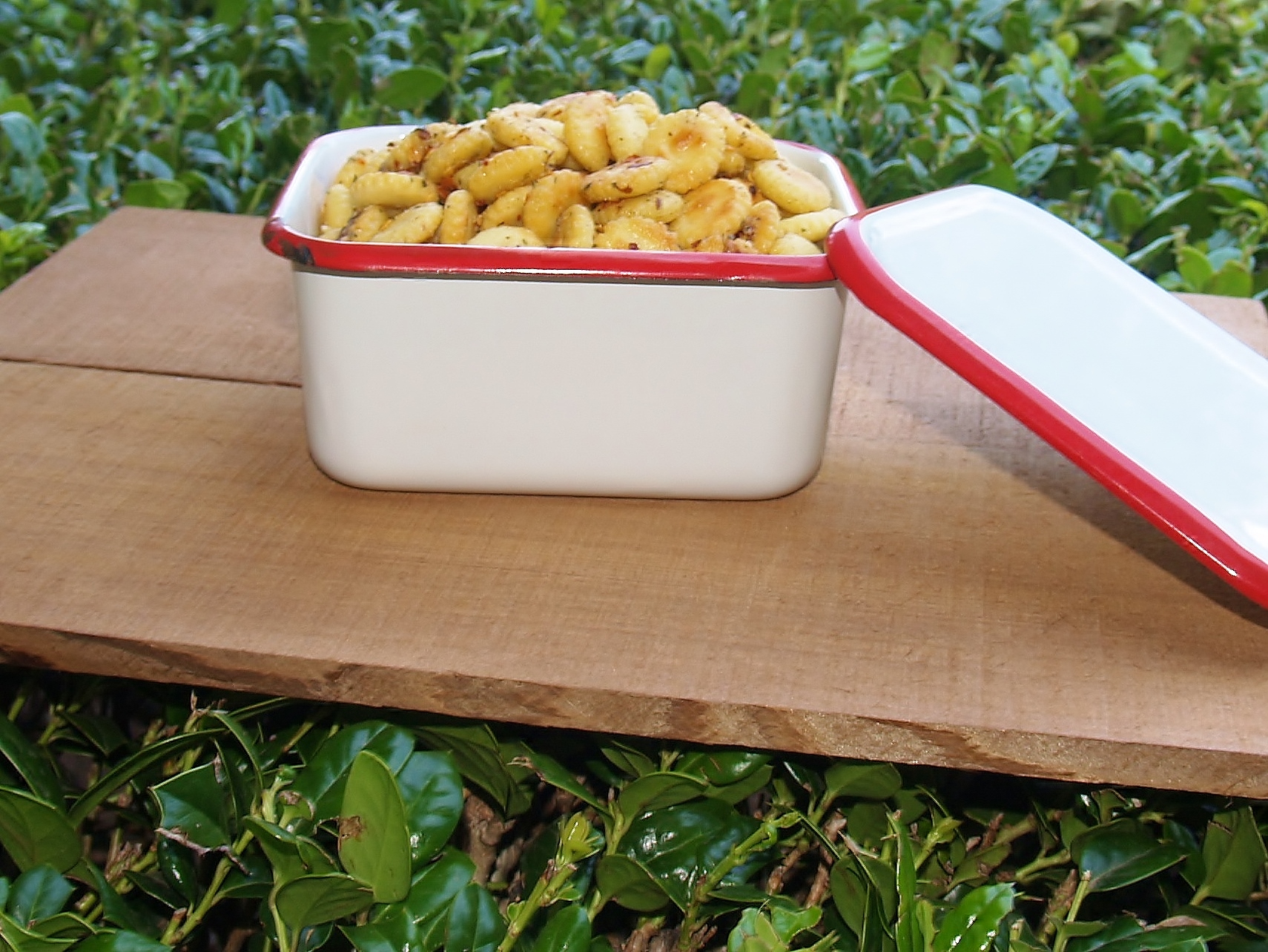 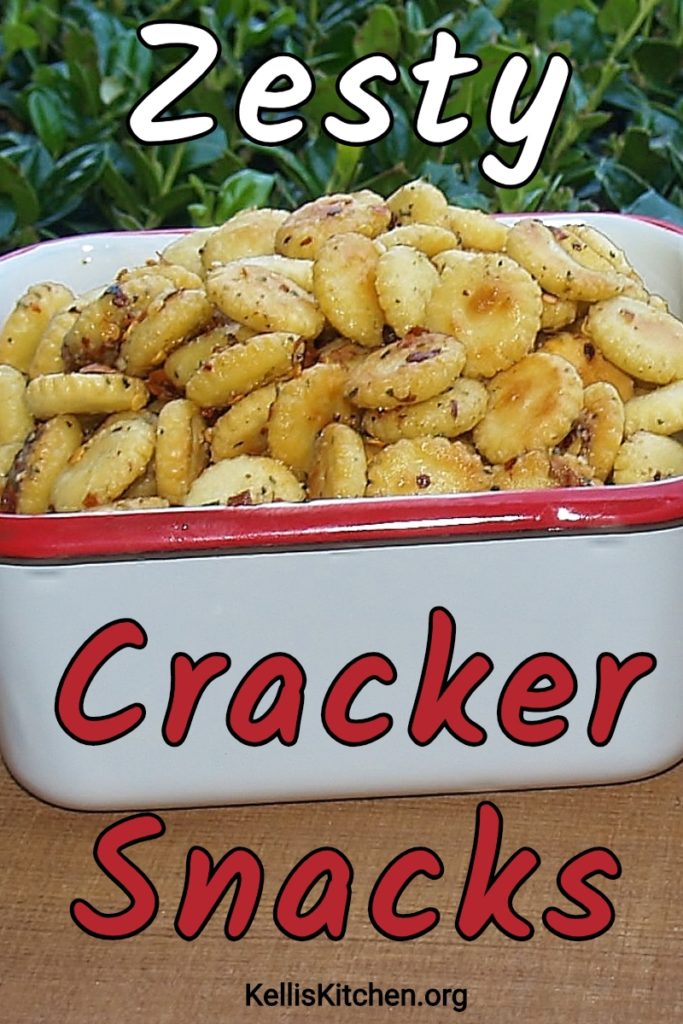 I linked up at this great party too! http://sparklesandastove.com/all-things-pretty-linky-party-16/

Sharing at this great party! http://www.thisgalcooks.com/2013/07/14/link-party-marvelous-mondays-55/