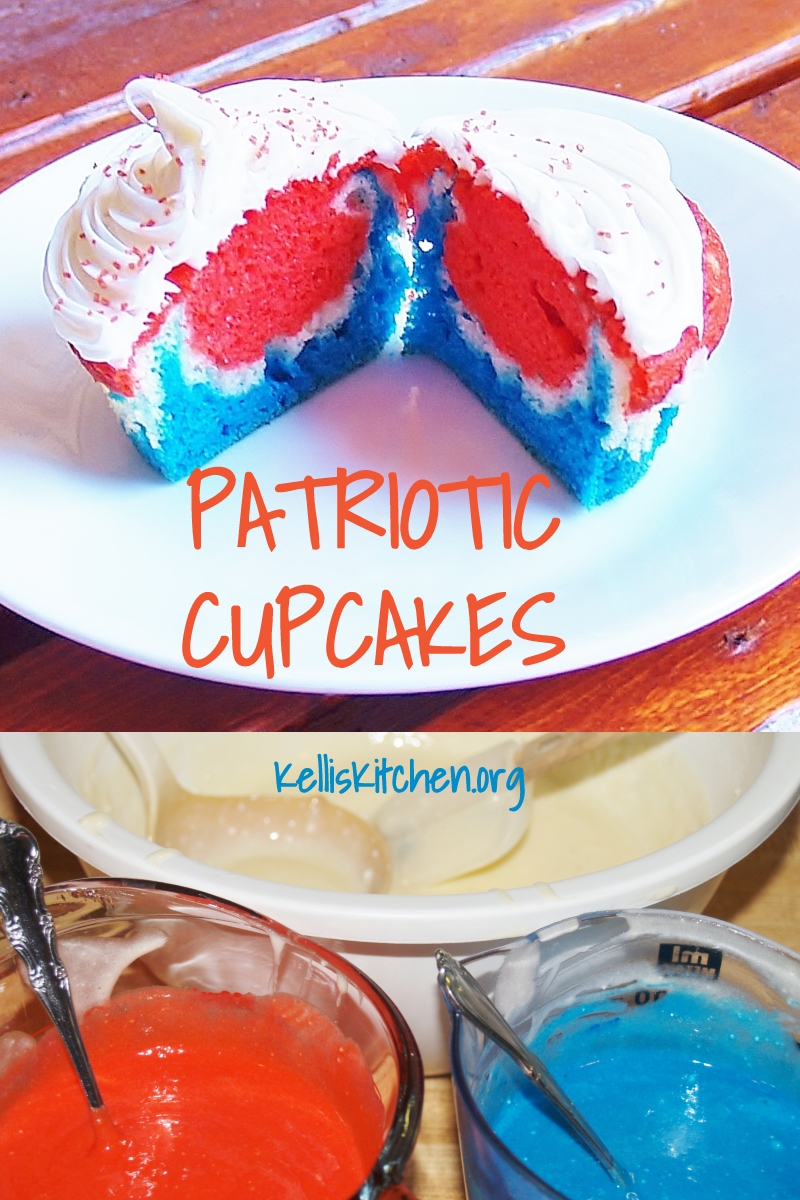 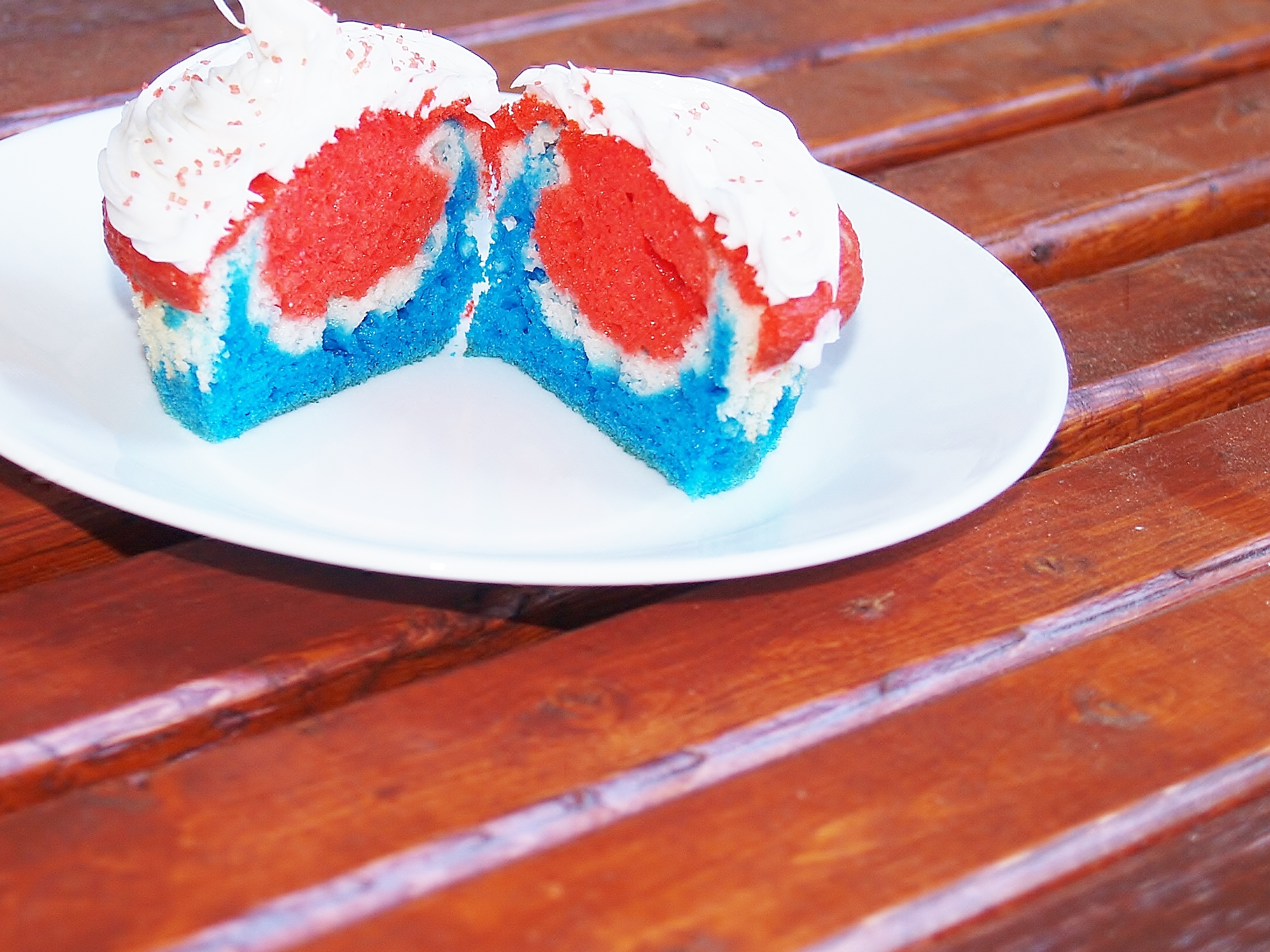 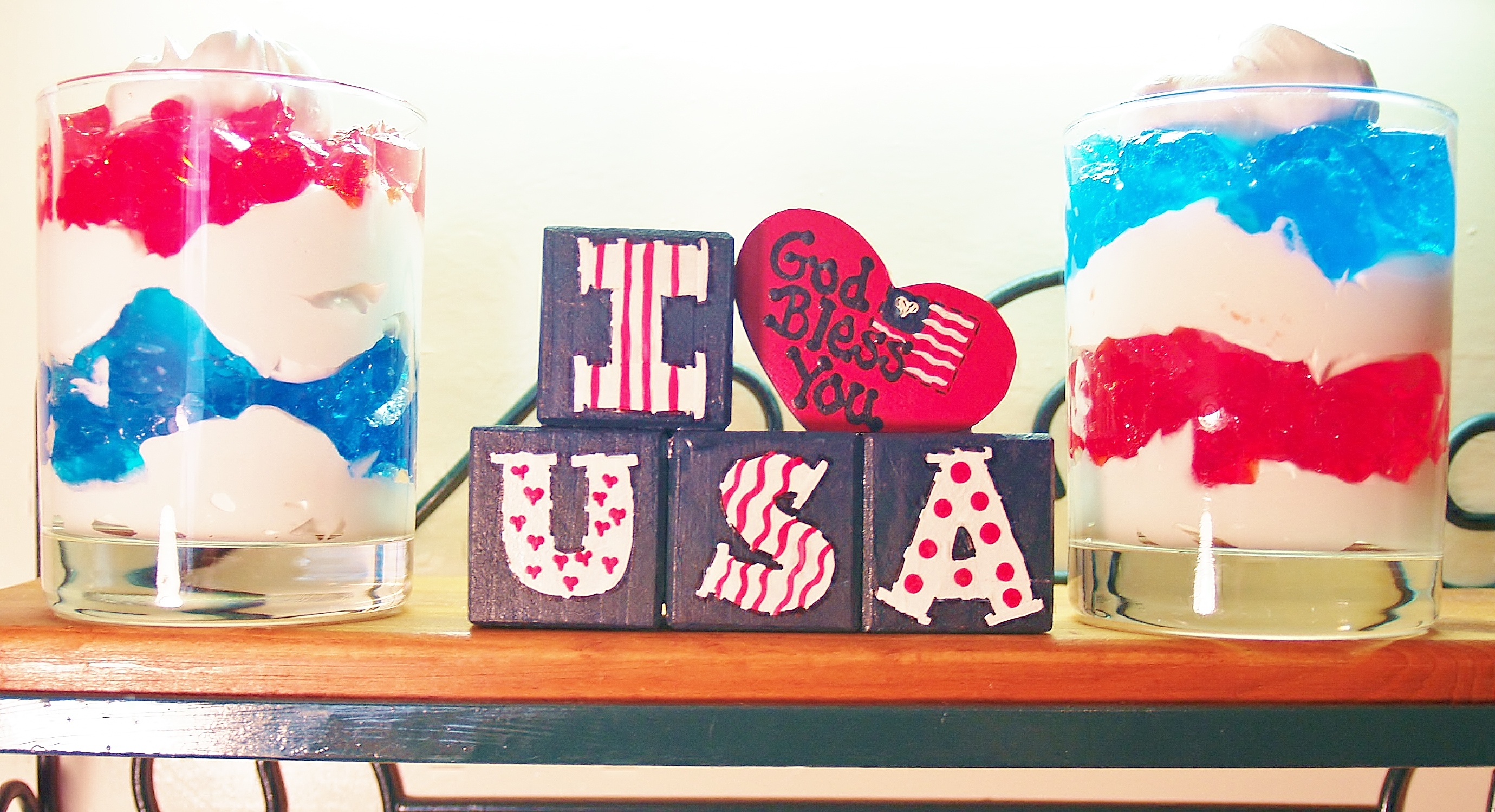 I was unable to post this weekend and for good reason! Friday morning we got up and as I went into the kitchen to begin making a recipe for a post, Mr. Picky Eater went out on the porch to see how hot it already was getting at 8:00 AM. He came back in and said that The Foreign Lady (this is her nickname because we could never understand what she called herself) was pulling boxes and things out into her driveway. Mr. Foreign Lady (Yep, that’s what we called him) passed away a few weeks ago and I assumed she was donating all her things for pick up. I was afraid she would need some help so I went over to talk with her. I learned three things: That was not her stuff, she is of German descent from the Baltic Sea area, and her first name is Svetlana. Not bad for the first 3 minutes of conversation! She told me the boxes were from next door. That home has been rented many many times since we’ve lived in this neighborhood and we never really get to know them so they too have names that we make up – I guess we are like the people on Seinfeld. There are several people who were living there so we will just go with Blondie, the oldest blonde lady living in the house. Svetlana said they had to be moved out by Sunday night. I looked over that way and saw blondie – who is about knee high to a grasshopper – and two little boys around 5 and 9 years old. I asked where all the other people (adults) were who had been living in the home as there were often 5 cars parked over there. Svetlana said they were all gone. I was pretty surprised that this little bitty woman and two small boys were going to move a houseful of furniture. Being the social worker type I am – I must moseyed on over, introduced myself, asked her name and inquired if she had help coming to assist or if she needed some. She looked me straight in the eye, smiled and said she had a guy coming over the next day for 2 hours and she and the boys were getting things together. I stepped into the garage and looked around telling her it certainly looked like she had things under control – and then I laughed. I asked her if Mr. Picky Eater and I could help her organize the garage so she would be ready for her friend to come the next day – she agreed, seeming a bit relieved.

Being the social worker I am, as we worked I asked her all kinds of questions! She was a cheerleader at OU during the early 90’s. She met and married her husband, who had just returned with a full-scholarship degree from Cornell, he was a businessman and had run for State Representative. At 34 he was killed in a car accident leaving her and 4 children under the age of 10. She (and her children) were kind and gentle people who, it turns out in the end, were most gracious and grateful that they met us during the last 2 days they lived in our cul-de-sac. I began to get a feel for where this woman was at in her life and I had great empathy for her. I WANTED to help her move. During the 3 hours we were there, we barely made a dent in the garage. She said she was going to have to leave the three pieces of furniture in the garage because there was no room in the smaller house they were moving to and she couldn’t keep lugging it around. Here are pictures of those two pieces of gorgeous furniture. 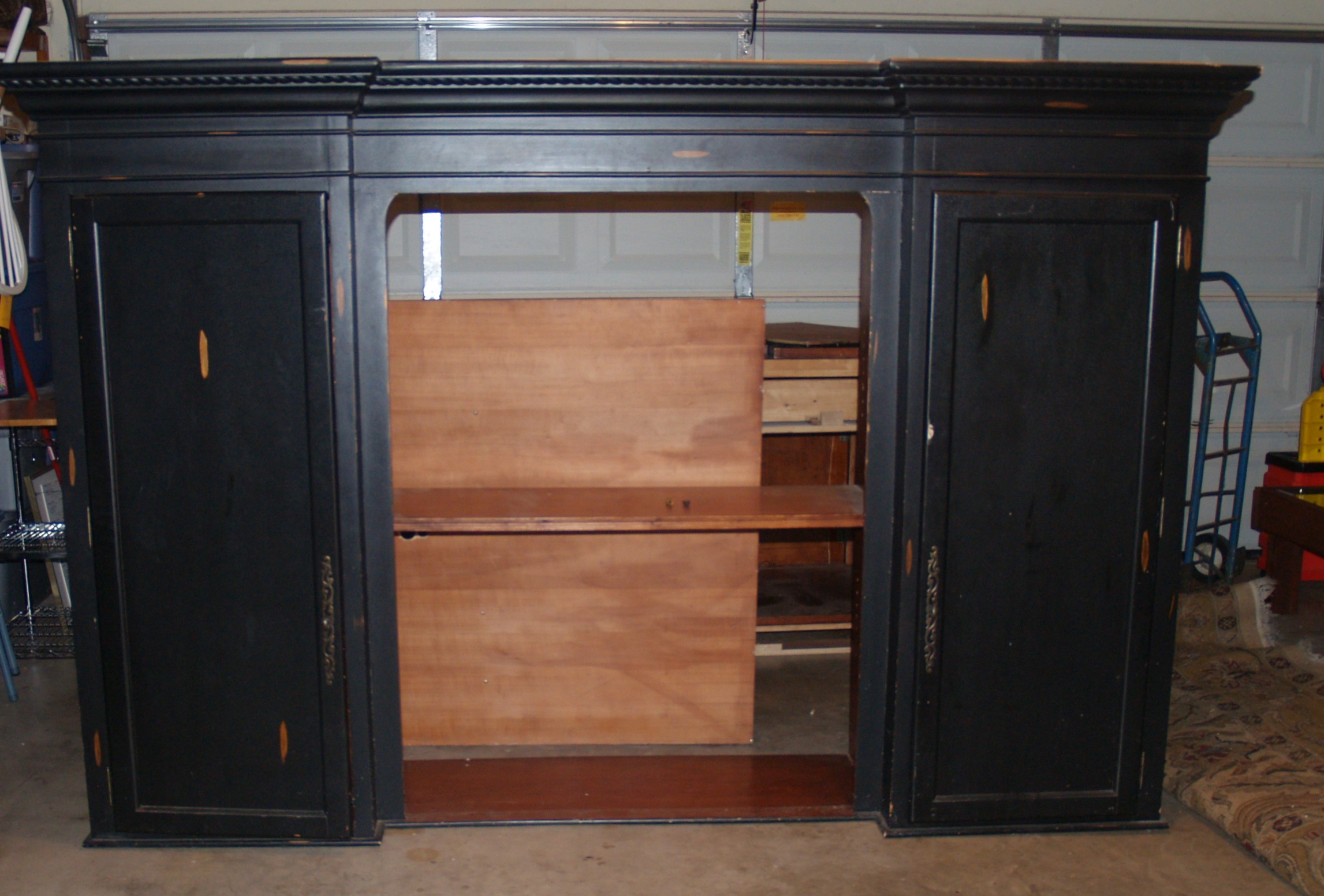 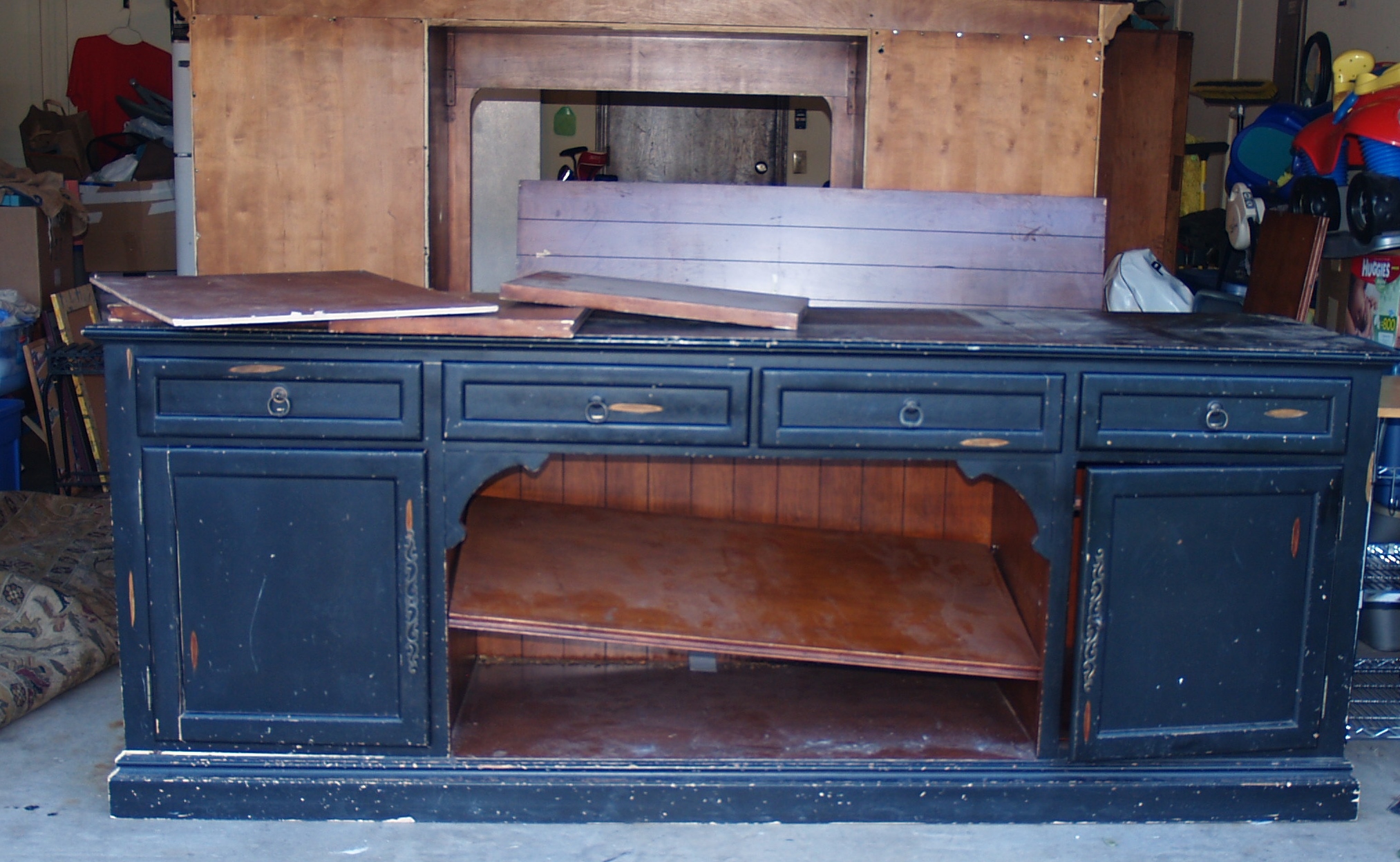 She asked us to take them. They are actually 1 piece that is nearly 10 ft. tall and 8 and ½ feet long! It won’t fit in our house with the top sitting on the bottom. Each weighs between 400 and 500 pounds and it took Mr. Picky Eater and Son-in-Law every bit of strength they could muster to get it across the street and into our garage. She also gave us a beautiful wood queen sized sleigh bed that will go into our guest room during the traditional holiday furniture moving. 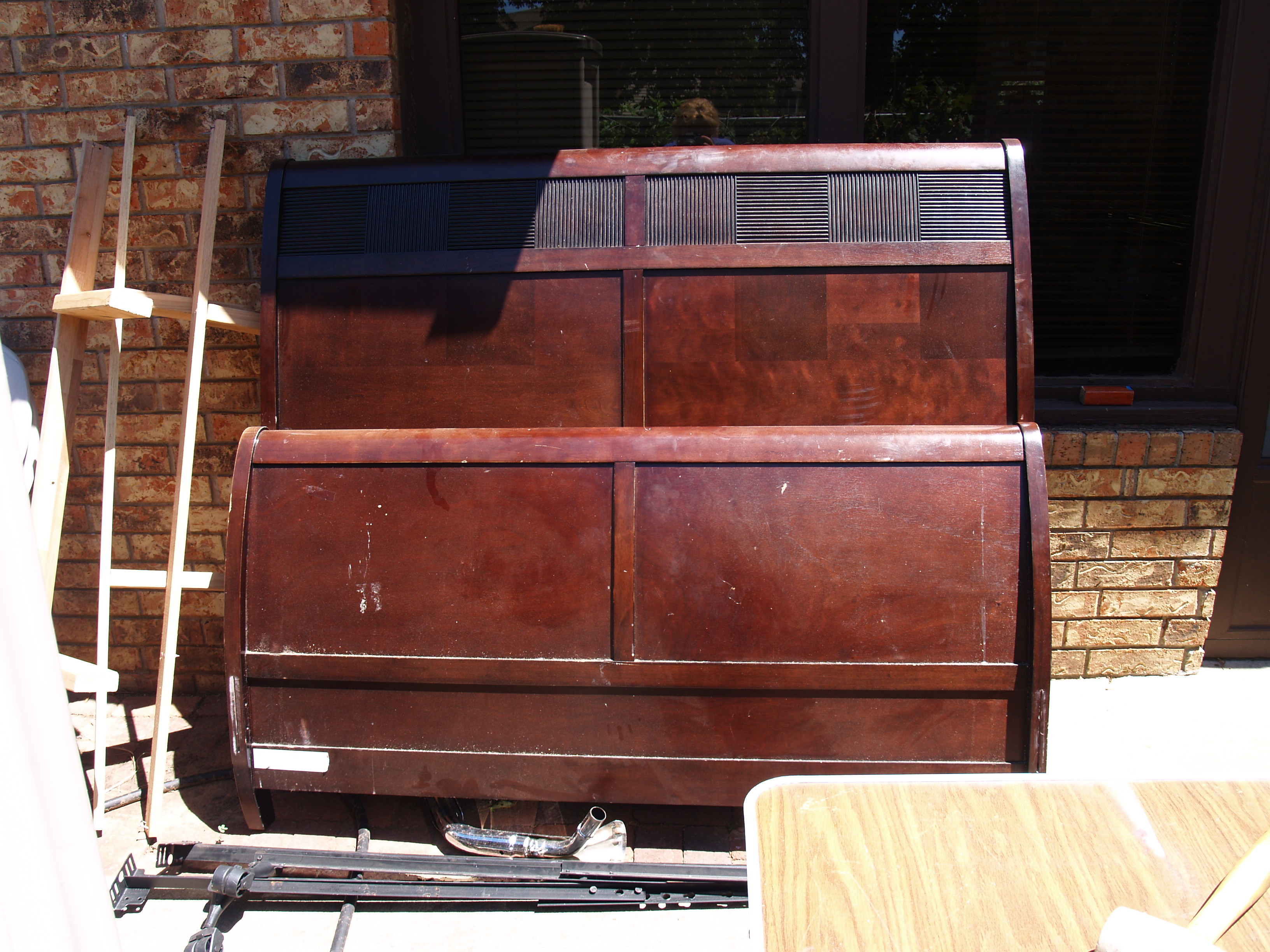 Guess what? The friend didn’t show the next day so MPE lined out the teenagers moving a huge U Haul truckload over to the new place. She gave us these dining room chairs she said were all broken and her dining room table that she said wouldn’t fit into her new small dining room. Oddly, a leg was off each chair………..so we dug through the mess and found all the missing ones and MPE screwed them back into the chairs. They are leather and wood and the table is a huge conference desk from the 30’s. When they got to the house, MPE felt she was looking at things in an overwhelmed way because not only did the dining room table fit fine, the chairs did too and we took them back to her.

That brings us to Sunday when yet another “friend” did not show so MPE got the whip out forced those kids to work more moving the 200 pound headboard and 150 pound chest along with other various furniture/box/bags and moved that family to their new home! I spent the morning making these cupcakes for them. I think blondie and the kids needed a treat because I’m not sure the tribe had found their way yet since their leader had died. They acted like I had ground the flour that made the cupcakes – they really liked them and the red, white and blue theme really seemed to make them smile. Turns out they were a lovely family who needed some help and we were happy to – and we got some great furniture that MPE and I will make into fabulous smaller pieces for the show we are doing on July 20th. It’s called Ruffles and Rust 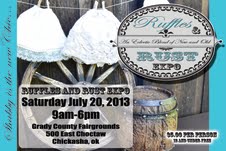 Although MPE cannot move well and merely waddles through the house today! 

This is what you do:

Make up a vanilla cake with a mix like this: 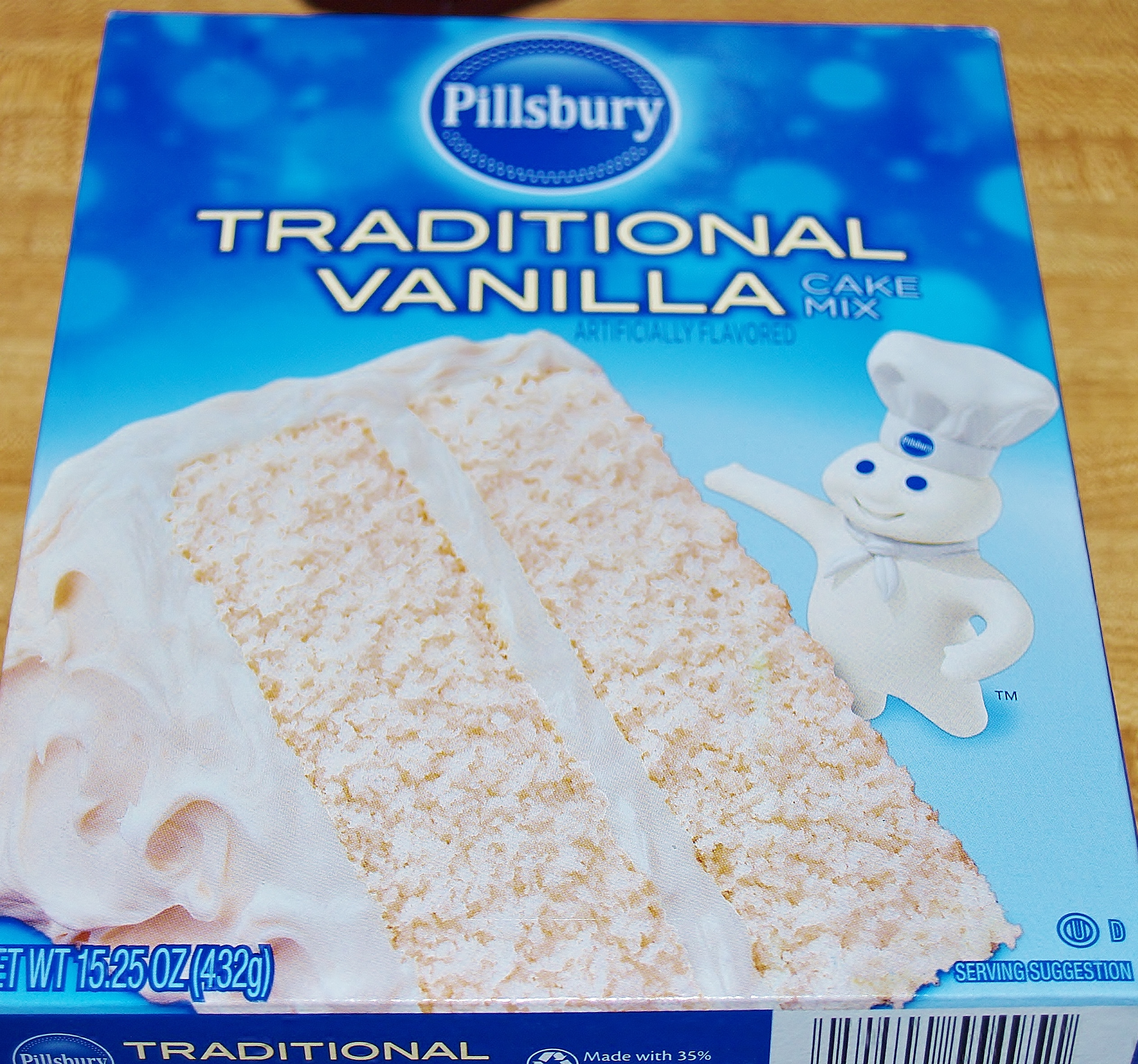 Or make up your favorite one from scratch.
Divide them into 1 ½ cup sections.
Add red food coloring to one and blue to the other, leaving one white. 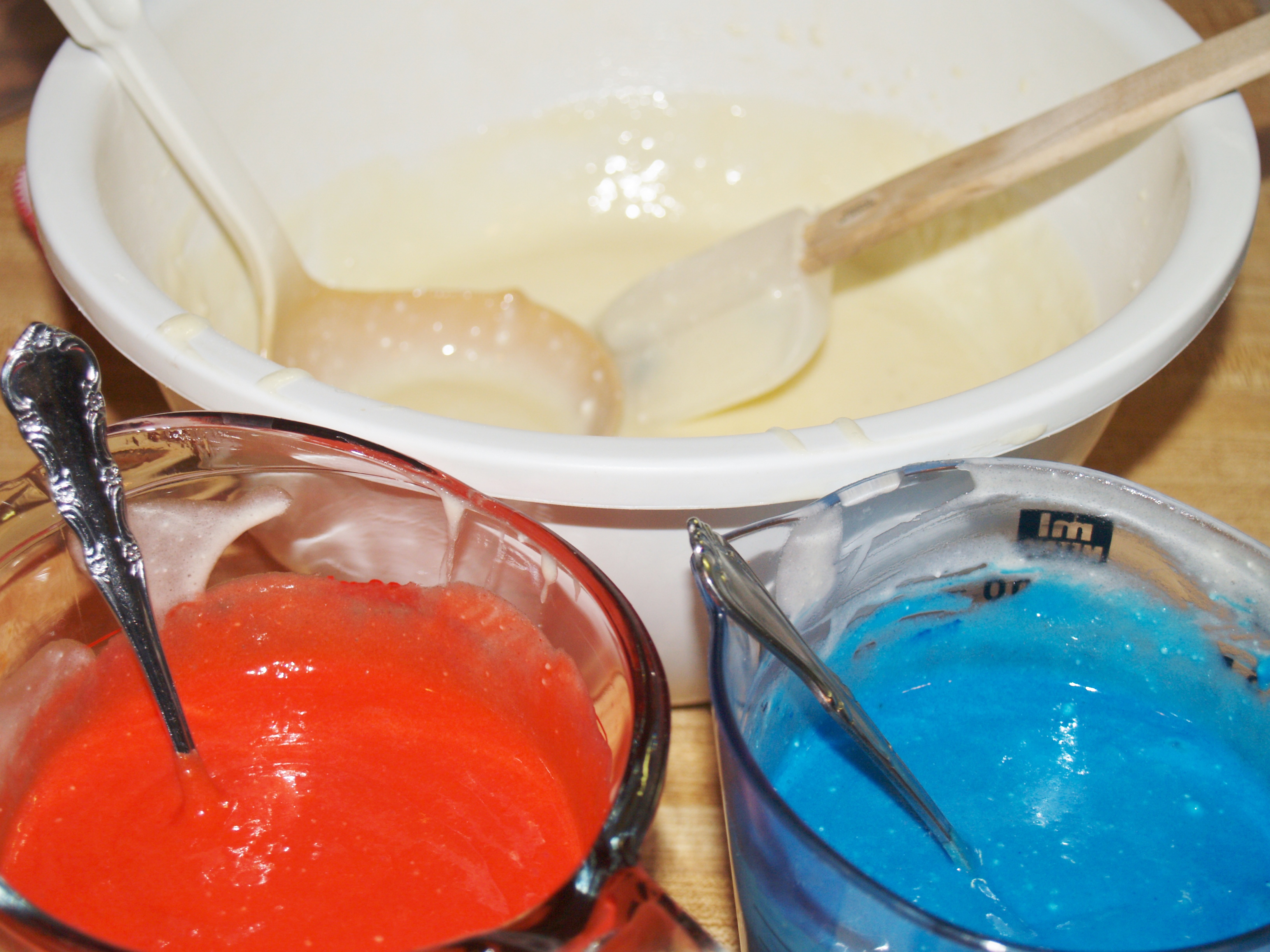 Layer it in however you want.
Bake according to box recipe. Then, letting them cool completely ice with canned or homemade and then decorate the top if you like with sugar like I did. By the way, I saw this recipe on Imperial Sugar’s site. 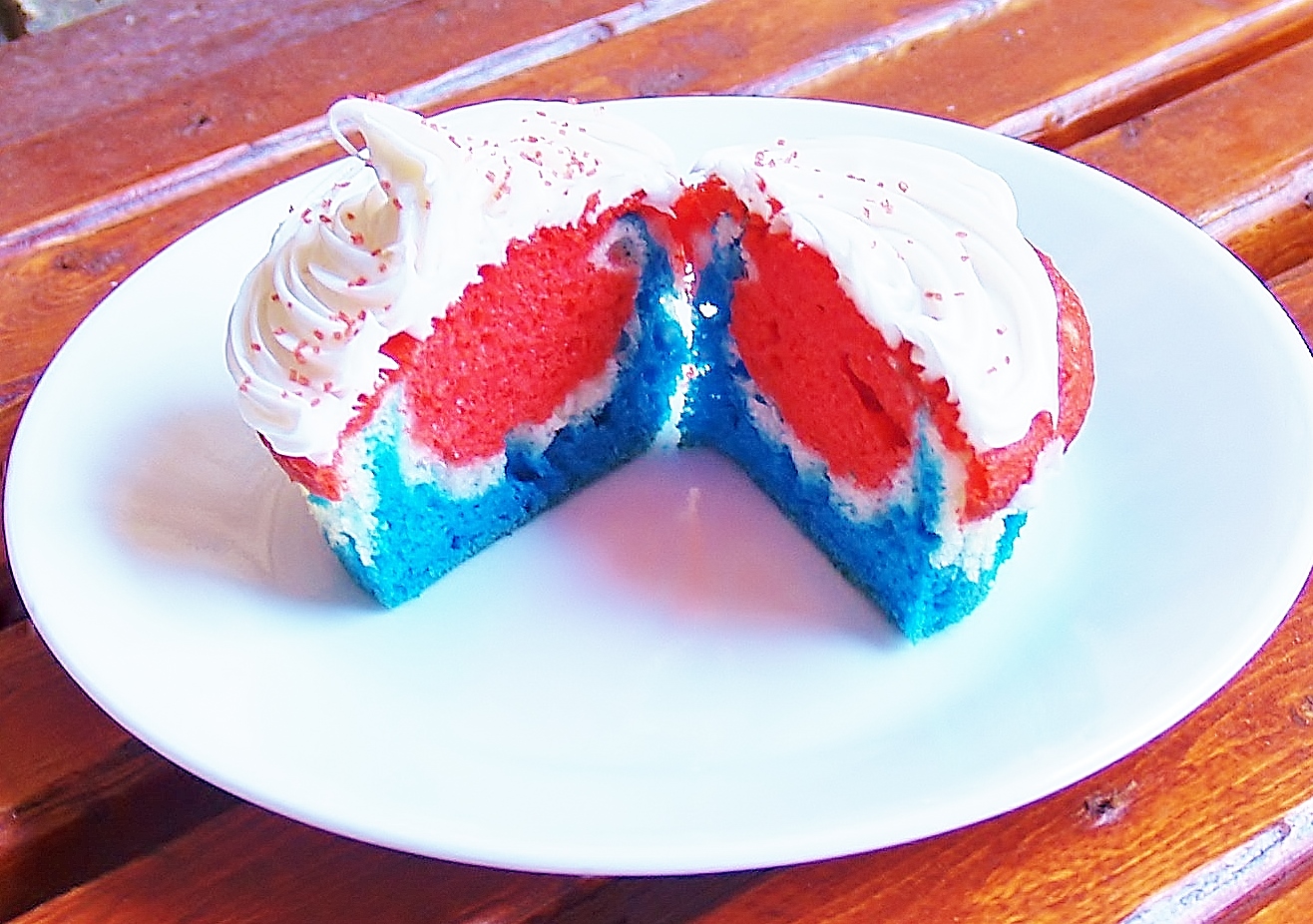 Happy 4th guys – I really appreciate all of you and I’ll talk to you soon! 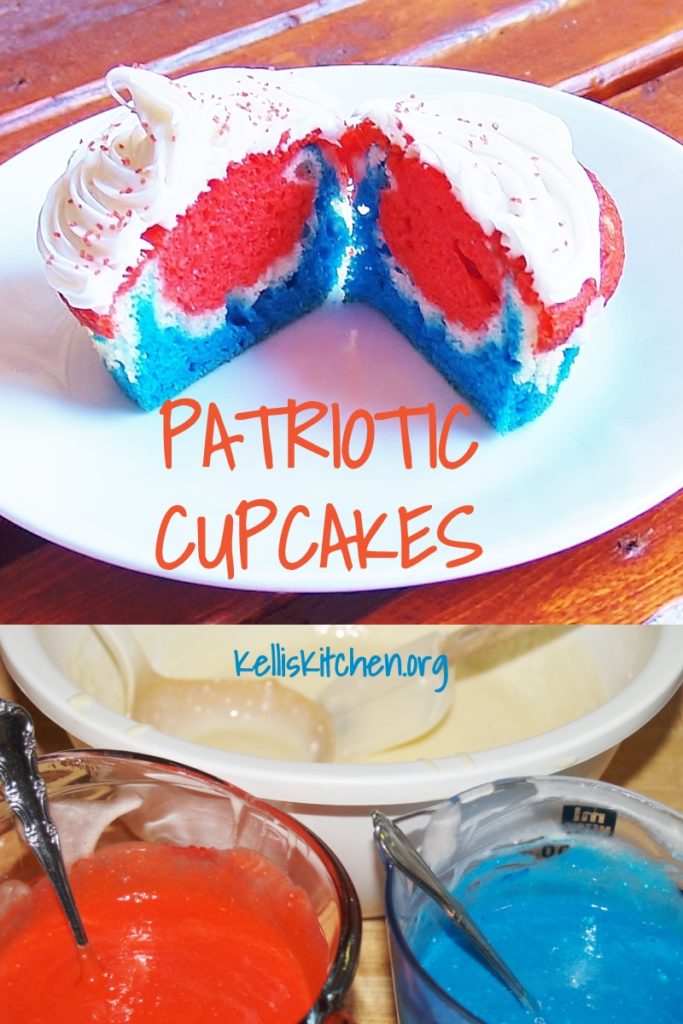