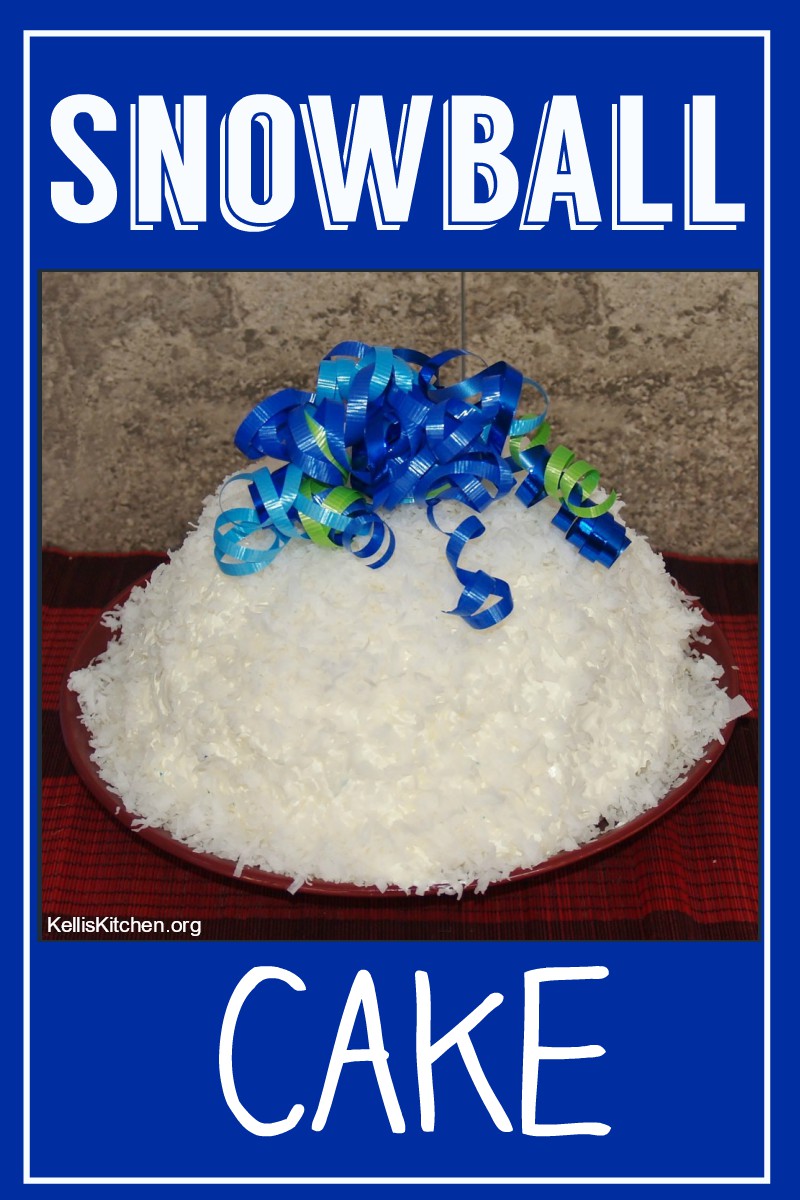 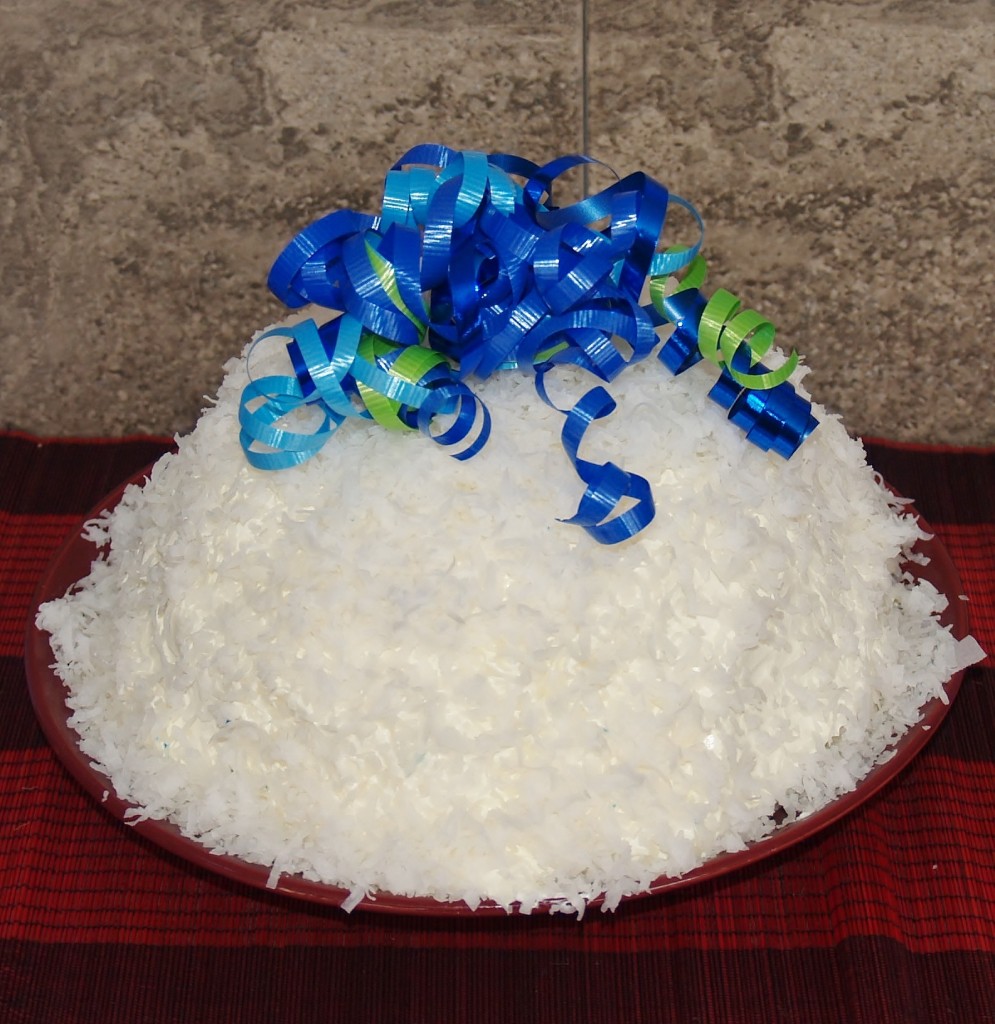 This is my version of the snowball cake found at Kraft Recipes.  It’s moist, delicious, and even though the outside is not a perfect replica of the hostess cake version, the outcome is still delicious!  You must keep it in the fridge but the cold cake is so much better than you could ever guess.

How are your holiday plans going?  Luckily, I have finished my shopping and even though not one of those gifts are wrapped, they are here and ready to go on Christmas eve when Mr. Picky Eater makes chicken fried steak, mashed potatoes and gravy with salad….mostly for my mom who loves it.  We have peppermint malts as we drive around looking at Christmas lights and singing carols that play on the radio.  When we get home, we sip on my mom’s famous homemade hot chocolate with big fat marshmallows stuffed in the top of the cup while we open presents.  Christmas eve is a time just for my mom.  Sometime between today and New Year’s we will have something with our kids but it’s always very non-traditional and laid back.  The kids like it that way and so do we.

So let’s see:  We got Rocket a new iPad because he has completely worn out his old one from last year that his other grandma got him.  Isn’t this a cute Christmas Card? 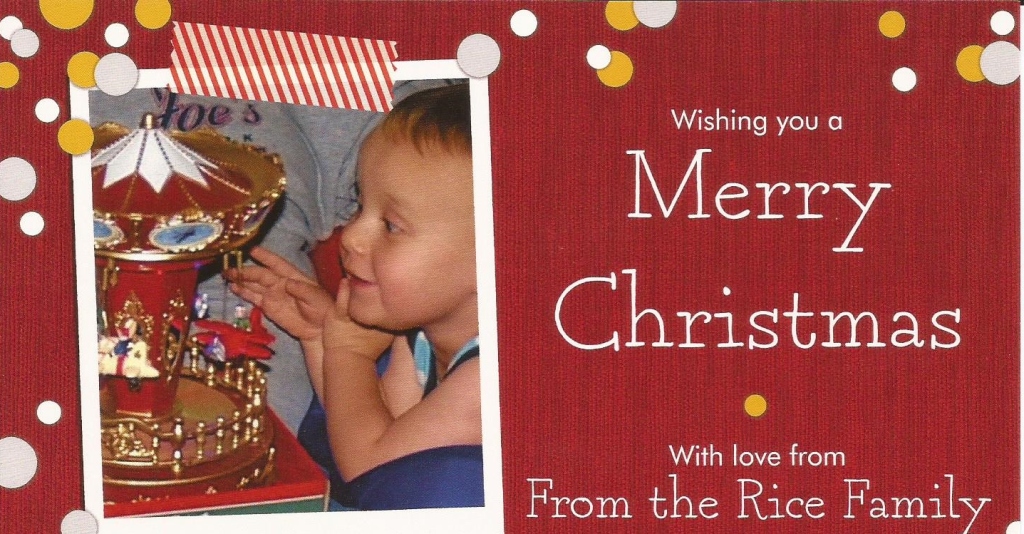 We got Son-In-Law a Star Wars Advent calendar that he got early so he and Rocket could go through Advent with it.  I’m not sure who is having more fun SIL or Rocket!

We got Top Girl (daughter) all kinds of fun stuff but I can’t tell you what it all is – because she reads my posts and then she would know!

Lawyer Boy and Wonder Boy got things their dad picked out for them.

Lawyer Boy’s wife, Minnie Mouse is getting this cow painting which she loves – and I love too!  I think she will be very surprised when she gets this! 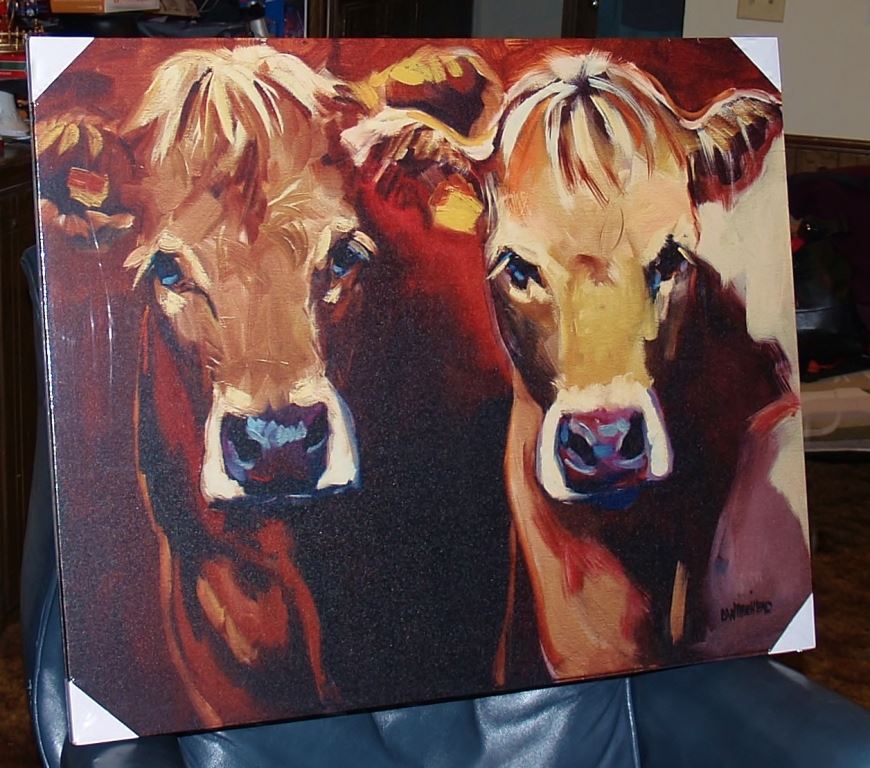 Mom got a new sewing machine because all her work for us over the years has worn it out – and its 20 years old anyway.

I spent a lot of time on Mr. Picky Eater’s gift.  Long before he became a Finance Man, he went to college to be a journalist and photographer.  The pay was terrible and with two growing boys, he decided to do something more profitable but while he was a print journalist and photographer – he was generally a sports writer – he wrote a national award winning article about some teenagers who were killed in a very small town in Western Oklahoma.  His photographs won awards as well for that particular 4 page article.  There’s one photo looking down a hill with mourner’s cars parked on both sides of the lane in the country cemetery and then, to the left you see four hearses parked perfectly aligned directly behind four awnings over caskets and family seating.  It’s a terribly lonely picture that pretty much tells the story of what happened.  I wish I could show you but the newspaper office burned down years ago  – the original photos along with it.  Now the only record I can find was the newspaper photo and that’s a story in itself!

I wanted it to be a surprise and since the boys never knew about their dad’s awards, they would not have been any help.  Oddly, I think the boys only know things about their dad as it pertains to them.  He’s not one to toot his own horn I guess.  Anyway, when I called the newspaper they were of no help except to say that the Oklahoma Historical Society holds Micro Fiche for every newspaper ever published for every day in the state.  So I could go make copies of that as long as I had the dates and enough quarters to sink a ship in order to pay for copies.  My friend Tana – who is from a very small town herself – suggested that I call the Funeral Home in the town and ask them the dates.  I laughed at her – saying there was no way the funeral home would remember 4 funerals from 30 years ago…….uh, I was wrong – and Tana was right.  They gave me the dates within 10 minutes of my first call to them.  Seriously, it was the son of the original owner who went to the file cabinet and found it pretty quickly I would say.

I spent a full day off work (I was working at the time) at the OK Historical Society looking up that and many other articles from every newspaper that MPE ever worked.  Then, I drove to said newspaper offices and took pictures – as well as his old high school and the fields where he bailed hay, picked tomatoes and watermelons when he was 14 years old.  The final pictures I took were of the radio stations where he worked as a DJ, both in his small town and at OU.  I looked through the other scant pictures of him that I could find, taken mostly when he was a child or the boys were children……….compiled them all and sent them along the interwebs to Shutterfly where they did their magic and made a huge “This Is Your Life” book.  The scanned photos of the newspaper articles are pretty small but being able to read every single word wasn’t the point anyway.  The book took months to complete and ended up costing far more than I thought but now he has a record of an award that he is very secretly proud of and no longer had tangible evidence of as well as his early life – the final picture is of him and Rocket with their backs to me walking down a road near the house he grew up in.  He’ll act like he’s upset that I made such a fuss but I am positive he will be thrilled that one day he can sit and show Rocket “what he used to do”.

The best part of Christmas is giving.

Okay, let’s get on with that cake. 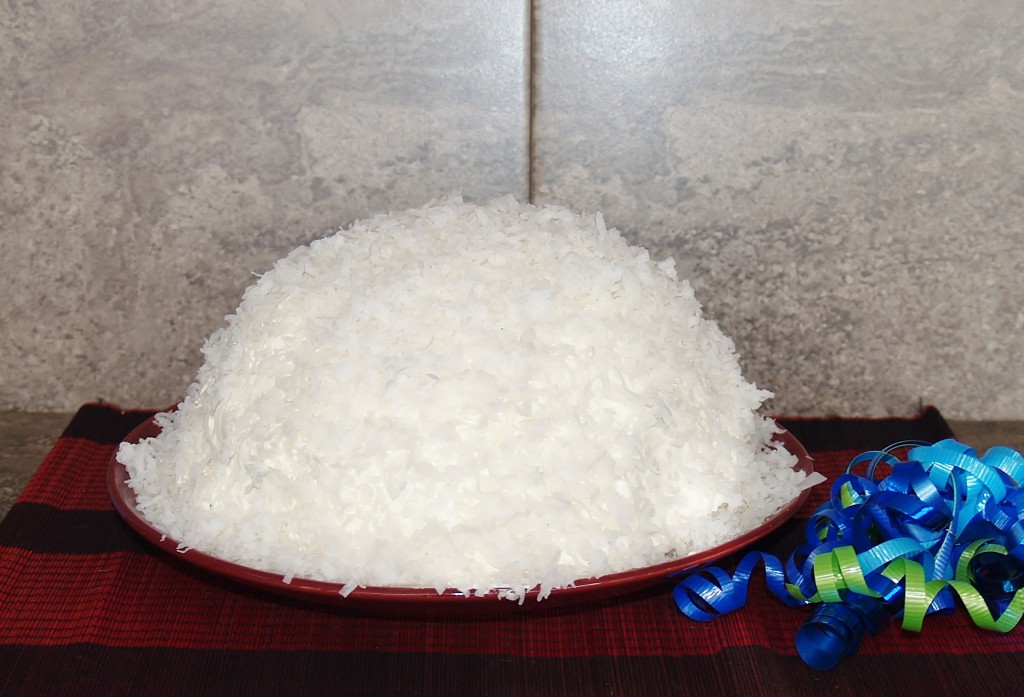 You will need an oven proof bowl (I used a metal but Pyrex is also good).  It will need to be able to hold all the cake batter without running over.

Mix up the cake according to directions.  Spray the bowl with non-stick spray. Pre heat oven to 350F.

In another small bowl, beat the cream cheese, egg, and granulated sugar.

Pour the cake batter into the sprayed bowl.

In the very middle of the cake batter, scrap in the cream cheese mixture.

Bake for 1 hour and 5 minutes or until a toothpick comes out clean.  Let the cake sit in the bowl for 10 minutes and then take a butter knife and loosen the sides, flip over the bowl and pop the cake out – letting it cool completely. 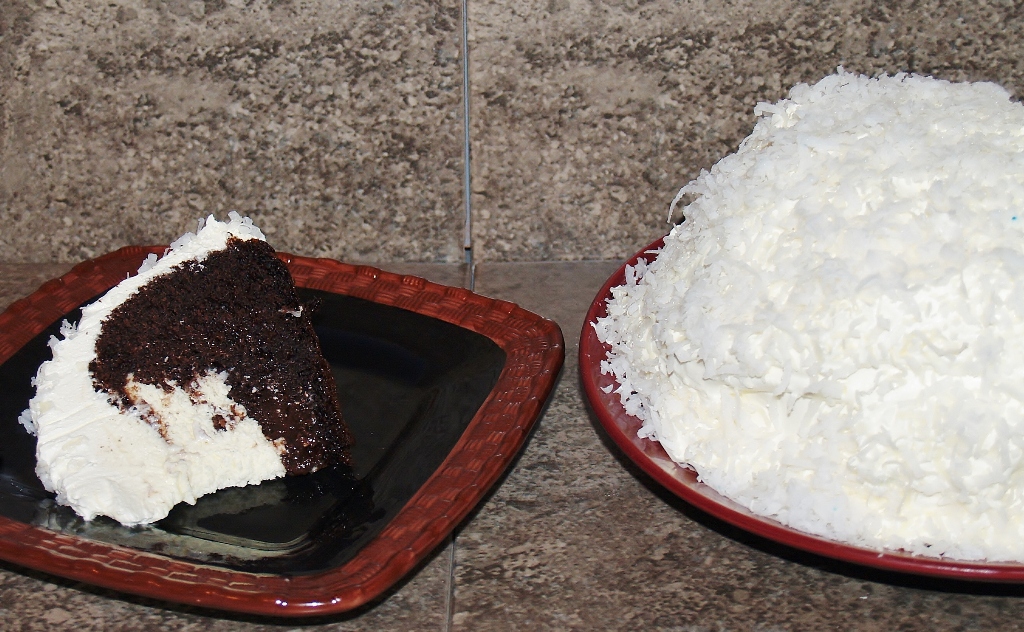 But don’t stop there!  Mix together the pudding mix, powdered sugar, and milk in the bowl whisking for about a minute.  Then fold in the non dairy whipped topping.  Cover the bowl and stick in the fridge until the cake is cooled completely.

I sat mine out in the garage where it was cool for about an hour.  Then I covered the cake with the topping in the fridge and finally sprinkled the coconut all around.

I stuck the ribbon on because I thought it was pretty.  Mom and her lady friends LOVED it on game night.  Luckily I got that one piece that I photographed or I would have gotten none at all.

I hope you will do this……….it’s a really pretty presentation and evokes great memories of childhood snack food! 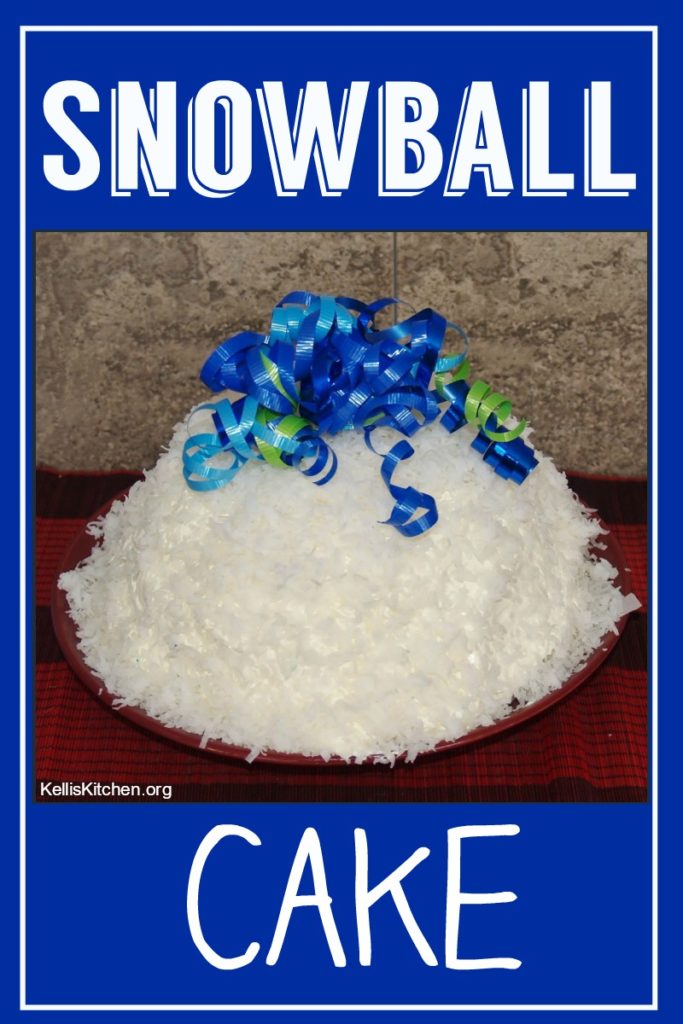