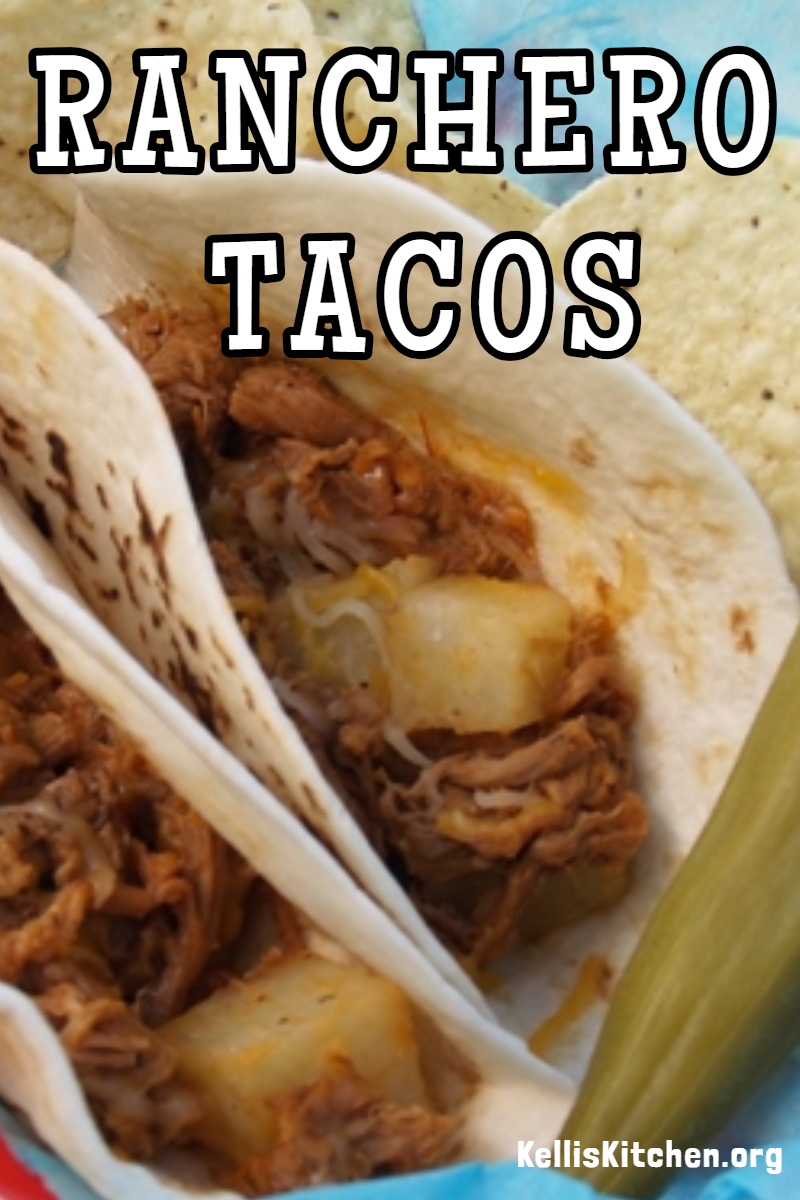 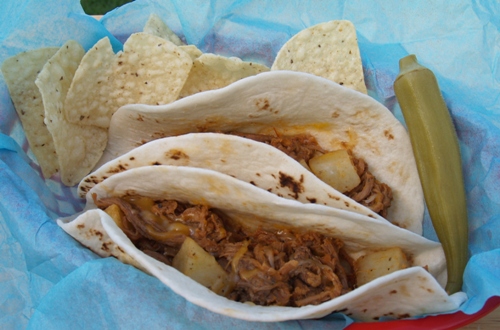 I think I have told you in the past about our non-traditional holiday celebrations but in case you missed it or weren’t reading last year, I will tell you a little about our Thanksgivings here at our house. As you may have surmised, we have a blended family. Mr. Picky Eater and I married 8 years ago joining my daughter and me with MPE and his two sons. Since that time we have added a son-in-law, daughter-in-law, two dogs and the light of our life, our grandest son Rocket!

When I was growing up, we had very specific places we went on each holiday and when I was very young, there was fun and anticipation for me like the big party at my Aunt and Uncle’s where all the “orphaned” people would come because they had nowhere else to go. Here are a couple of pictures of different years spent with Aunt Irene and Uncle Ray. 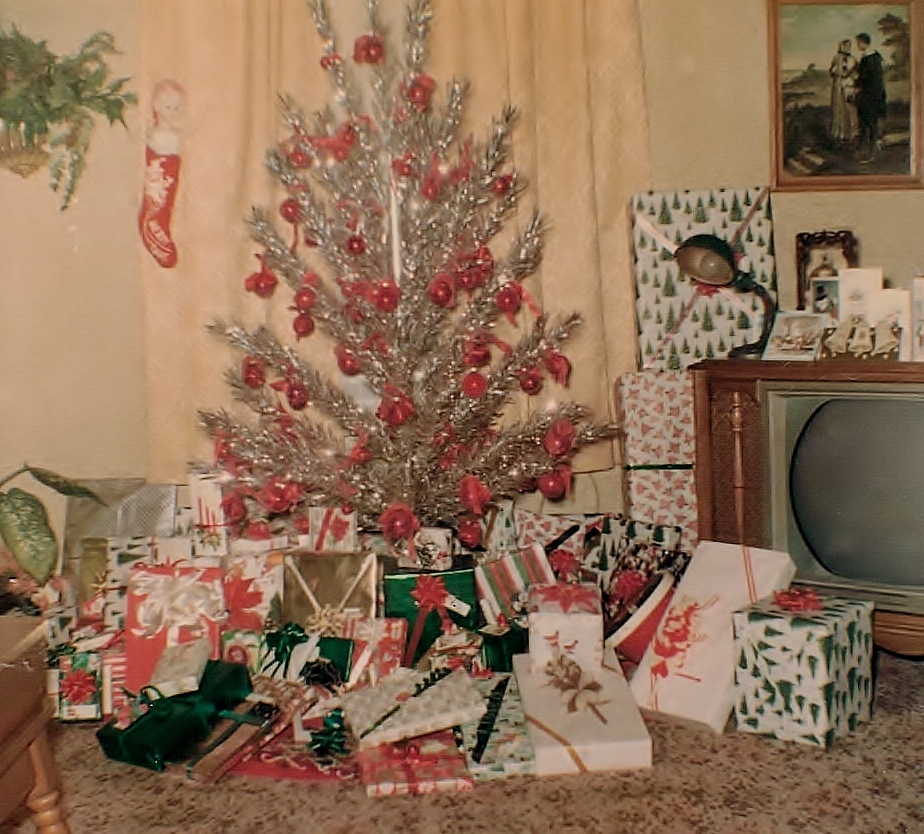 This is the Christmas Tree that Greeted us every year. 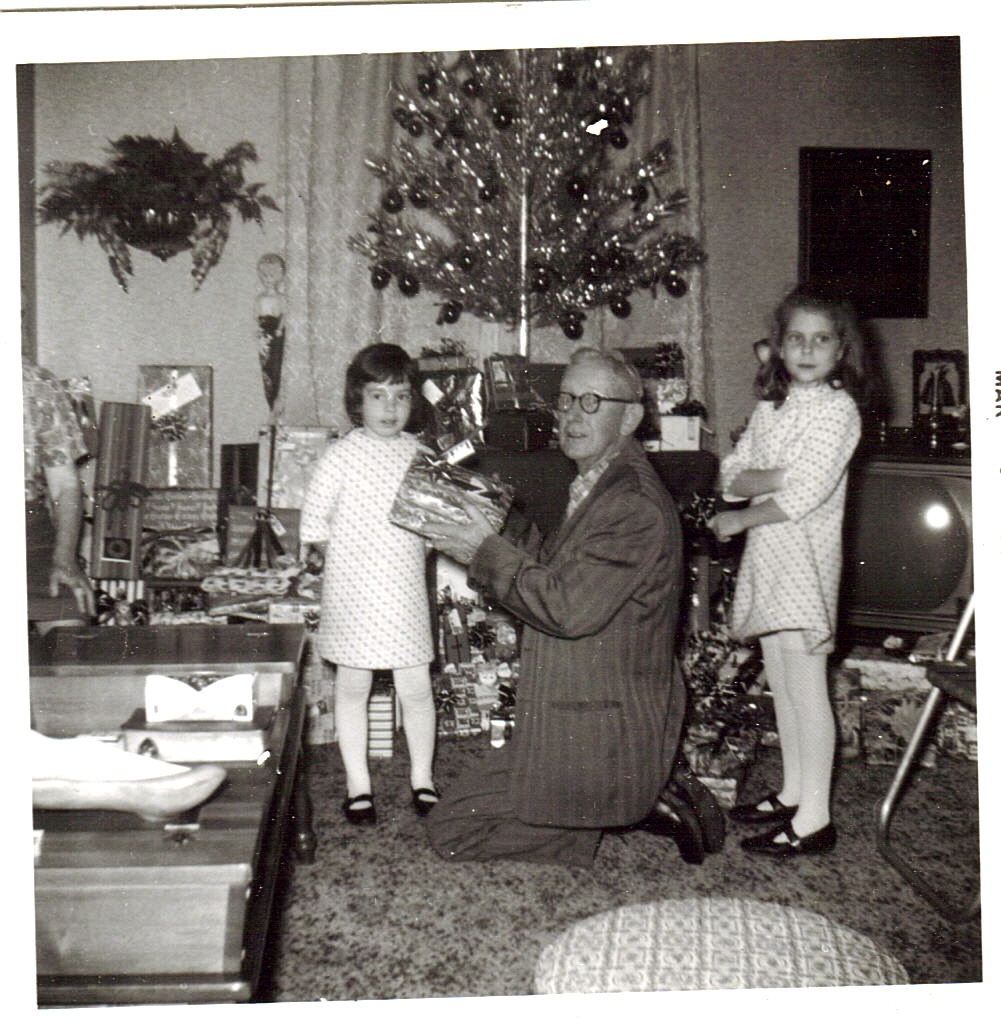 I am on the left and my cousin Dana is on the right. Mr. Bowen – one of the orphaned people is in the middle. 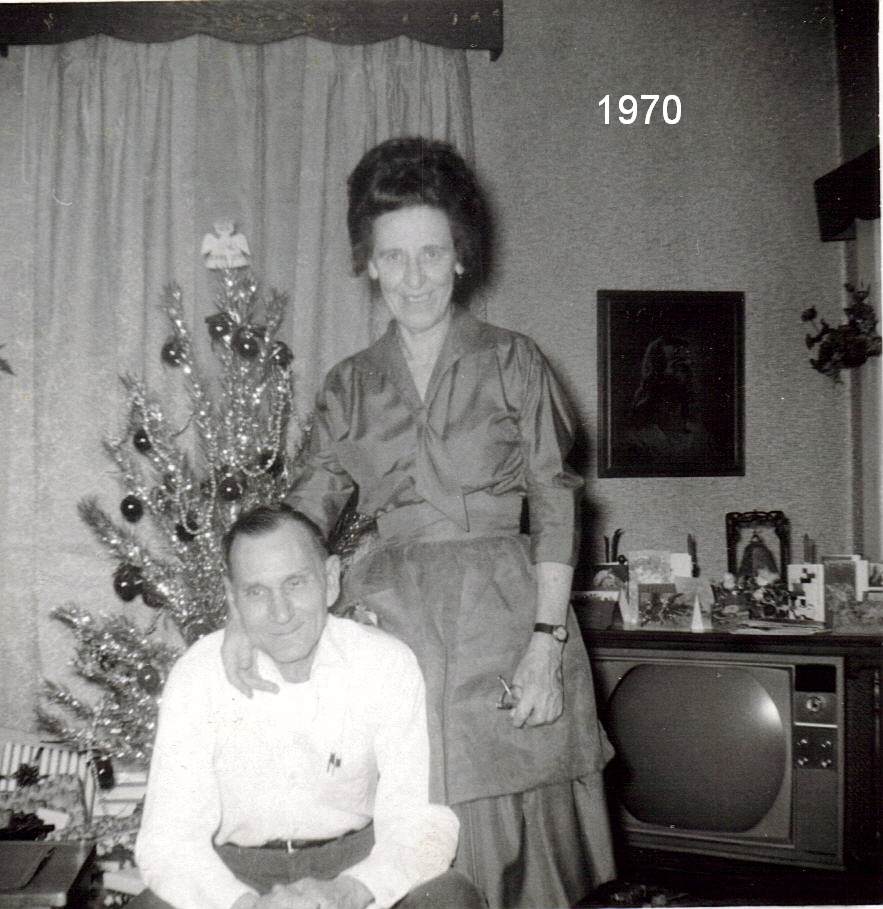 This is my Aunt Irene and Uncle Ray – they introduced my parents. 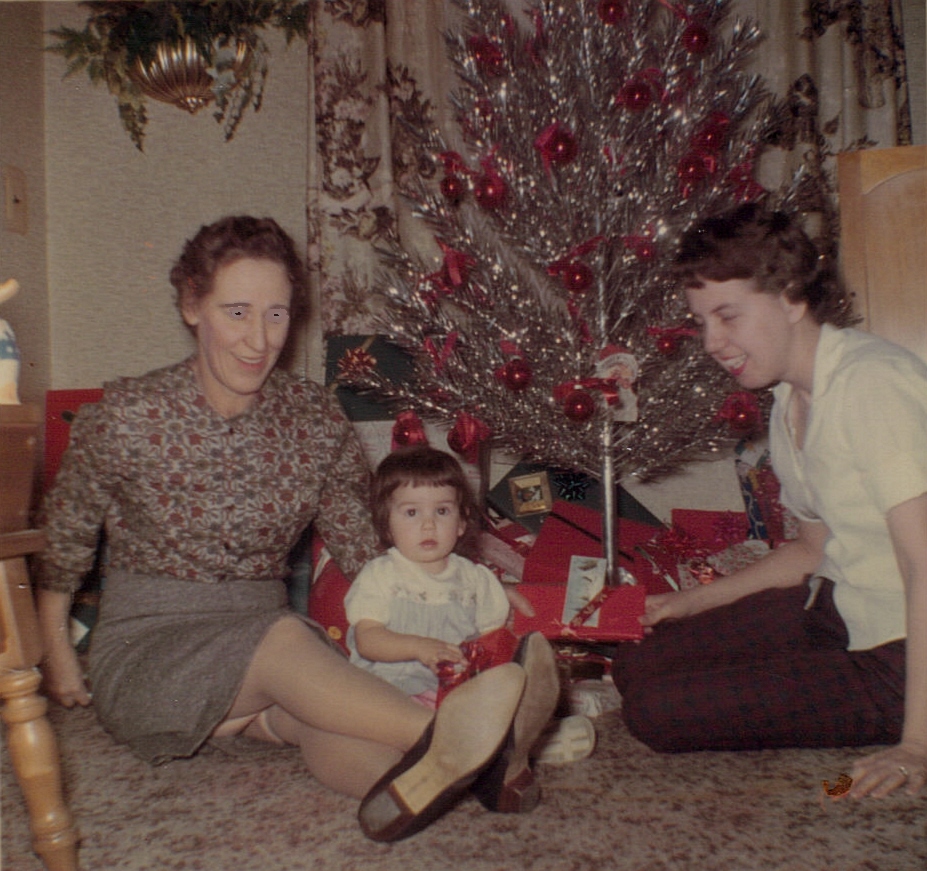 That is Aunt Irene on the left, me in the middle and Mother Kalamity on the right. 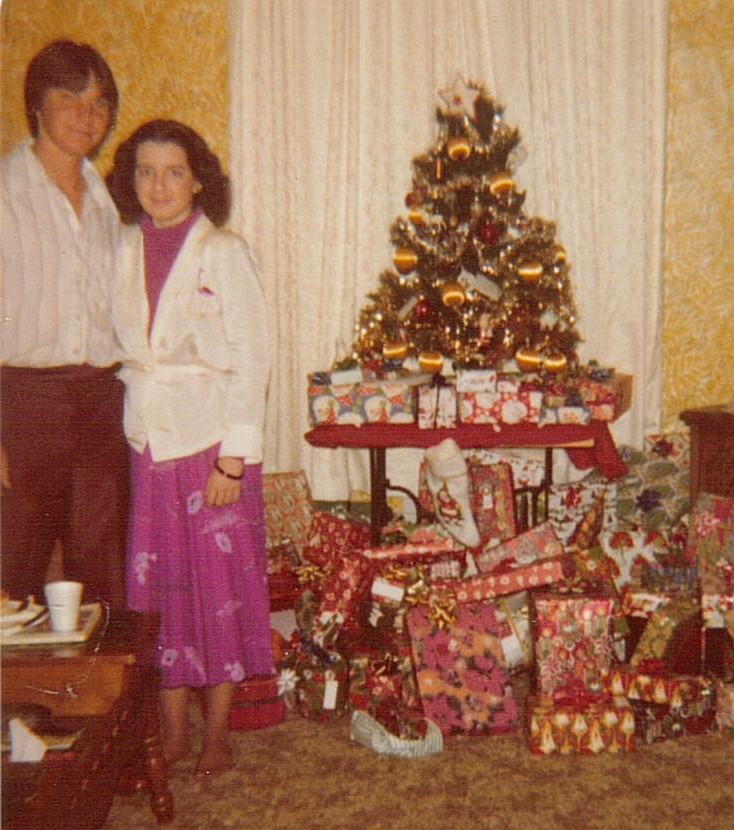 But after my daughter was three, her parents weren’t married anymore which meant she had to split her holidays. You can only convince them for so long that it’s like TWO holidays at once. Then they figure it out and then it becomes a drudgery for everyone. Even though our kids were pretty much grown, I knew that our daughter had at least two places to go and it seemed the boys had three plus grandparents. I knew they would all be worn out just trying to make it to all those places and eat the same things at each place and not pass out from exhaustion! I really didn’t want to be just one more stop they HAD to make so, the first year we were married the night before Thanksgiving Top Girl and I went out to a Chinese Restaurant. MPE and the boys went to El Chico – a Tex-Mex chain started in Texas and making its way to Oklahoma a long time ago.

That worked out like a charm because we had our mothers over the next day for a traditional meal, we didn’t wait on any of the kids to show up – although they each did – and everyone had a very relaxing holiday. The next year and nearly every single Thanksgiving Eve after, we all go to El Chico for our traditional Mexican dinner and we have grown over the years. What started out as five is now eight! We still have traditional ham and dressing on the day with my mom (MPE’s mom has passed now) but our favorite and most fun is our “Mexican” turkey!

Last week I got an email from El Chico that invited me to enter a contest to create a taco and the winner would receive a $250 gift card to El Chico and it might even be offered on the menu sometime soon! That’s about what we spend each Thanksgiving Eve so you know what I was thinking, yep – let’s make up a new taco recipe! As I was thinking about it I received a forward from Top Girl. She had received the same email and she wanted me to come up with something so we would have the gift card for Thanksgiving Eve. She’s my girl!

In the end, I came up with Ranchero Tacos – and I also made burritos with them the next night. I hope you like it and I hope El Chico does as well so we can win!

Put it all in a sauce pan and let it simmer for about 20 minutes. 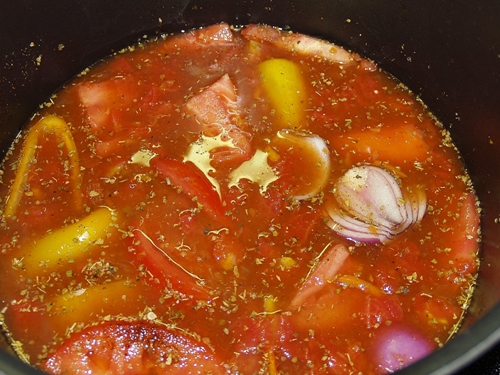 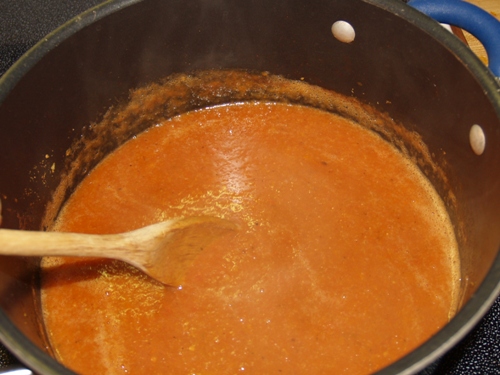 After it is all blended up, unwrap your beef – I used roast – and put it in the pot.

Place the lid on top and put in a pre-heated 325 F degree oven for about 3 ½ hours or until you can shred the beef.

Shred the beef and put back into ranchero sauce. 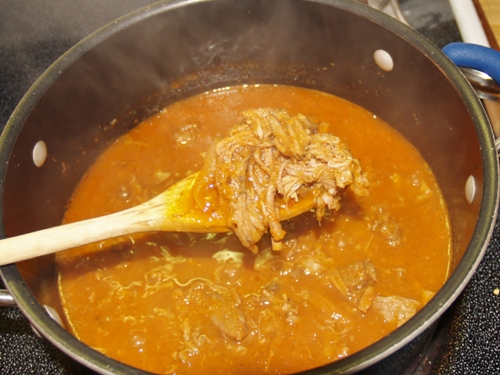 Peel and cube potatoes then sauté’ in a little oil until crispy on outside and tender on the inside. 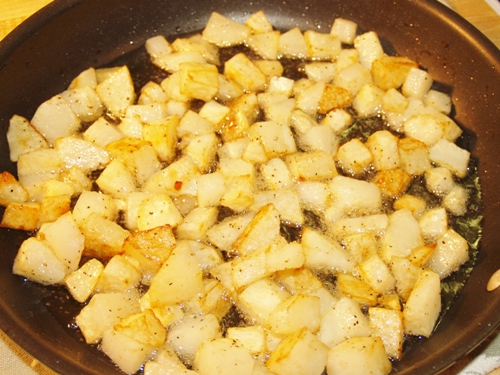 Drain potatoes on paper towels then add to the shredded beef and ranchero sauce.

Put back in the oven for about 30 minutes or until thoroughly heated.

Using tongs, place serving of meat, sauce, and potatoes in tortilla and top with a little shredded cheese.

Serve with pickles onions, carrots and jalapenos and/or salsa.

The next night, I took the Ranchero meat and potatoes out of the fridge – placed a little in the middle of a tortilla, 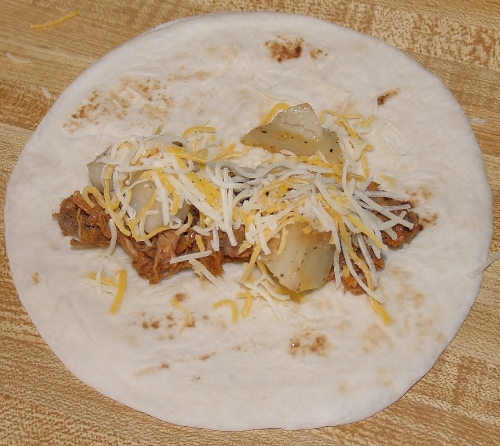 rolled it up burrito style and wrap tight in foil. 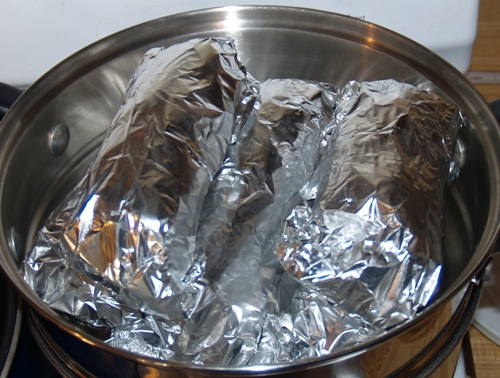 Steam for about 40 minutes in a stove top steamer and serve with Queso on top. YUM!! 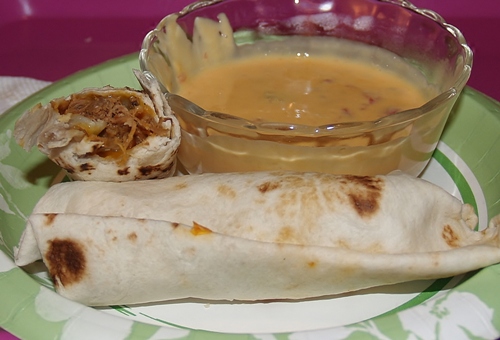 One last note: My second post is up over at Oklahoma Women Bloggers site. This one is entitled Aunt Pat. She was very special to me – I hope you enjoy it! 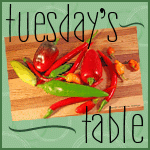 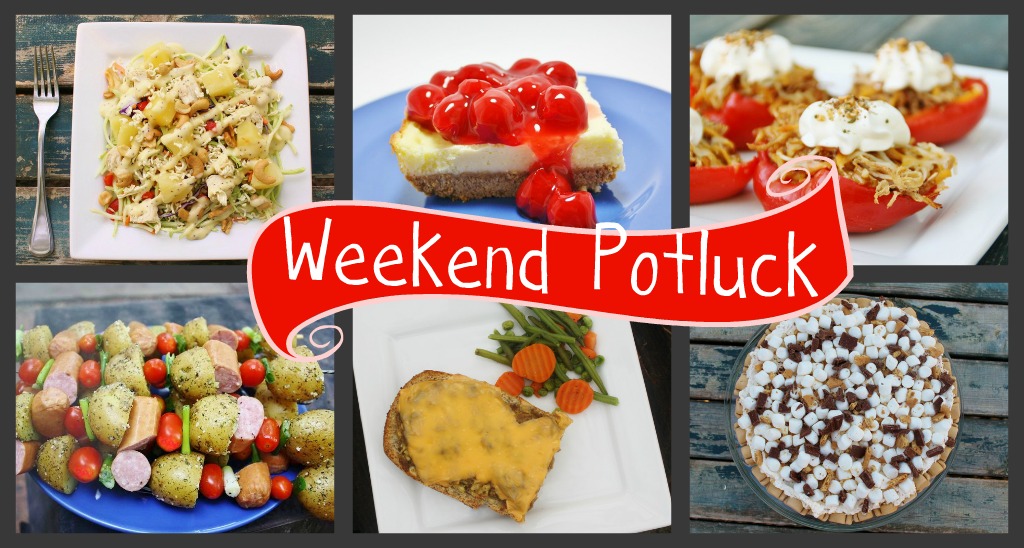