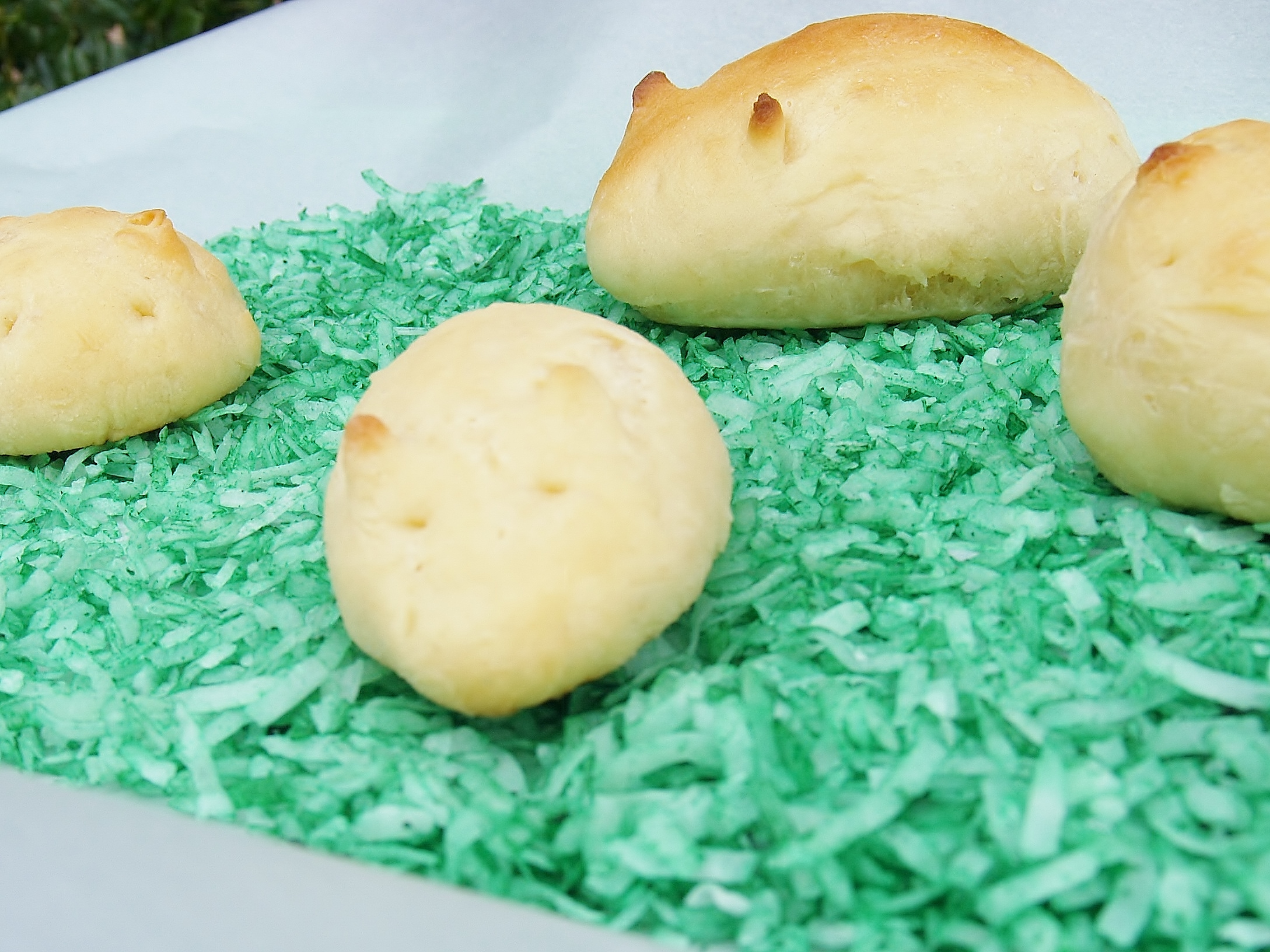 I’m a little ticked off right now – a few weeks ago, I saw a picture of the cutest bunny rolls on Facebook with a link to the “original” post. I went to the blog and saw the pictures, quickly read the recipe and determined since I could make them I would pin it and do it closer to Easter. Today was the day. I went back to the original recipe. After reading it well, I realized there MIGHT be something a little fishy but maybe not so I kept going. Now, I knew the way she was describing the process it was not going to work but I thought that since I know very little about making bread I could have been wrong. I made it exactly as listed – I threw out the mess. Then, I went back and prepped the yeast the way I had done it in the past and it worked. While the dough was rising, I read the comments on the post. There were two who had actually used the recipe (having to start over like me) and made the bunnies. One posted that it looked more like a gremlin than a bunny and the response was very vague – and absolutely NO instructions on how it could have been done better. Then, someone asked if something besides sour cream could be used. When the blogger answered, I felt pretty convinced she had never made these rolls. Then I read the very fine print at the bottom of the post that said the pictures came from a particular blog and then even smaller it stated that the blogger had been compensated for posting it and may or may not have actually made it etc…

I clicked on the link to what I thought was the original blog. After translating to English I saw that her bunny rolls actually looked WAY more like mine than the ones credited to her in the first blog. But the recipe was the kicker! It was the same three paragraphs over and over in a different order….at least that’s how it came out in English. I looked at every single picture on her blog and there was no picture like the one I pinned. I went to her FB page. Right there, just a few days ago a woman asked where the picture went because she couldn’t find it on her blog. The FB woman gave her viewer several links to other posts on her blog that were Easter related, but no bunny rolls. BTW, this FB page had over 12,000 fans. Then, I Googled it. I WENT TO SEVEN BLOGS THAT HAD POSTED THAT PICTURE BUT ATTRIBUTED TO ANOTHER BLOG. It has been pinned tens of thousands of times.

Finally……yes, finally I went to another blog that was in yet another language but the picture had been removed in 2012. I never found another clue. So, I don’t know if the original picture is actually real or photo-shopped or just a figment of my imagination. At any rate, I’m not posting it here and I’ve removed it from my Pinterest board as well – and replaced it with my own. Mostly because the rolls, the way I made them, rock! If you have ever been to a Santa Fe Steak House, then you know what these rolls taste like. One of my FB friends told me they looked more like frogs than bunnies so I’m calling mine: Froggie Rolls!

1. Put the butter & the sour cream in a small saucepan and heat thoroughly until warm, but do not allow boiling. Cool.
2. Put warm water, yeast, and sugar into a bowl and allow to bloom – about 5 minutes.
3. Mix dry ingredients into big glass bowl.
4. Combine all ingredients, including beaten egg, and mix well.
5. Turn out onto lightly floured surface.
6. Knead until all ingredients are combined. If dough is too thick to knead, add small amounts of water until the dough is pliable but not sticky.
7. Cover and allow the dough to rise until double in size. Divide into 16 equal parts (for rolls) or 24 equal parts and shape into oval balls for bunnies. 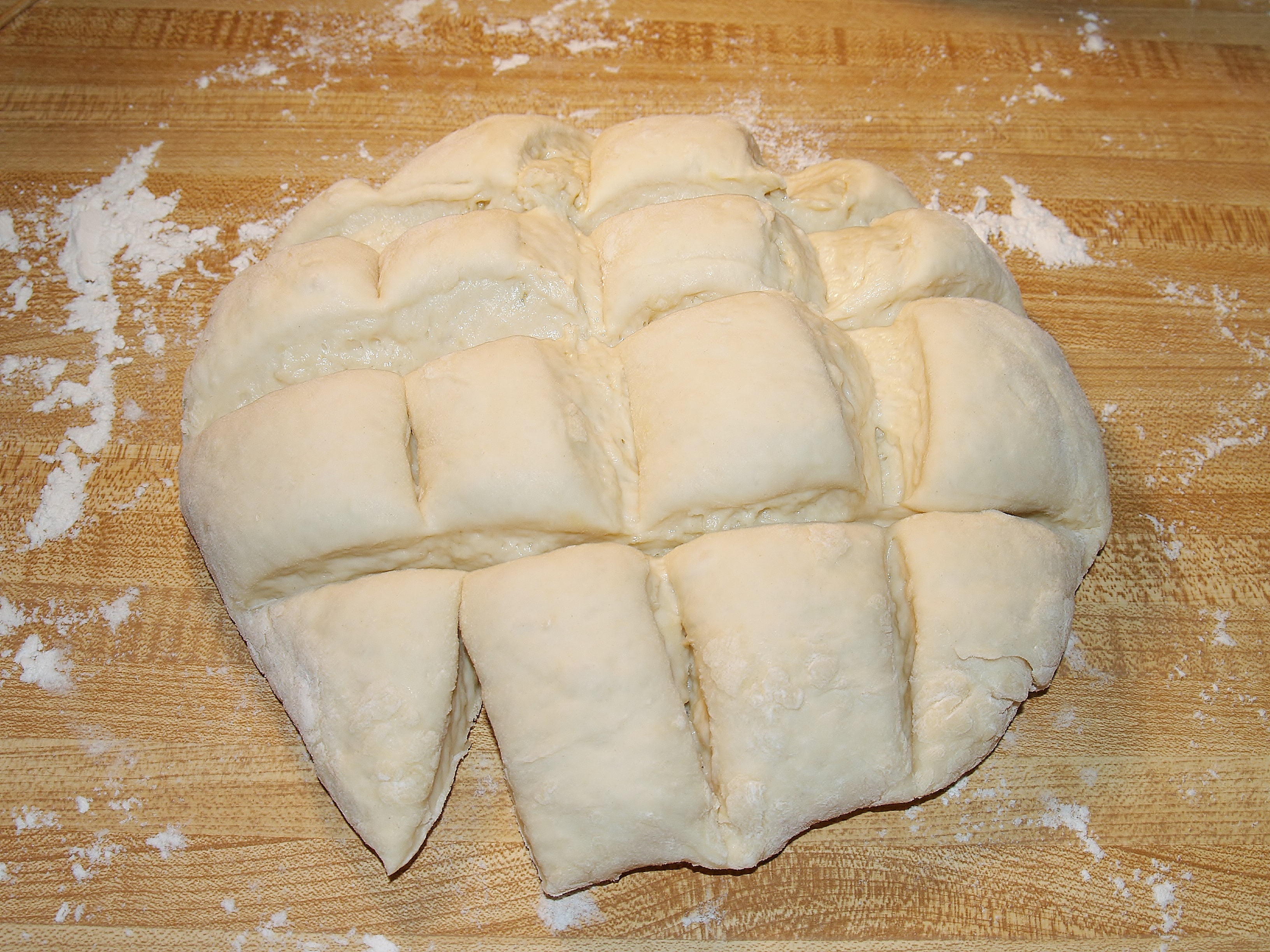 8. Place balls onto a baking tray lined with parchment paper.
9. Cut the “bunny” ears with scissor and then poke a skewer into roll where eyes would be (or not). 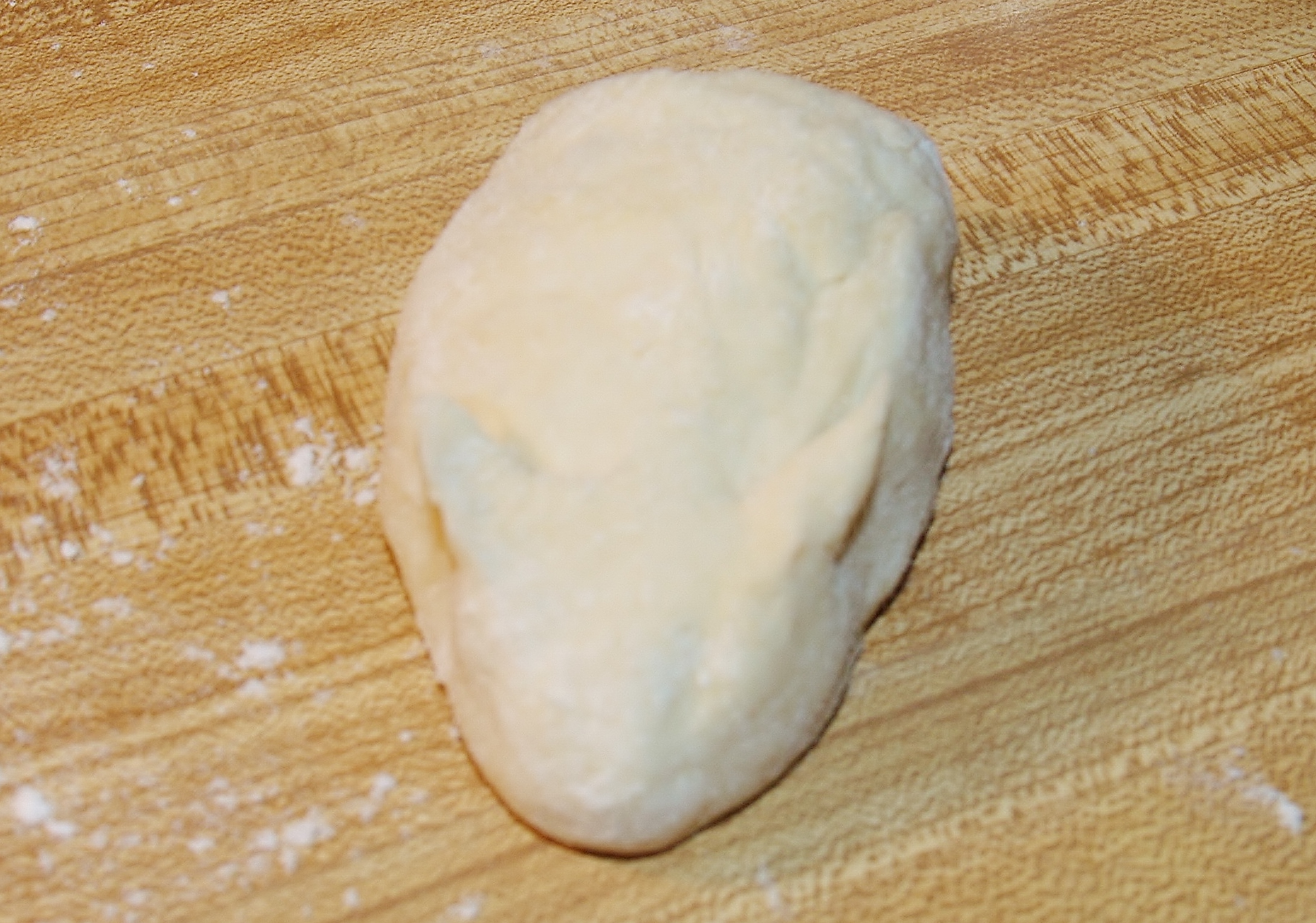 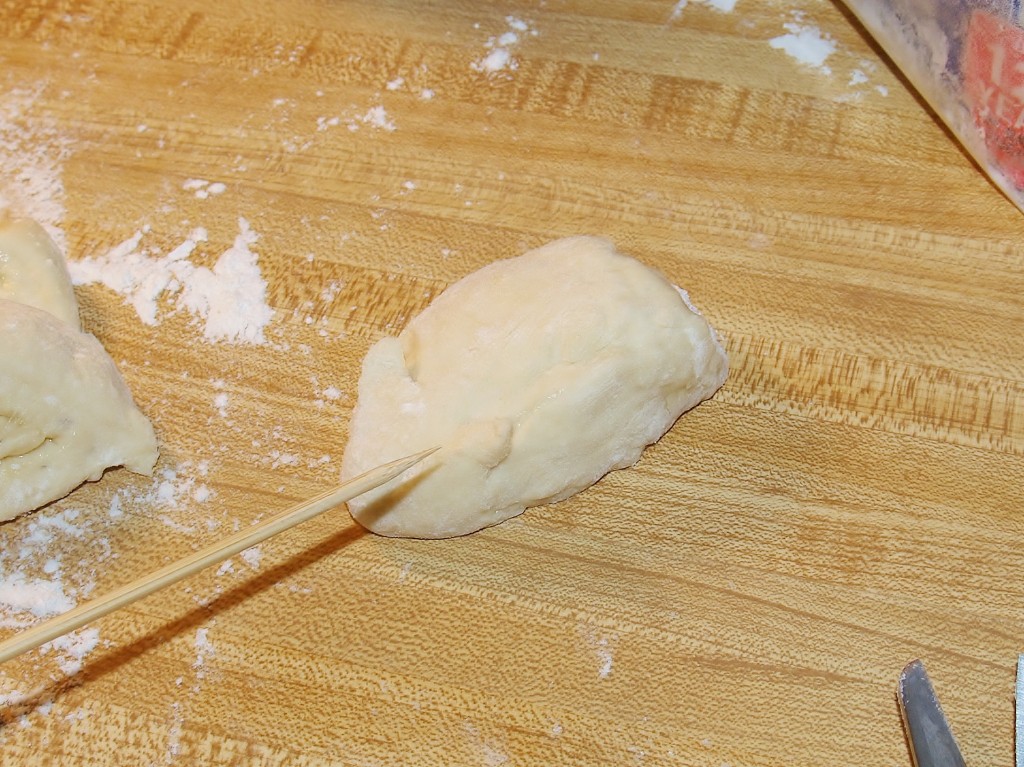 10. Bake at 375° for about 20 minutes or until golden brown.
11. You can either make these bunny rolls or you can just make regular rolls. 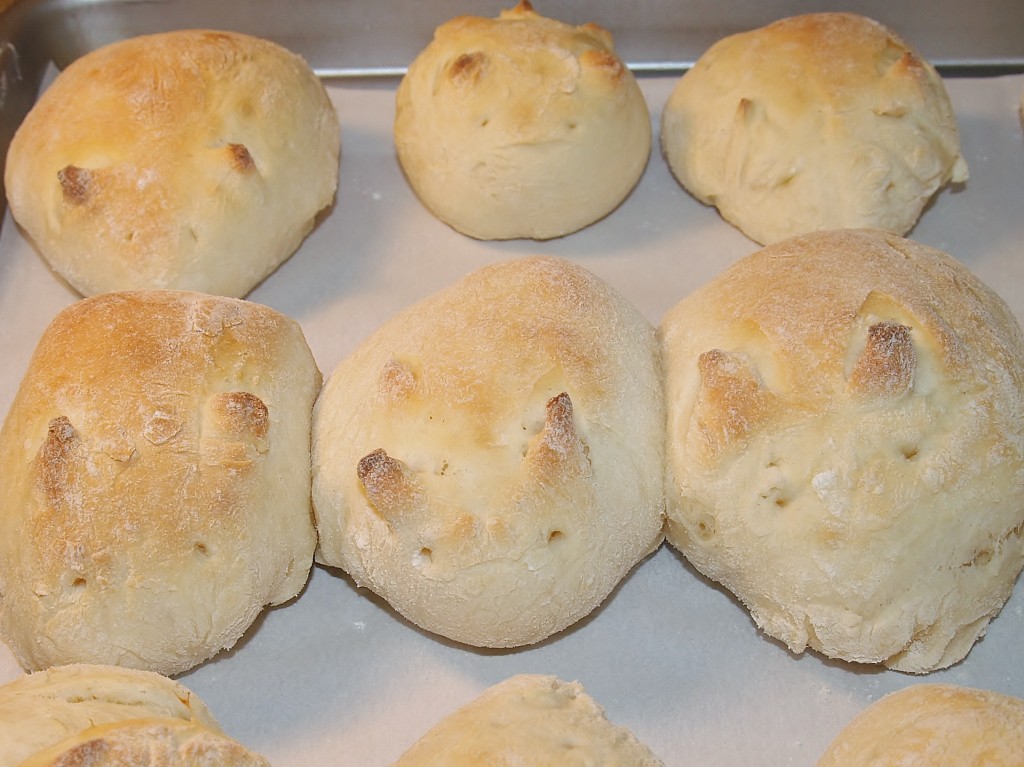 They are so moist and wonderful! Mr. Picky Eater loves them and asked me to make more – I probably will make some tomorrow but I may let them rise a little again after I make them into rolls. Here’s a tip for everyone: When you see a cool picture of a recipe that you want to make, go to the original post – but make sure it’s the original! Sometimes it’s just a mythical idea and not real at all. ***However, if I am completely wrong and someone has actually made them AND they look like actual bunnies, please let me know who by sending me a link*** 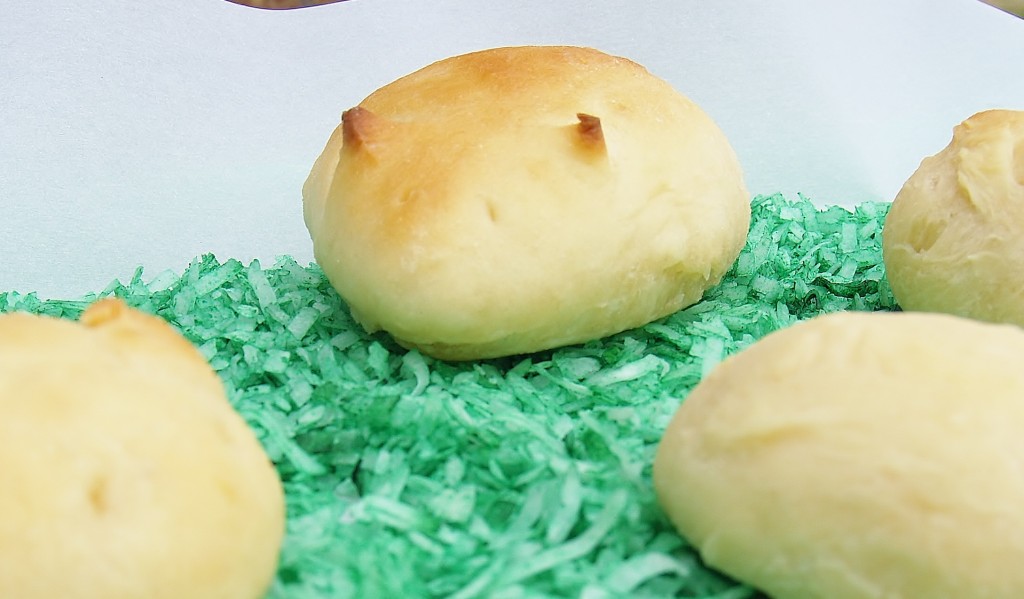 Edited Note**** One of the people who read this post has alerted me to a link that will take you to what is apparently the original post (see below) with the picture, albeit darker and hazy. On that blog post it says the bunny “rolls” are actually cookies from a Japanese bakery in Paris. A mold was used – it’s not bread at all!!!***** 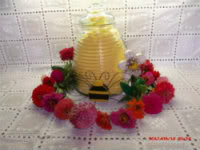 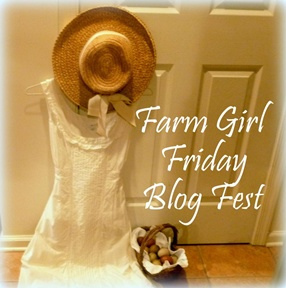