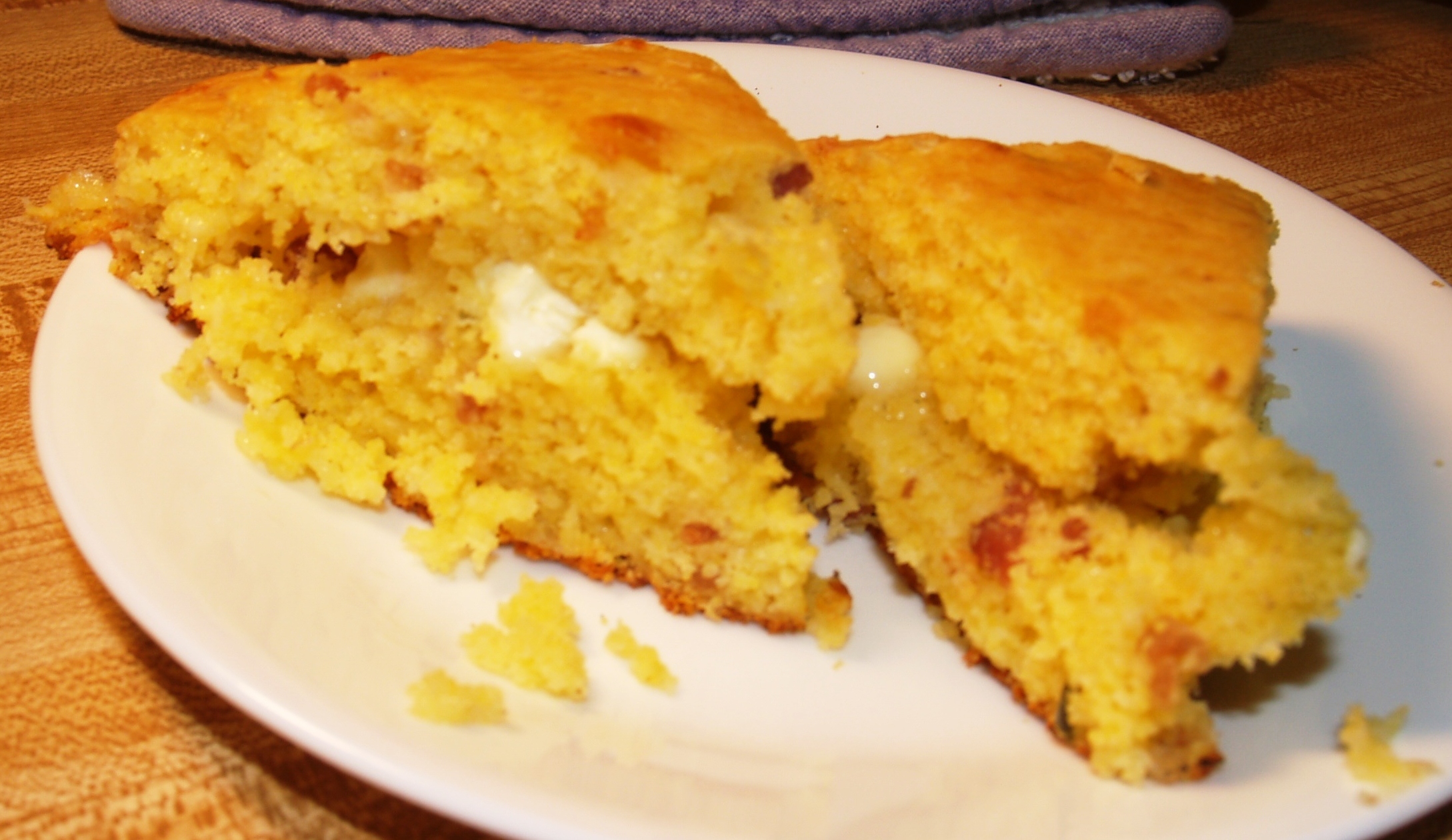 This has been “Spoil Mr. Picky eater” all week long. As most of you know, my husband and I work in public service. On December 5th, I will have been with our agency – the place we met – for 18 years. Around my birthday, Mr. Picky eater (MPE) celebrated his 23rd anniversary. We both came to work here because of our belief in public service. It is certainly not a legacy within either of our families and although my dad relented a short while before he passed, MPEs family has never understood his “need” to help others. We both felt this way from an early age. We have even passed this feeling down to 2 of our children. About three years ago, in our state, some very bad things happened in a division of our agency that MPE and I have never worked in or even have much knowledge about. Those atrocities became public through the media and what started as a constructive critical look at some weak spots, became agency-wide sport for media, legislators, and disgruntled clients. I’m pretty much a paean as an administrator however; MPE has a very high profile position. Over the years, he has been accosted in the grocery store, at church, the movies, state fair, even at the local 7-11. The thing about MPEs job is that there are only 52 other jobs in the United States like his. That means, of course, there are an extremely limited number of people who know HOW to do this job. Surprisingly, although our state is at the bottom of most lists for good things, his department is the benchmark for every other state in the union (and our territories as well). THE BENCHMARK in electronic payment systems.

I’ve spent several anniversaries, birthdays, and other special occasions sitting alone in a restaurant while MPE is outside on the phone trying to make sure clients, grocery store owners, day care owners, and custodial parents receive what the state has promised and within the time period promised. It is a very lucrative department and a very hard job that oversees $1.6 Billion per year. Yep, Billion with a “B”. He was blessed with a nearly didactic memory that allows him to mentally reference by page (and sometimes paragraph) a contract that is 2 and ½ feet thick. MPE is a very smart man who came from a hard scrabble childhood to pull himself up by his own bootstraps and make a good life for him, me, and the kids.

Two years ago in February, there was 2 inches of ice covered by a foot of snow on the ground and the roads were so treacherous, the Governor closed our offices. However, we are never “off” as long as we have computers. I spent ½ the night and all day making sure all 22,000 aged clients I help serve were safe, warm, and had all utilities – coordinating services and resources for those who didn’t while keeping an eye on the safety of those who were helping them. MPE spent two hours driving the 20 miles into our state office in order that a lady and her three children, living in a far northeastern county, who had no food, had access to food that day so her children would not suffer from hunger – and then it took nearly four hours for him to drive home. He didn’t have to do that but he’s just that kind of man. He can’t stand to think someone doesn’t have enough food – and neither can I. It is a part of our genetic makeup I guess.

Two weeks ago, MPE came home and told me he had enough. Enough instability, name-calling anger from all sources, constant work and no time off (he has over 500 hours of unused vacation time). His health and our marriage had taken some pretty good hits in order that we might fulfill our calling. Even though he was 18 months from retirement, he was resigning his position the next day. At first, I thought he was blowing off steam like we all do from time to time but he did seem somewhat resolute. Sure enough, the next day he tendered his resignation and Thursday, November 15th will be his final day of work. We are lucky enough that he can rest over the holidays which is a welcome change for a man who began fulltime employment at age 15 in the tomato, watermelon, and hay fields of Central Oklahoma. He is also nervous about the unknown so that is why this week is “Spoil Mr. Picky eater” week. I already made him Nana’s Banana Pudding. Today, I’m sharing one of his favorite recipes that actually use a mix but tastes wonderful!

These are the ingredients that you will need: 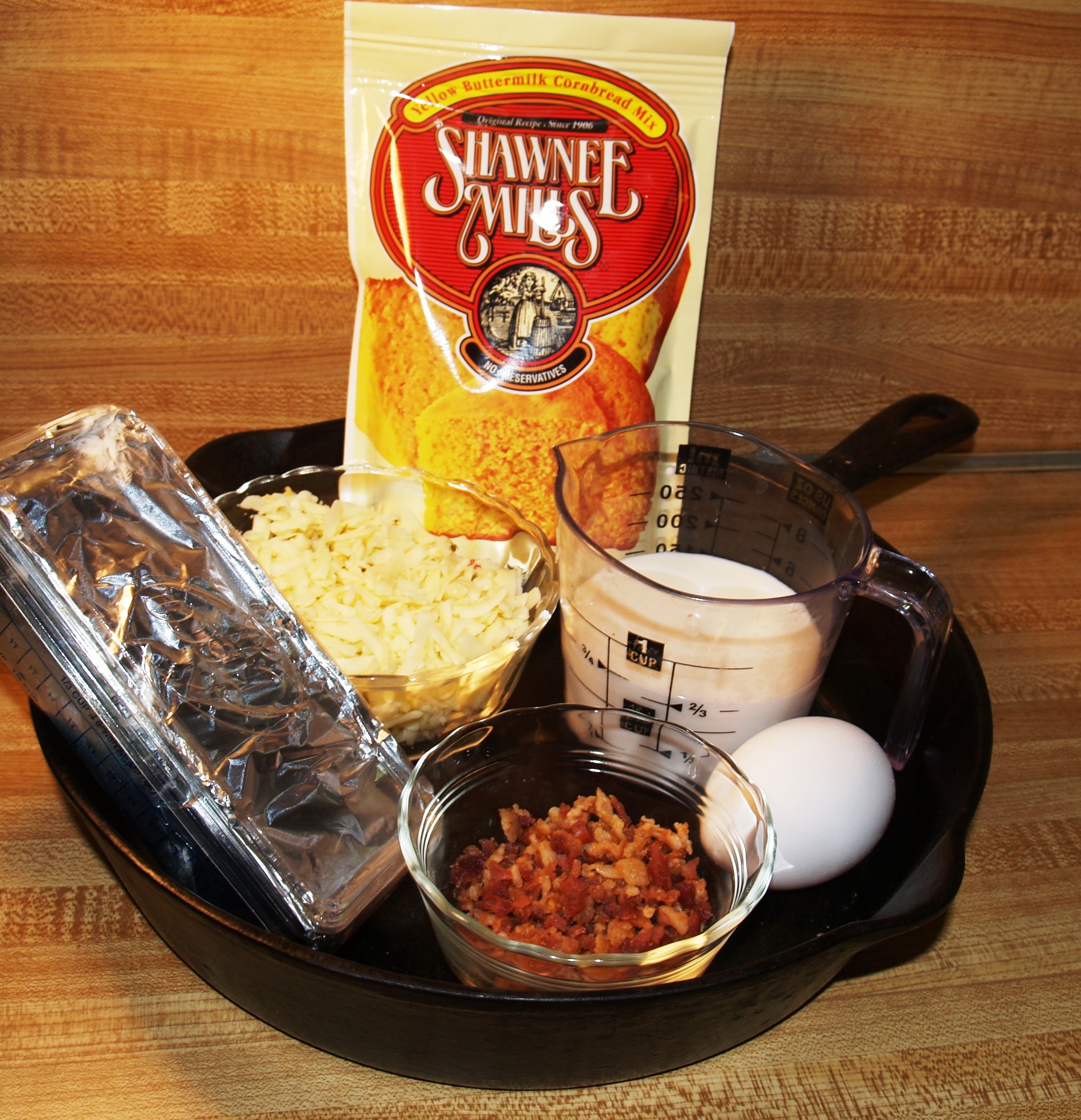 Note the iron skillet. The one I use is about 8 inches across.

First, you turn the oven on to 425 F. While it is preheating, take a paper towel and rub shortening all over the inside of the iron skillet and put it in the oven so it will get very hot! 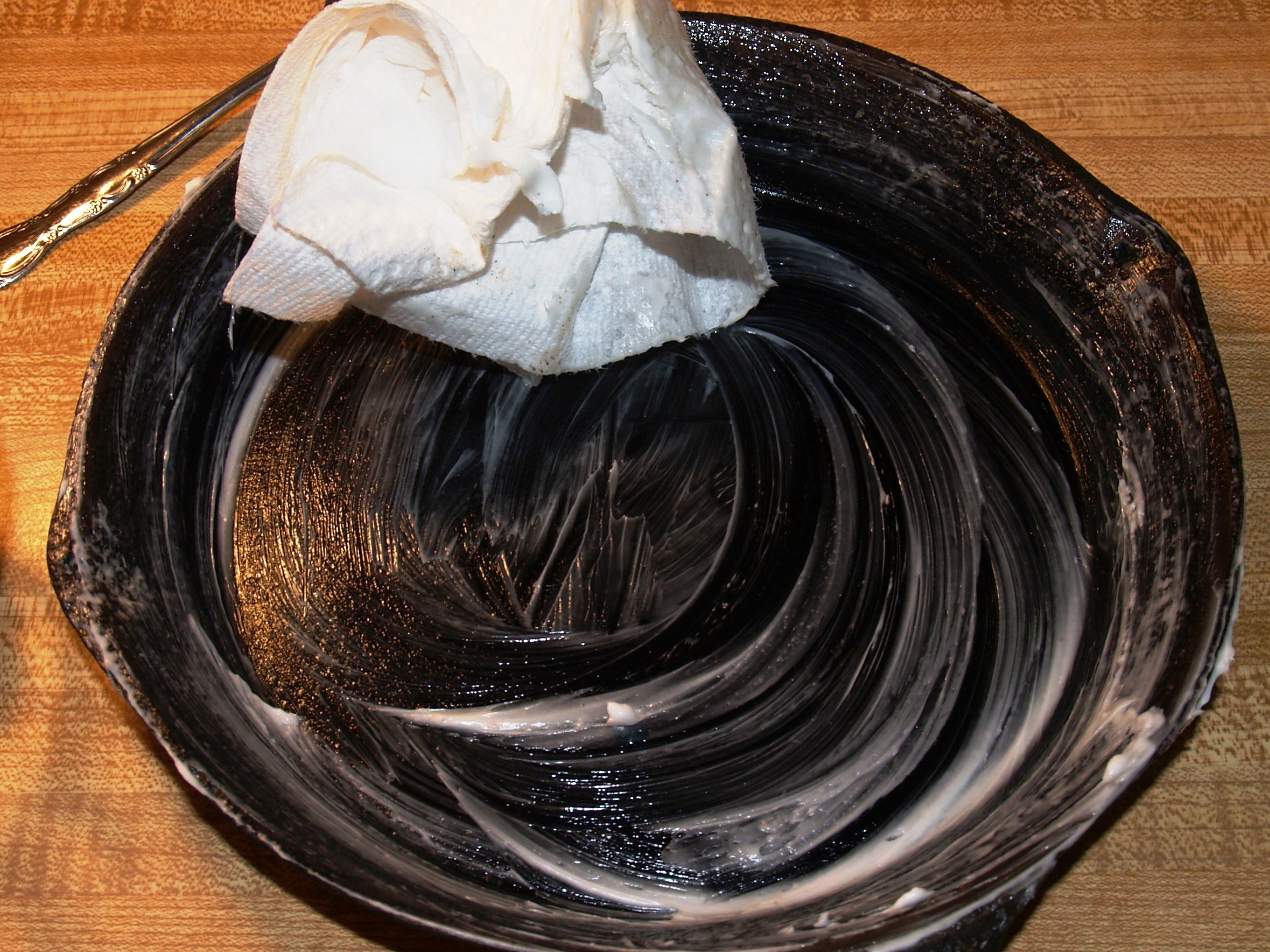 Prepare the cornbread (or corn muffin if you like a sweeter taste) mix as directed. Add 1 Cup of your favorite shredded cheese – we use pepper jack cheese for a little spice. Also add ½ cup of prepared bacon or fry your own and cut very small.

Pour the mixture into the very hot iron skillet (you will hear a sizzle) and place in the oven for about 25 minutes. 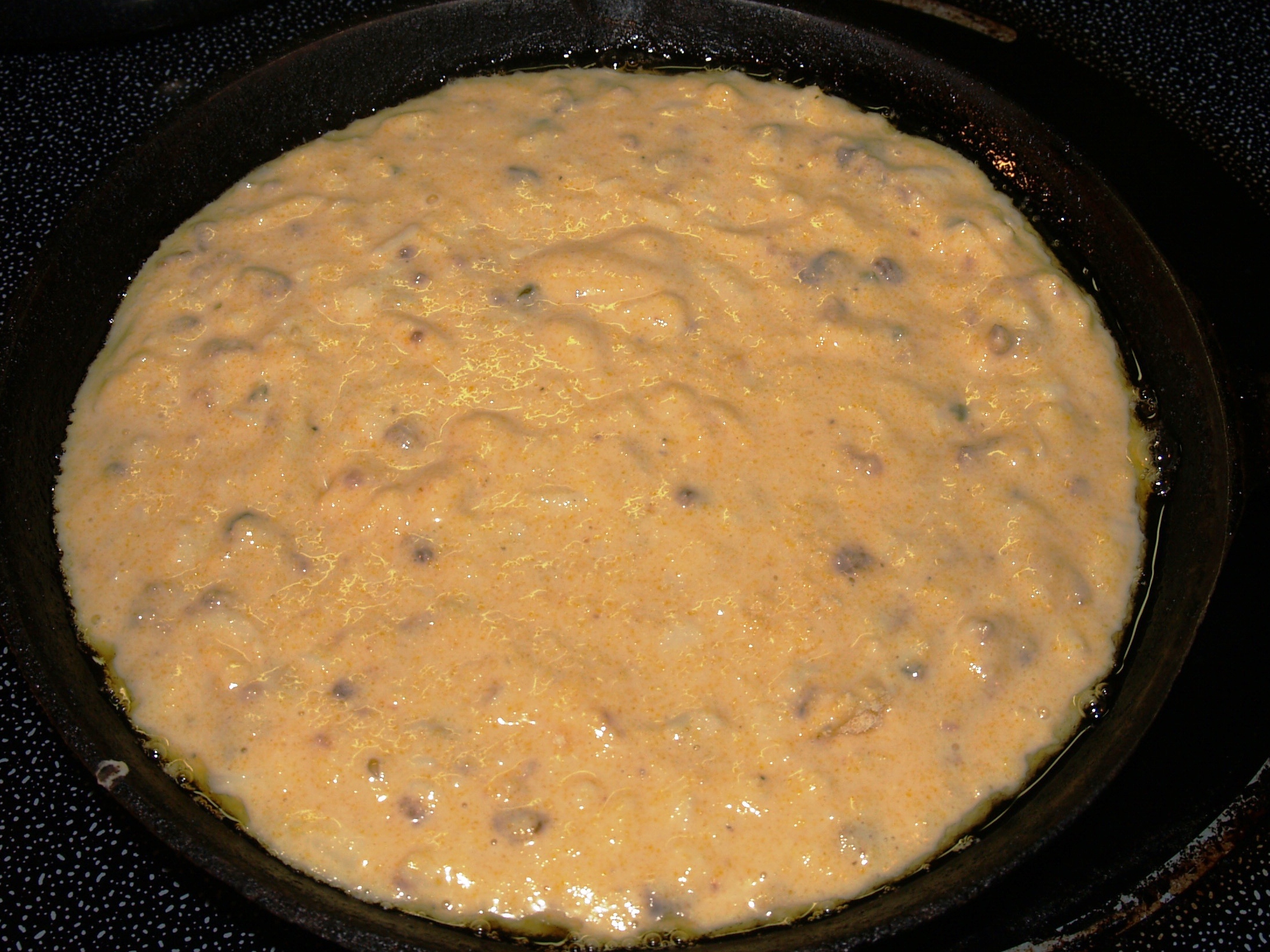 When it comes out, it will look like this. The hot iron skillet gives the outside a crispy texture while the inside is moist and tasty due to the melted oozy-gooey cheese and a savory taste with the bacon. 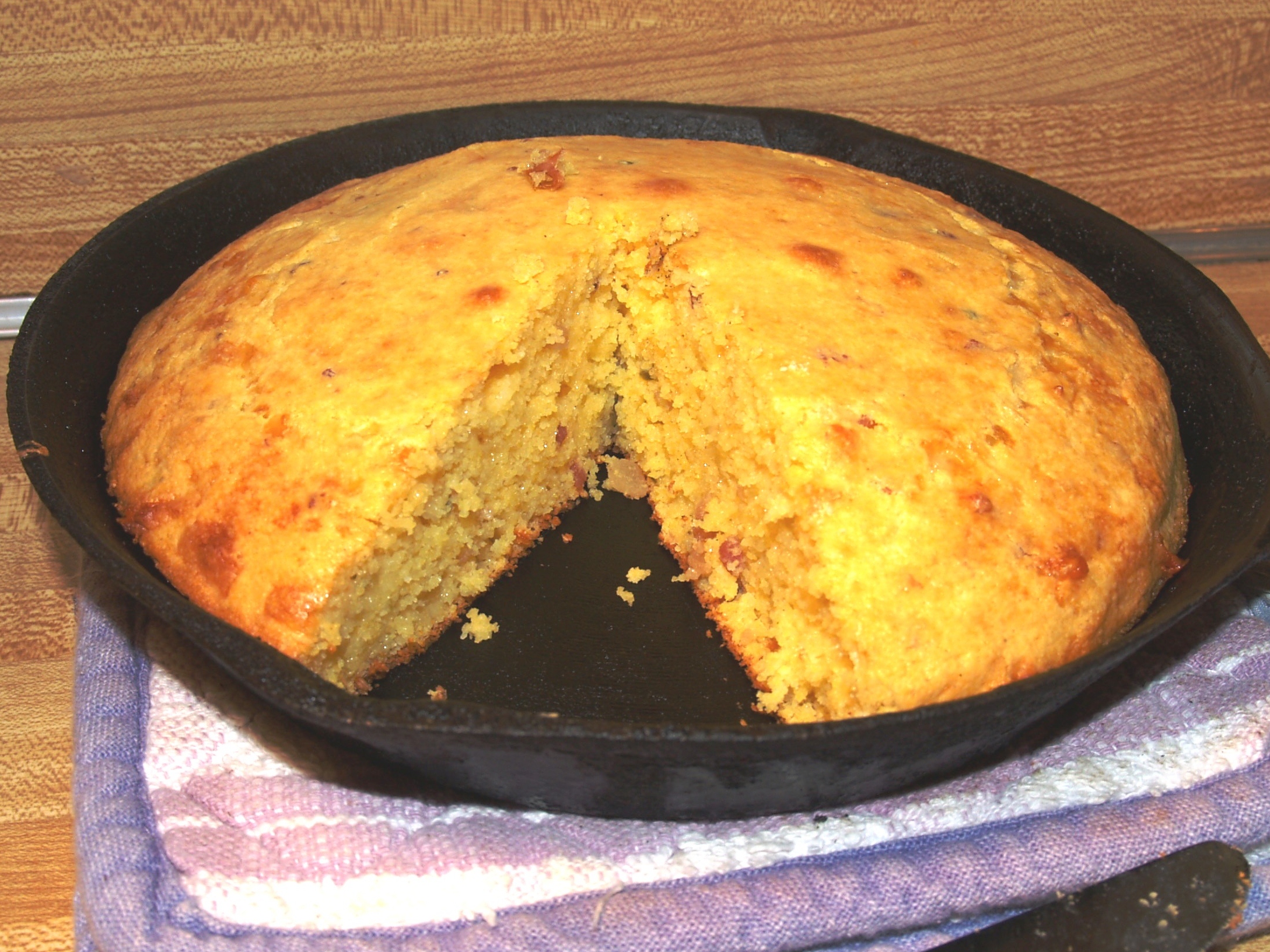 Just look at the delectable slice of heaven! It made our Saturday evening meal extra special. Day after tomorrow, he becomes a house husband and I become the major bread winner – all I was want is to see a clean house, supper on the table when I get home, and well-behaved dogs! Hahahahaha!