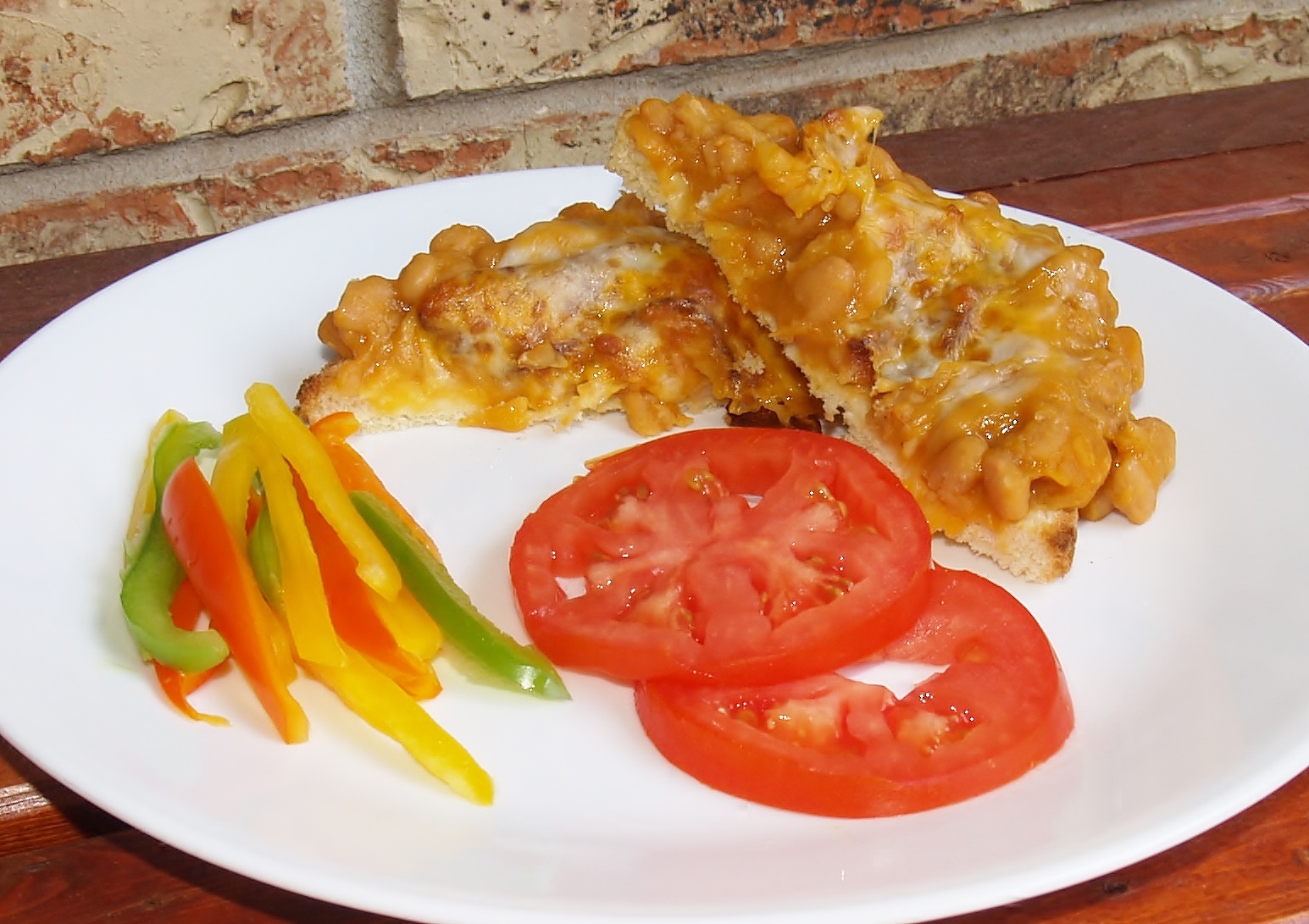 When I was a child, three women mom take care of me…….yes, I was probably a handful but mostly because mom worked full-time back in a time when women didn’t go to college and have careers. Of course my Nana took care of me after mom was widowed and we moved back to my grandparents’ home but when we moved again so mom did not have to live with her parents, she needed help. I am unsure of the status of day care centers back then but I had private sitters who came to our home before I got up, got me ready and fed me breakfast. They took me to school if school was in session and they picked me up afterwards taking me to various lessons. They even sat and waited while I practiced the piano, flute, guitar, swimming , horseback riding, art or whatever it was I was learning about, then they brought me home and stayed until one of my parents arrived from work.

The sitter who cared for me the longest was Mary Wicker. She was from England so she spoke with a staccato British accent that I liked to imitate. She always wore jewel toned dresses and soft powdery make up. She also smelled really good – I asked her why she smelled so good once and she said, “White Shoulders”. That always confused me until I was about 9 and I found out White Shoulders was a perfume! Mary came to America with her husband after WWII but he passed away and so did her second and third husband….interesting to me now but no one thought much of it back then!  She used to take care of the La Fortune children but when they outgrew needing a nanny she decided to move from Tulsa back to Muskogee and take care of me. I must have been quite a change from the very privileged La Fortune kids.

Occasionally, I would get to go to her house during the summer instead of her coming to ours which was always such a treat! Her backyard was small and fenced in so livestock did not bother you every single time you wanted to play. And there were sidewalks – real sidewalks to ride your bike on instead of an unpaved country road. I got to ride for two full hours every morning as Mary sat on the porch and read the newspaper. She had ducts in the ceiling that piped in air conditioning to every single room ALL THE TIME! She had not one, but TWO TVs, one in her bedroom and the other in the living room. She had frilly wispy white sheers gracing all her windows and shades to pull down if the sun was too bright. Her carpet was white – yes, white and thick and wonderful to lay on watching TV. She made the very best burgers ever and it must have been because she only purchased steak and then ground it into hamburger meat right in her kitchen with a hand-grinder. She always made me a freshly ground hamburger for lunch when I stayed at her house and that meant Duke’s Mayonnaise! You couldn’t even buy it in Oklahoma. She bought it on her travels to Texas and wouldn’t even consider buying another brand. I love Duke’s to this day but you still cannot get it in Oklahoma and having it sent from Amazon is inconvenient. After lunch, she would send me into her bedroom where I had to take a nap. It was easy because when she pulled all the shades down it was dark and cool. I used to lie on her old-fashioned white chenille bedspread looking at the ceiling and waving my arms up and down the spread like I was making a snow-angel. During this time she would sit in the adjoining bedroom and sew on her treadle machine, the whirring rhythm sending me to sleep.

When I woke up, the Pinky Dinky man would be close by and we could hear the strains of his music as he came closer and closer. Mary would go to her clothes dryer and lift up the towel revealing her purse….yep, Mary said no thief would ever think of looking in there for her money, and she was right. She was burgled once and they did not take anything because the televisions were too big and heavy and she kept her money in the clothes dryer, her jewelry in an empty box of detergent on top of the dryer and her silver was kept in a hot water tank that when purchased new, dad cut out doors on the back side building shelves for sitting silverware boxes onto. When the silverware was placed inside, the doors shut and the tank turned around in the garage, it looked exactly like a working hot water tank. Back to the purse, she would take out two dimes and hand them to me. We would go to the front door where we always crossed ourselves (I am not a Catholic) as we passed pictures of John F. Kennedy, Robert Kennedy and Dr. Martin Luther King, Jr. I really didn’t know who these men were, maybe her brothers? I didn’t know but Mary thought they were important so I did too! I would buy two Dreamsicles and we would eat them on the front porch waiting for either mom or dad to come pick me up. Those were the days when the livin’ was easy, that’s for sure!

For breakfast at her house we also always had the same thing. What she called a proper English breakfast. I have no idea if it is or if it isn’t but I still have them sometimes and even Top Girl loves them. There will be some of you who turn up your nose at this but don’t knock it till you have tried it, because it is some goooood eatin’ – as Cousin Eddie would say!

Here’s what you will need:

2 slices of white bread – hey, it was the 60’s and we loved our white bread. Use whatever you want.

1 ½ Tablespoons Colman’s Mustard. You can use other kinds but this is the best – spicy!

2 Slices Tomato – I put them on the side

1 slices of real cheese or some shredded – sharp Colby is good. 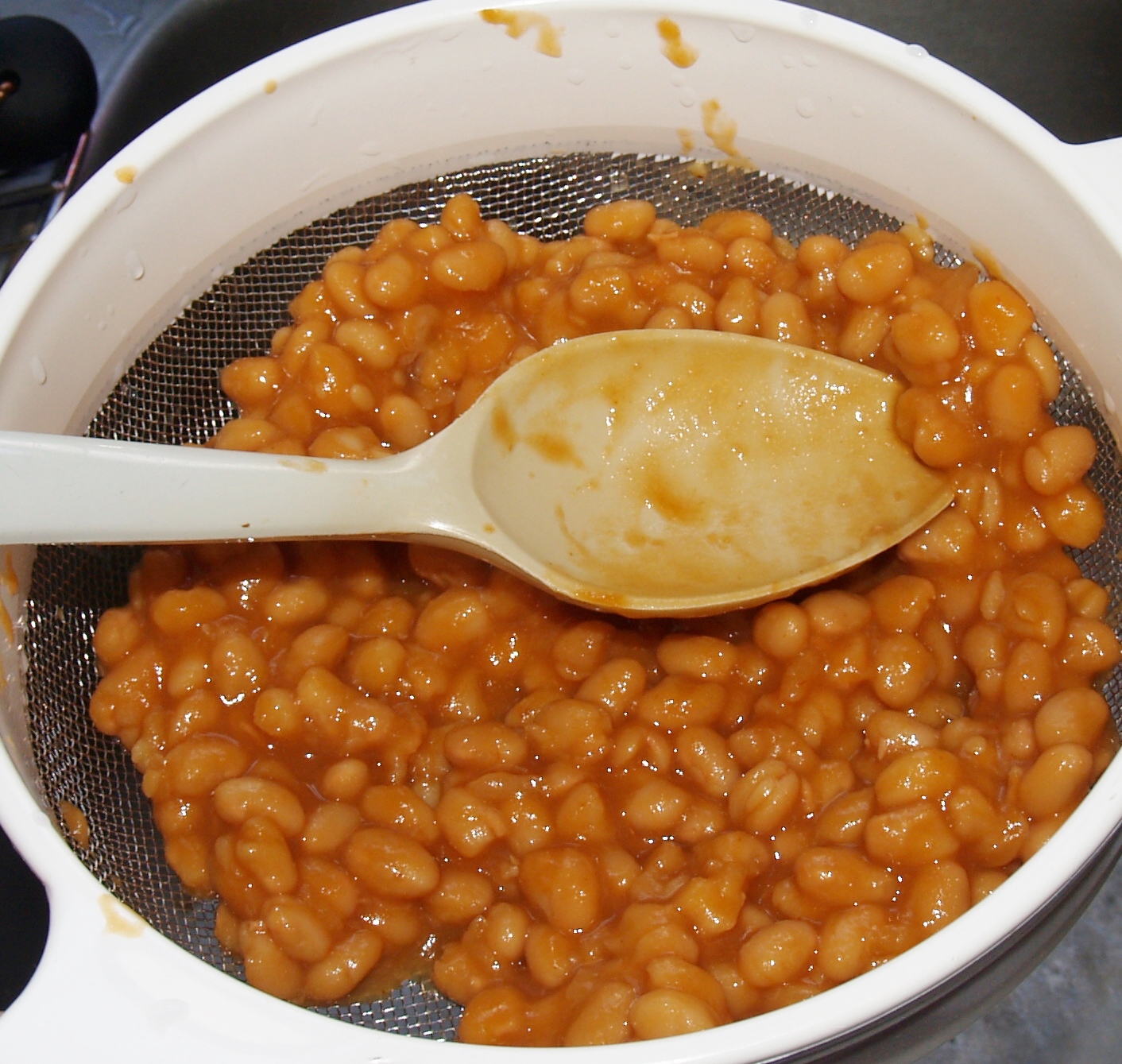 1. After draining the Pork –N- Beans, mix the mustard into it.

2. Place bread slices on a cookie sheet and turn oven on to 350 F

3. Spoon the Pork –N- Bean mixture onto the tops of both slices of bread. 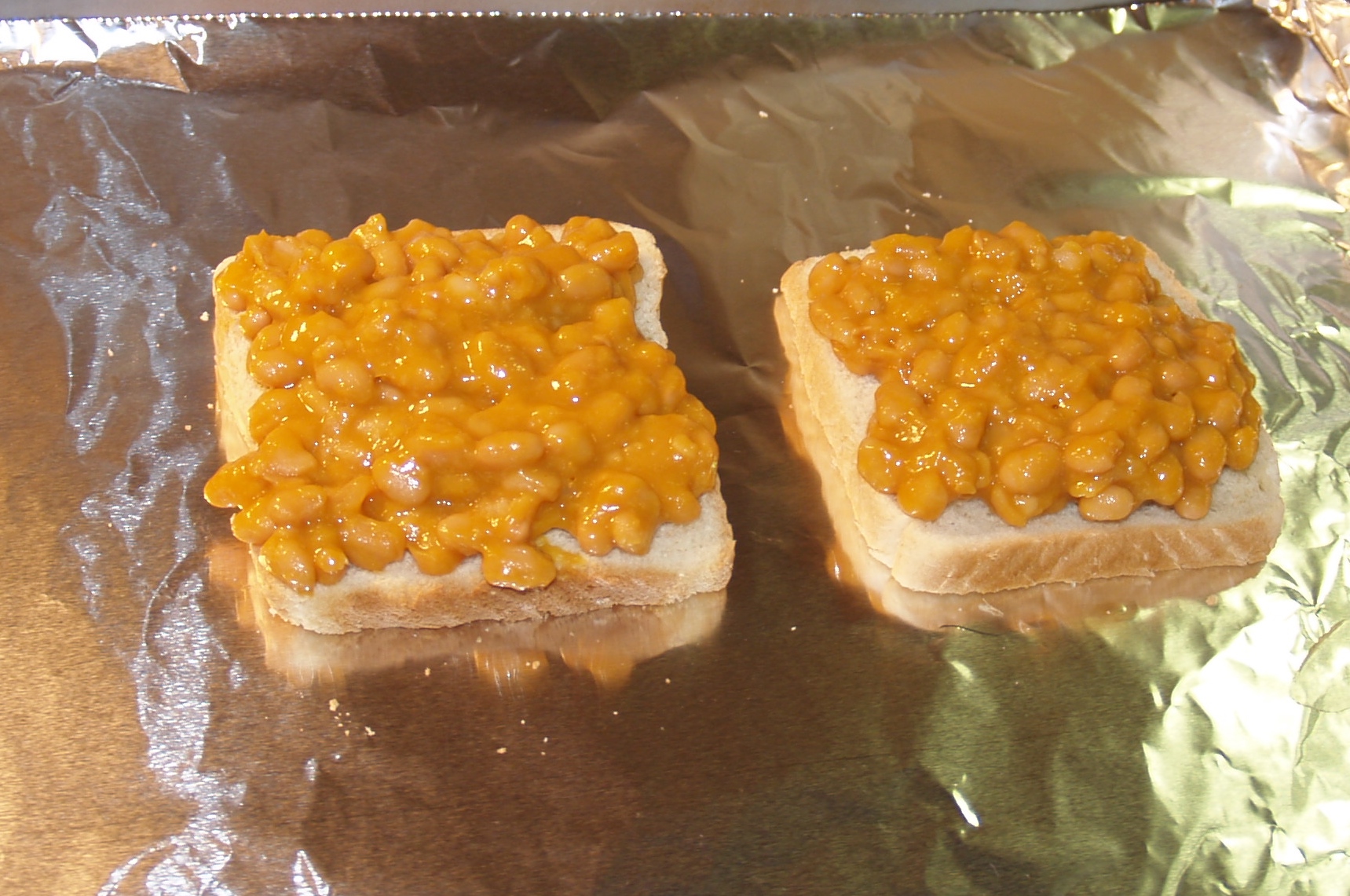 4. Add 2 slices of bacon onto each piece. 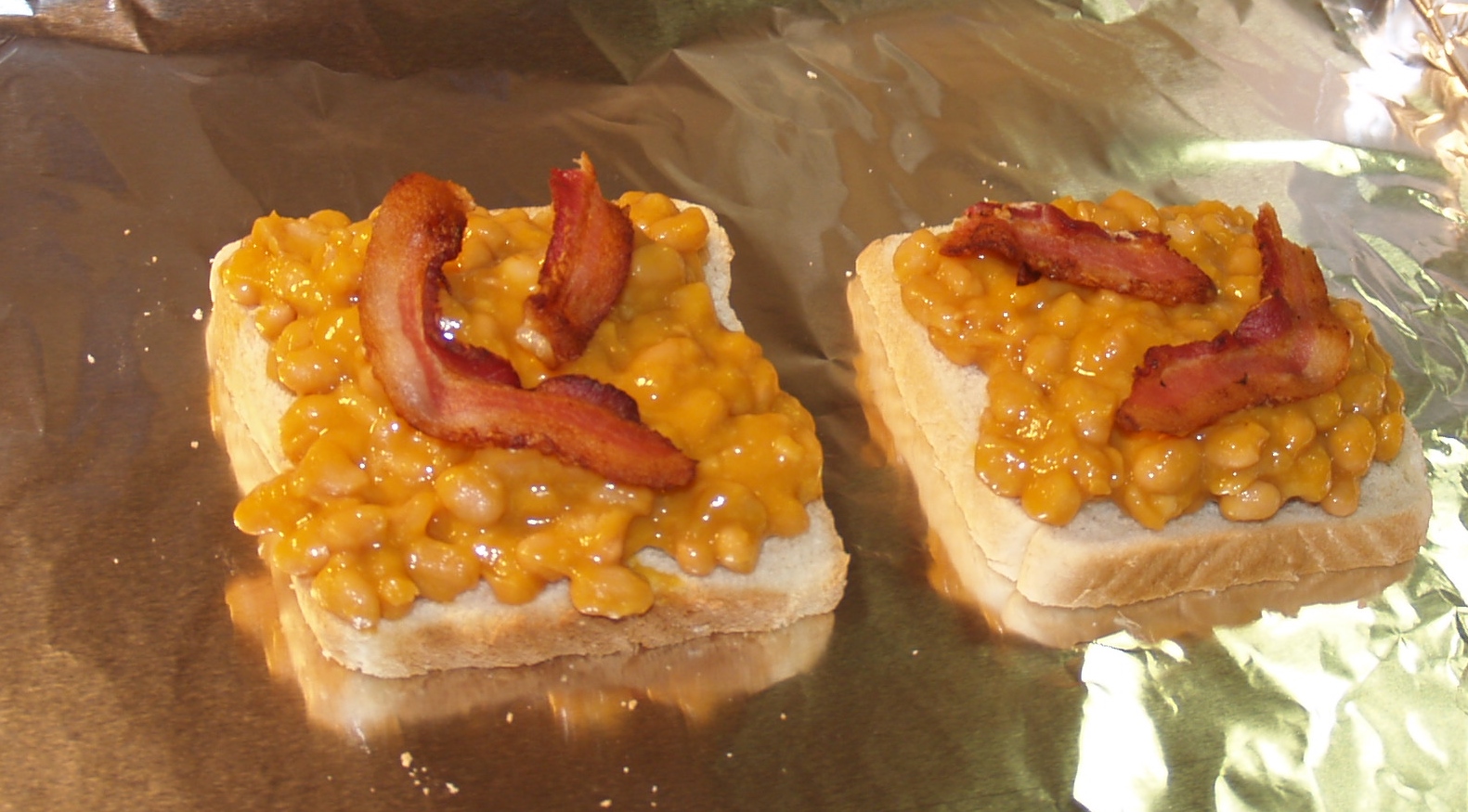 5. Then add the sliced tomato that has been blotted dry with a paper towel. 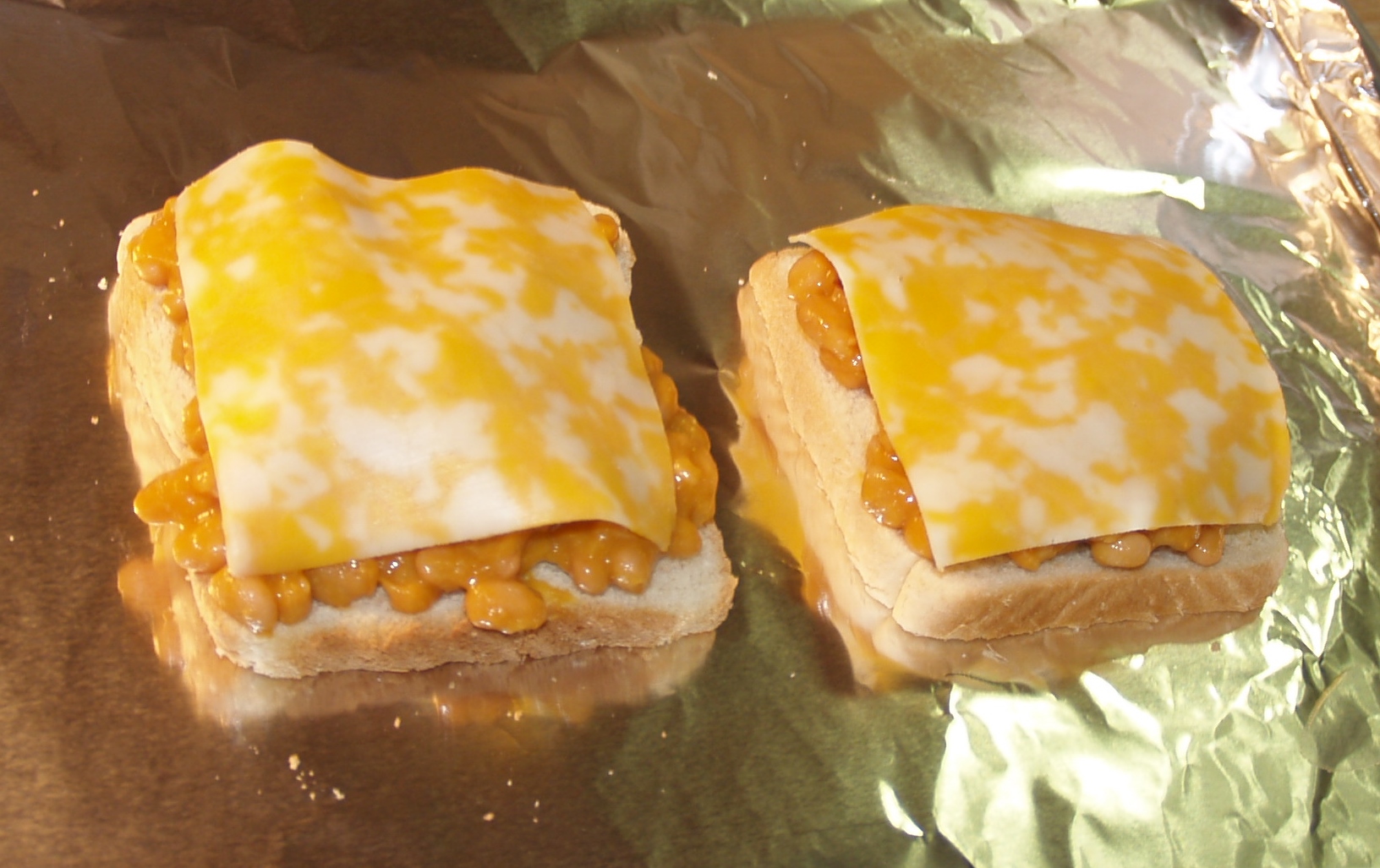 7. Set in oven for 10 minutes, then for last-minute, turn oven to broiler and let the cheese get a little brown.
And there you have what Mary called a Proper English Breakfast. YUM! 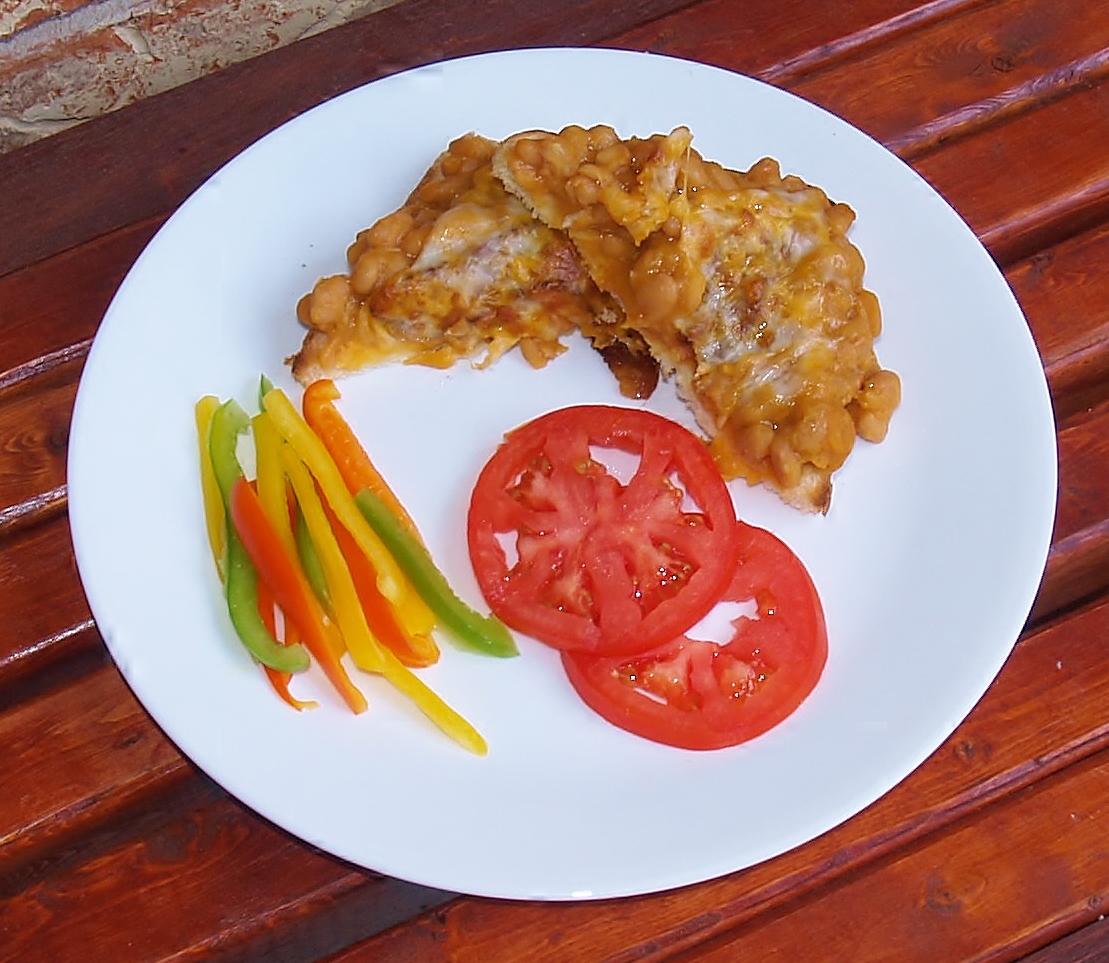 See what a great job my husband did on a set of curbside finds? They are crocks that were REALLY ugly so he used Krylon Glitter Blast and made Peacock Ombre Michael’s Look-A-Like home decor thingies. Didn’t he do a great job? 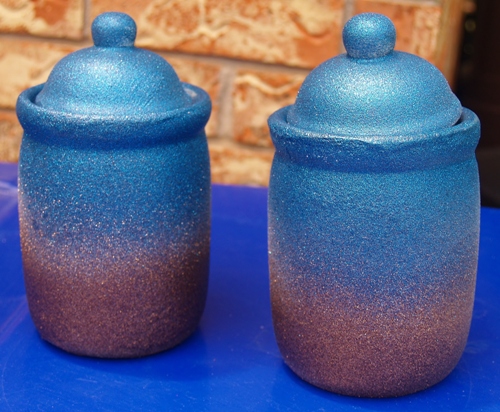