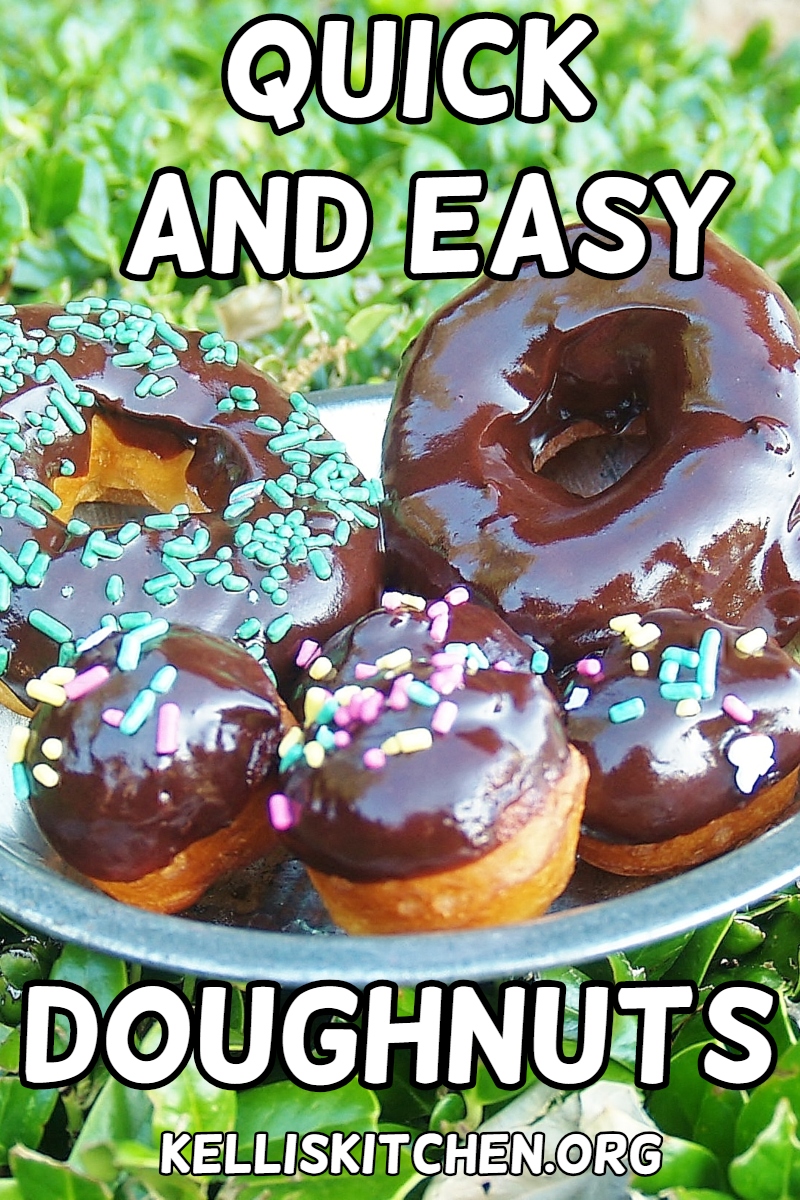 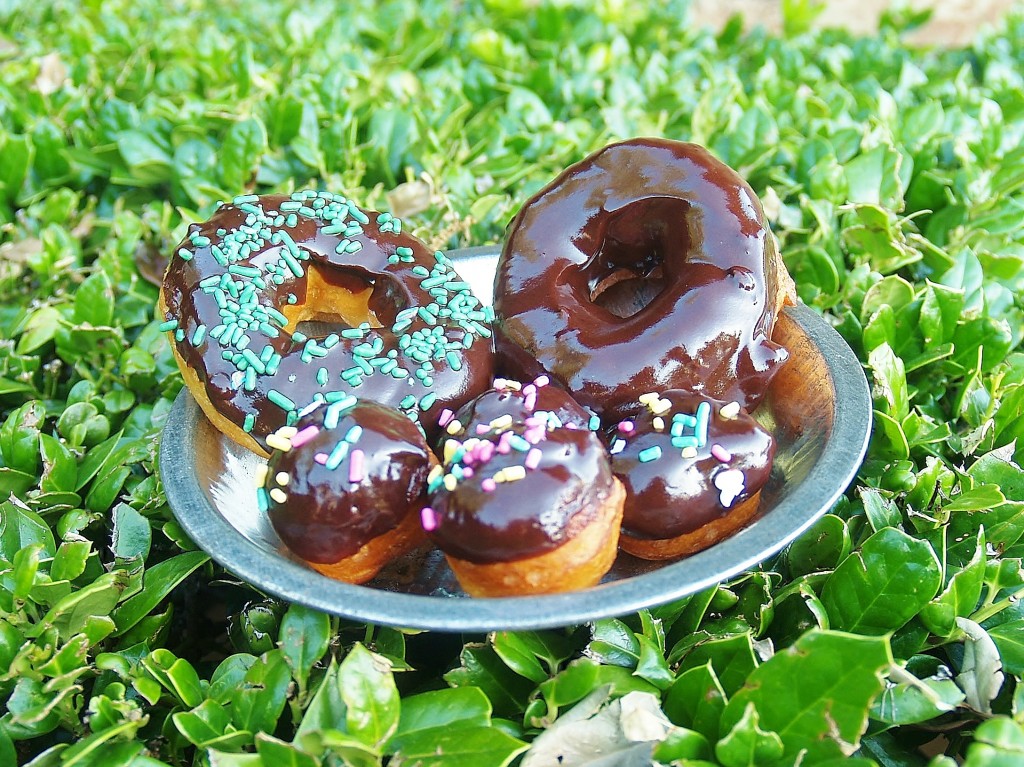 Today is Father’s Day causing me to reflect on my two dads. As far as I know, they had two things in common: me and they each went by a nickname. Buddy and Jack. When referring to them I always say “dad” but for here I’ll use their nicknames. Do you want to find the best ductless range hood for your kitchen? range hood without ducts are an important part of any modern kitchen, as they help keep air quality at a safe level. They do that by sucking in most of the emissions released during cooking and leading them through an airway duct that vents to the outside.

Mother Kalamity met Buddy in my hometown and married him in September of 1961. I was born in October of 1962. Buddy was standing at the corner of 7th and Broadway on his way to have lunch with his best friend, Leo Beller, who owned the local sporting goods and uniform store, when he had a massive heart attack and died. Right on the sidewalk in April of 1963. They called my granddad, the sheriff, who met the ambulance at the hospital and had the awful task of going to the laboratory where my mom worked to tell her.

Details about Buddy are sketchy at best because mom seldom ever speaks about it.  So it’s mostly recollections from family members who have lost or mis-remembered some of the details.   I am told that while the funeral was going on, my granddad was having us moved back home. That’s what happened in those days, you went from your father’s house to your husband’s and if anything ever happened to the husband you went back to your father’s house. Mom could not have credit on her own and the next week my granddad had to go to the bank and co-sign on her car or they would take it back. It did not matter that she had a college degree, a career and a very good paycheck. She could not get a credit card or buy a house. How times have changed!

We lived with Nana and Jim-Pa for over a year and then she met a lady who had duplexes for rent. Mom asked her if she would rent to a widow and child (that part always makes me laugh!) and the lady said yes. Mom and the lady became the best of friends and they became my Aunt Irene and Uncle Ray.  I have her old fashioned Lemon Meringue Pie and Old Fashioned Potato Salad on this site, both crowd favorites!

One Sunday morning, they picked us up for church and said they had one more stop to make where they picked up Jack. He had the swagger of John Wayne and the eyes/dimples of Robert Mitchum.  The next month was my birthday so Jack took me horseback riding – well, he borrowed a friend’s Shetland pony, put me in the saddle and led it around. That is until he threw me off and I went flying through the air. Can you imagine dating someone less than a month and injuring their child? Still makes me laugh. I was fine and he put me right back on that horse. I eventually became a great rider having my own horse for years.

In my childhood and part of my young adult life, I have had two very stressful questions asked of me.

“ Hmmmmmmmmmm……….(after looking at my parents blue eyes) who gave you those big, pretty brown eyes?” I had no idea what they were actually asking and just repeated what my dad told me to say to them.

“Why the Milkman gave me these”!

The other question was asked over and over again – the last time was only about 8 years ago at one of my uncle’s funeral. A woman was introduced to me and she said,

“Oh Kelli I have heard so much about you. Now, was Jack your REAL father”?  Honestly, that was the first thing she ever said to me.

Years ago I developed my own response to that and I have never varied. If someone felt the need to ask me today I would say the same thing:

“Define REAL”. How do you choose between the one who made you and the one who raised you? Both are pretty darn important. Besides, I’ve always liked to think that Buddy got to heaven then directed mom and Jack together.

I guess I will never know what Buddy’s favorite food was, breakfast lunch or dinner – and that makes me sad –  but I do know what Jack’s were and for breakfast Jack loved donuts, especially after he developed Parkinson’s and needed something he could hold in one hand instead of using a fork. He especially loved doughnut holes. Early Saturday mornings when mom would have to work at the lab, we would go over to the local Daylight Donuts and order six doughnut holes and one maple bar, coffee and hot chocolate with whipped cream on top. We cut the bar in half each eating one and three of the holes. It was something we did most of my young life. The doughnut shop is still in the same location and thrives! 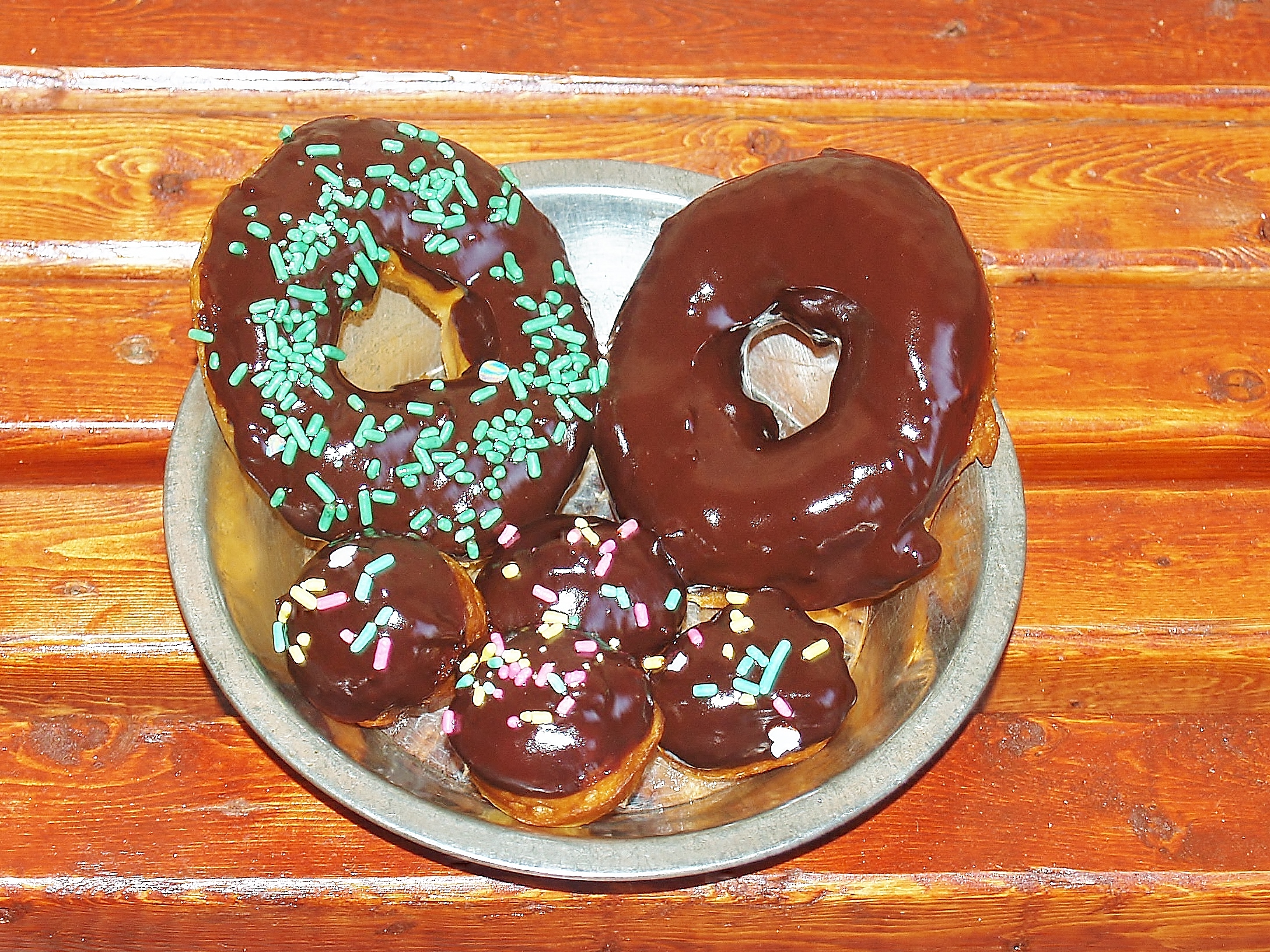 I was a bit surprised when, for Rocket’s first birthday, Mr. Picky Eater went to the local Daylight Donut shop and purchased doughnut holes of which Rocket ate eight! It has become a routine between granddad and grandson that each time he spends the night, they have doughnut holes, coffee, and water. It is a good tradition to carry on. Sometimes though, it can be inconvenient to go out to the doughnut shop or they are sold out by the time we get up and he gets over there. I have looked and looked for a recipe that did not involve buying a doughnut pan or making dough that had to rise.

Finally, last Thursday night I saw a picture and post link shared on Facebook from my friend Joan at Chocolate, Chocolate and More. It was a post from The Pint Sized Baker describing a recipe that meets my needs. Yay!! It is so easy and simple, there was really nothing to adapt. However, I did adapt it just a bit by adding chocolate ganache. The following is my experience with the recipe and I think dad would have LOVED them!

Pop open the can taking one biscuit out and place on a cutting board. 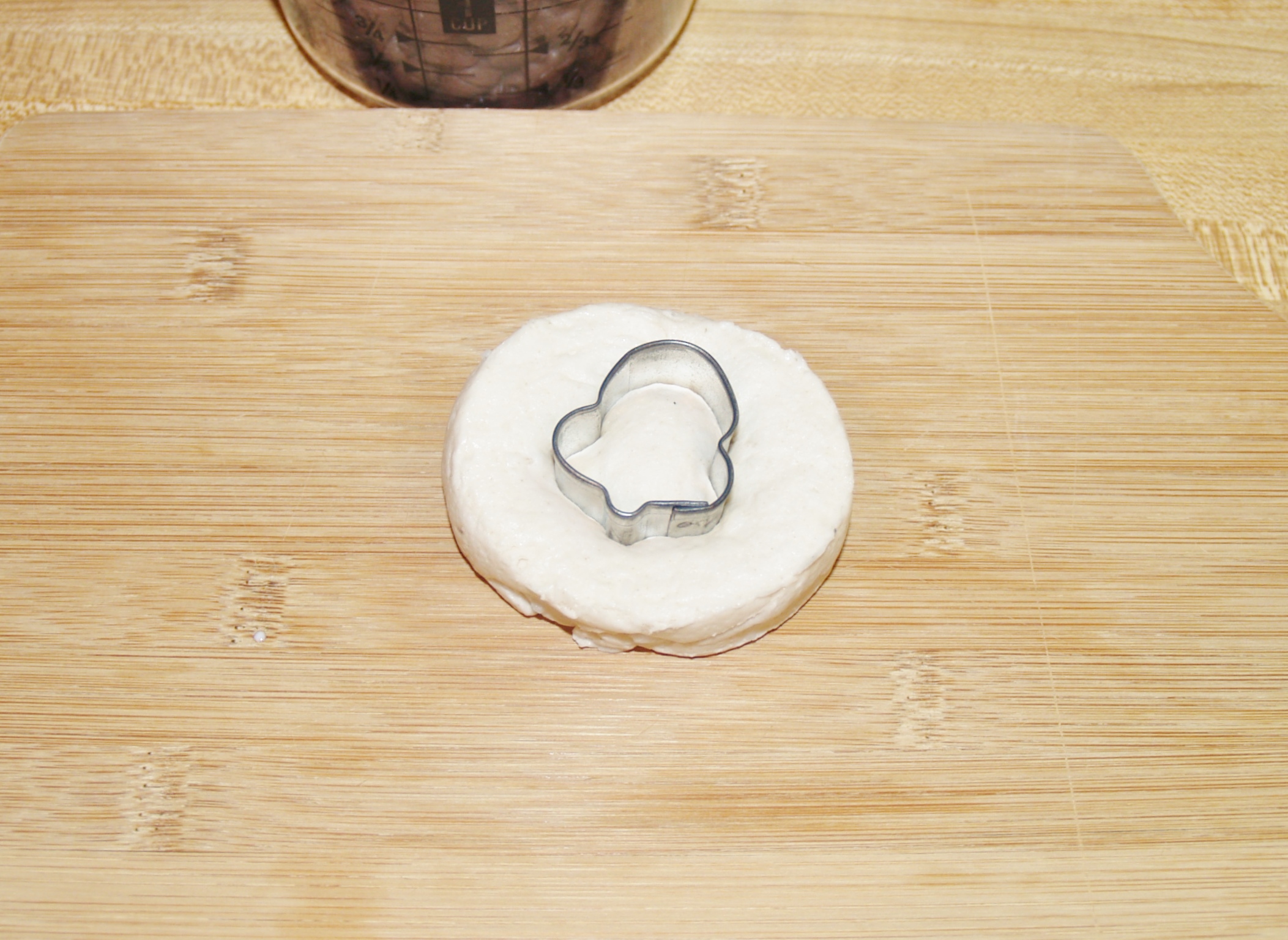 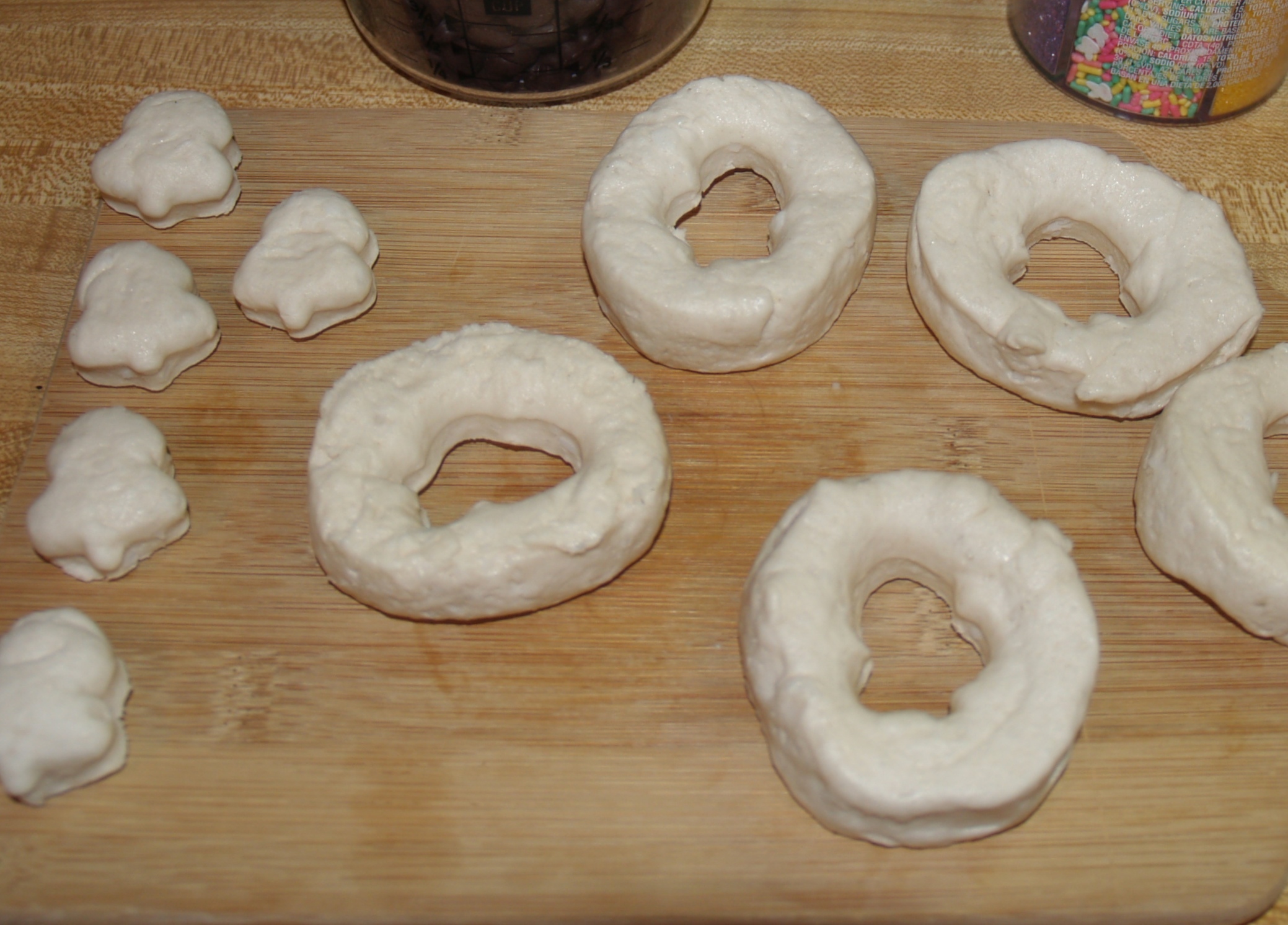 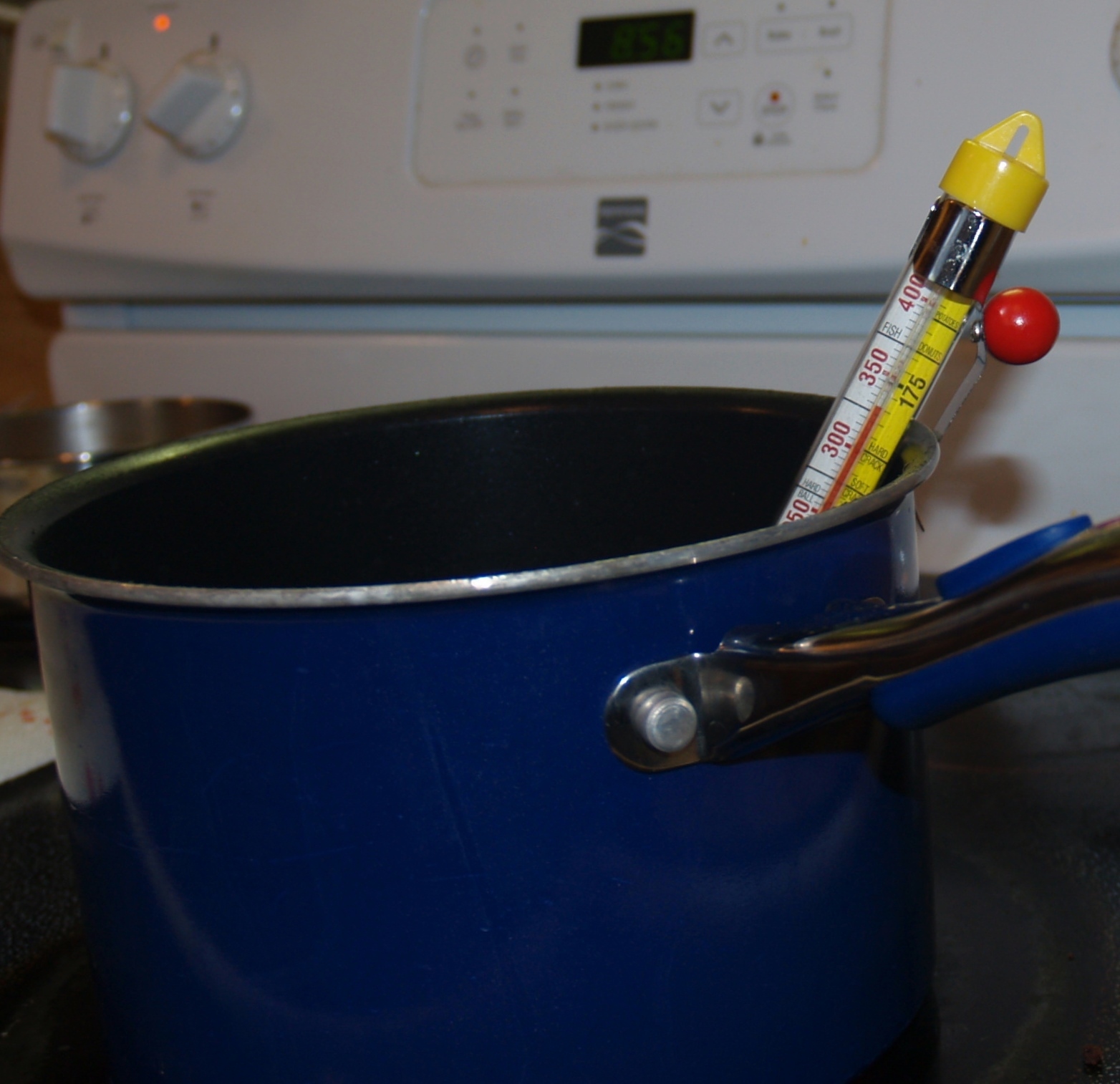 Drop a few biscuits in not crowding. 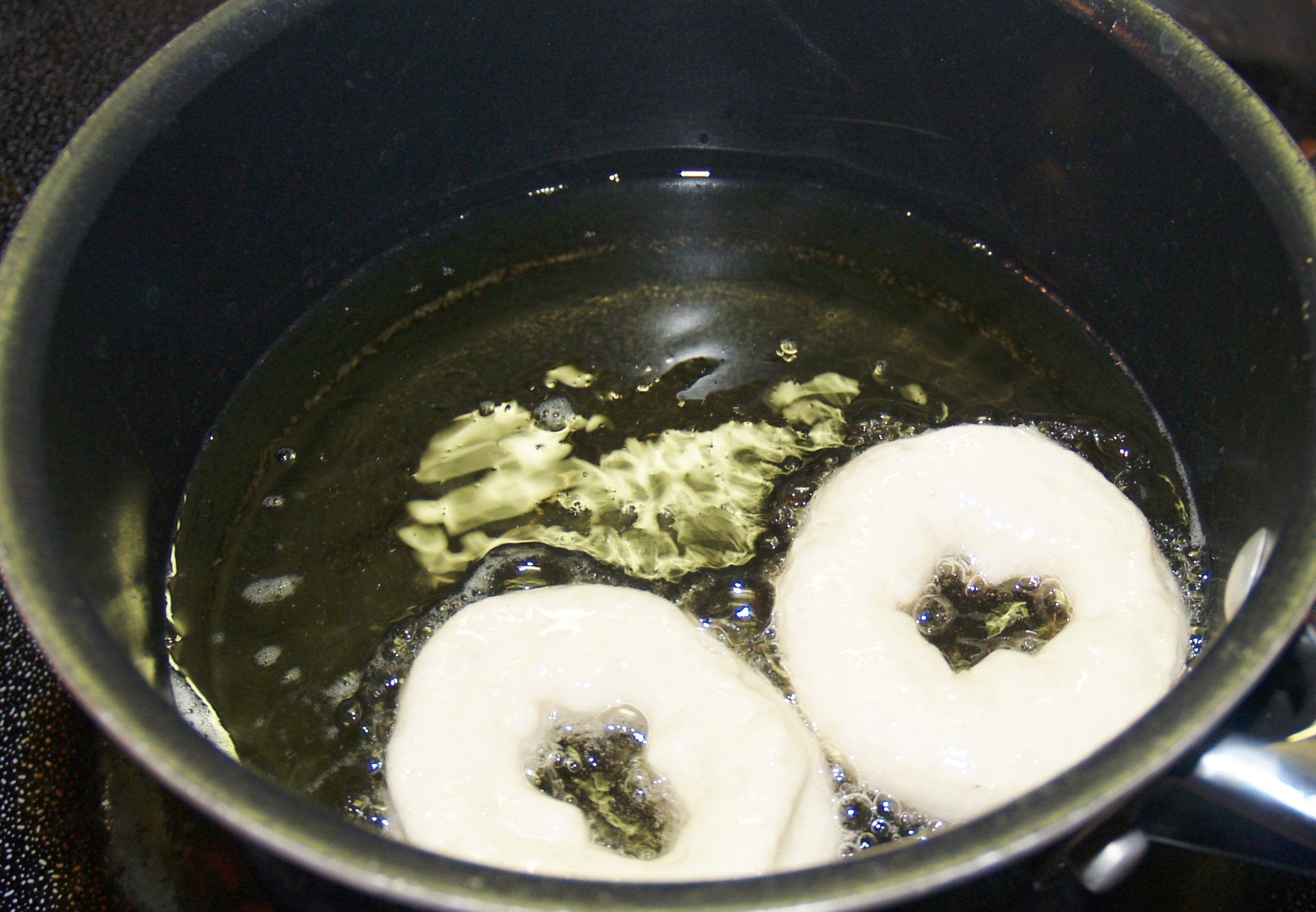 Turn as soon as the bottom turns golden brown. 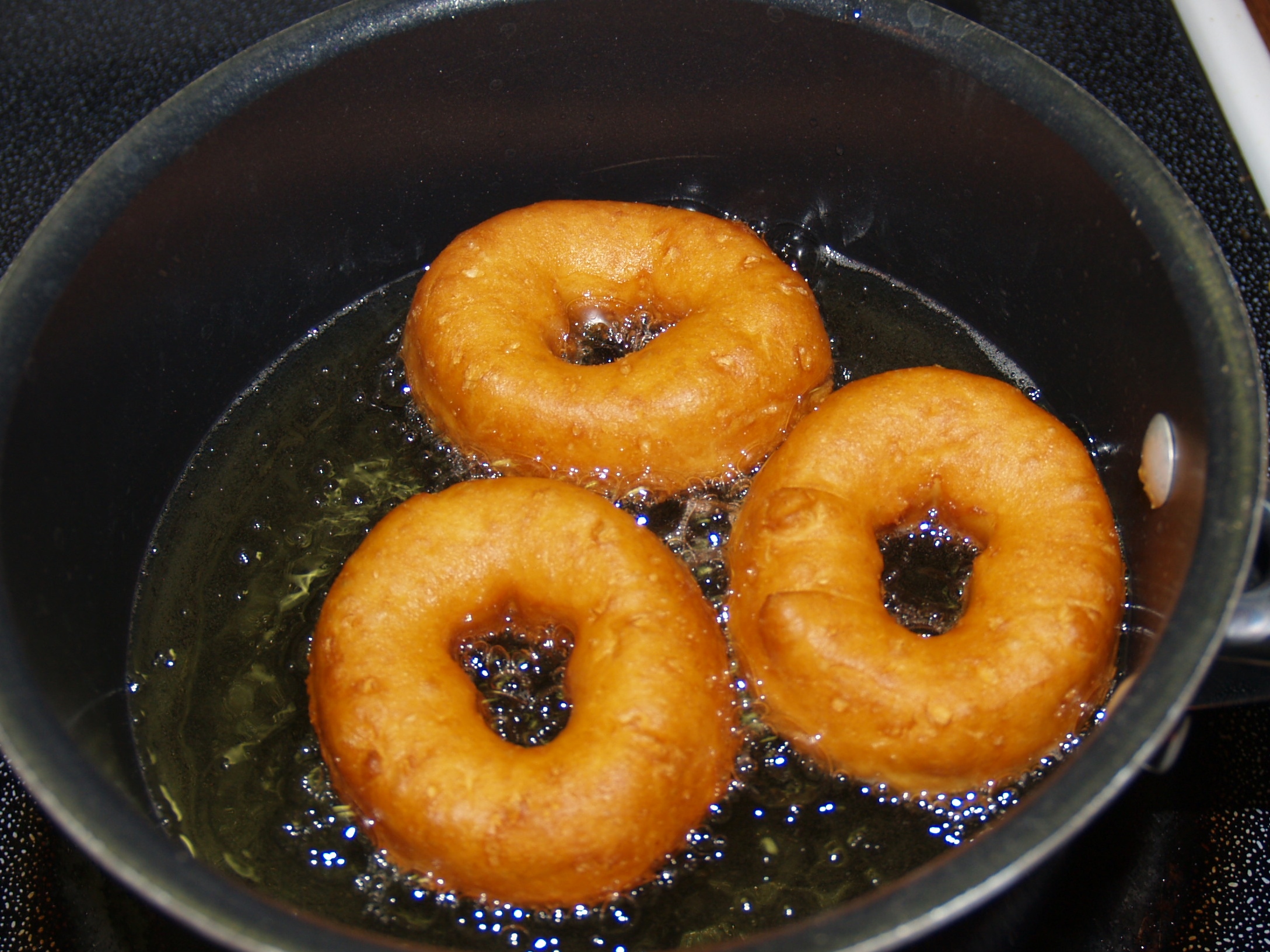 Lay on paper towels to soak up any access oil.
While they are cooling, heat cream up to hot but not boiling.
Take off heat adding chocolate chips and 2 tablespoons butter and stir until smooth and creamy.
Dip doughnuts into ganache then lay on a wire rack and allow to dry just a bit. 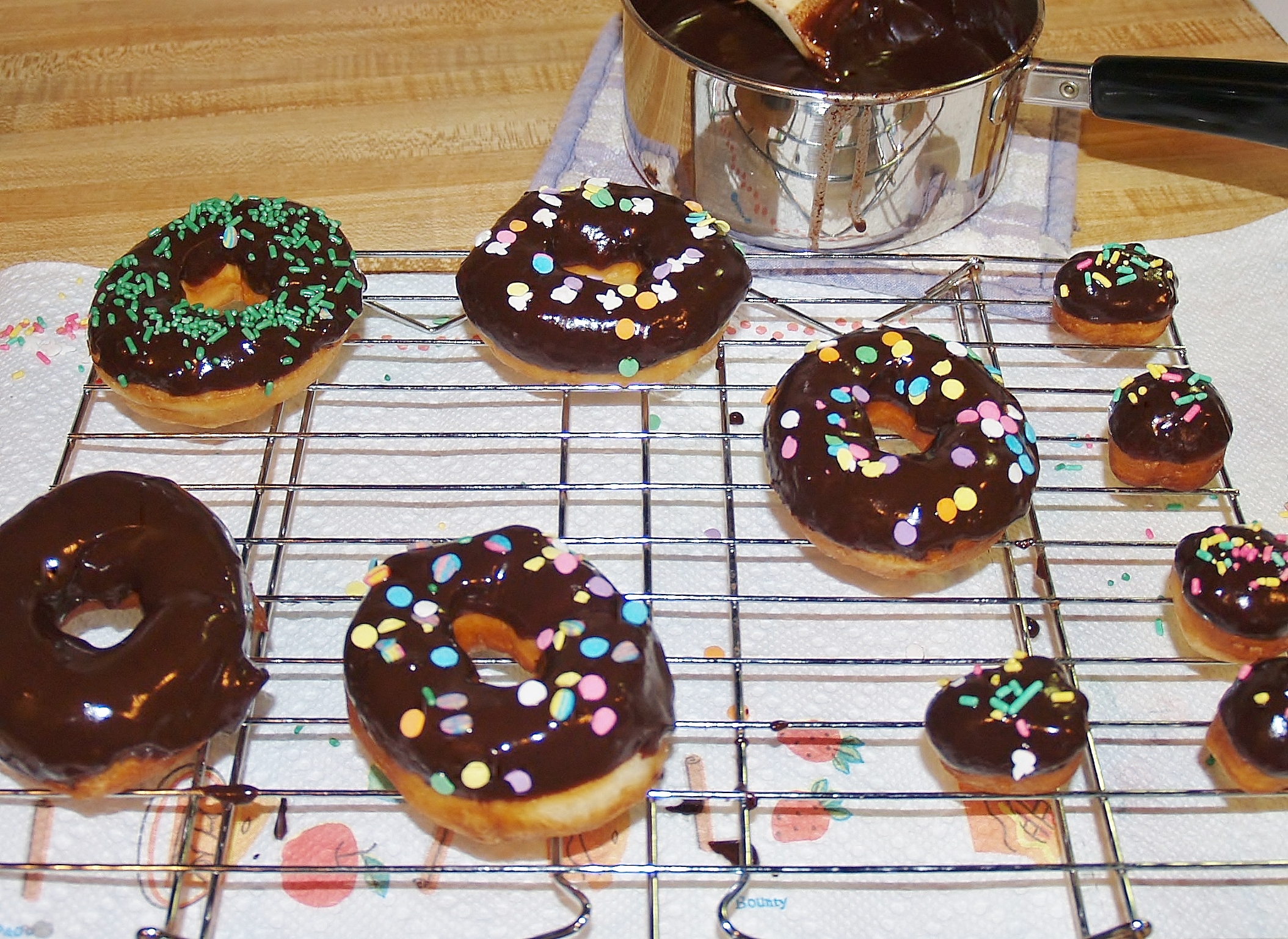 Wasn’t that easy? Just look how much Rocket loved all five of the doughnut holes! 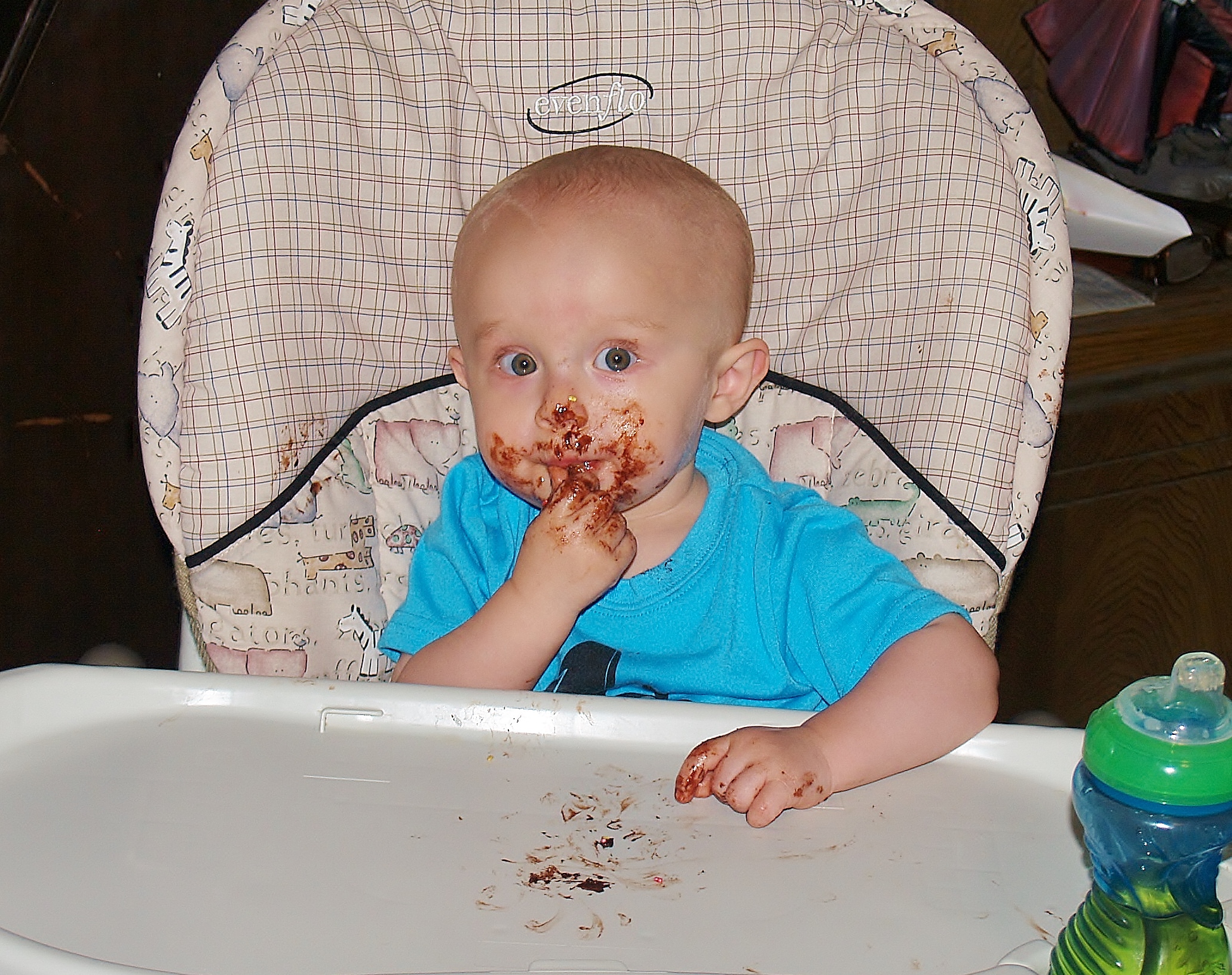 Doesn’t he look adorable?  It even looks like a halo is above his head – such a messy boy!

If you are lucky enough to have 2 dads who are both alive, please be sure to enjoy them both – some of us don’t get the chance.