Good Monday Morning all! I am writing this Sunday night but with auto-post it will come up on the blog Monday morning while I am at work, isn’t that amazing? I love it. We had a lovely long weekend celebrating MPE’s birthday and our anniversary the next day. I hope yours was nice as well. Thursday, MPE’s birthday, we spent the day exploring the area around this part of the state and eating at a MPE-approved restaurant. On Friday, our anniversary, we went south having a lovely late lunch at Giuseppe’s Italian Restaurant. Here are a few pictures: 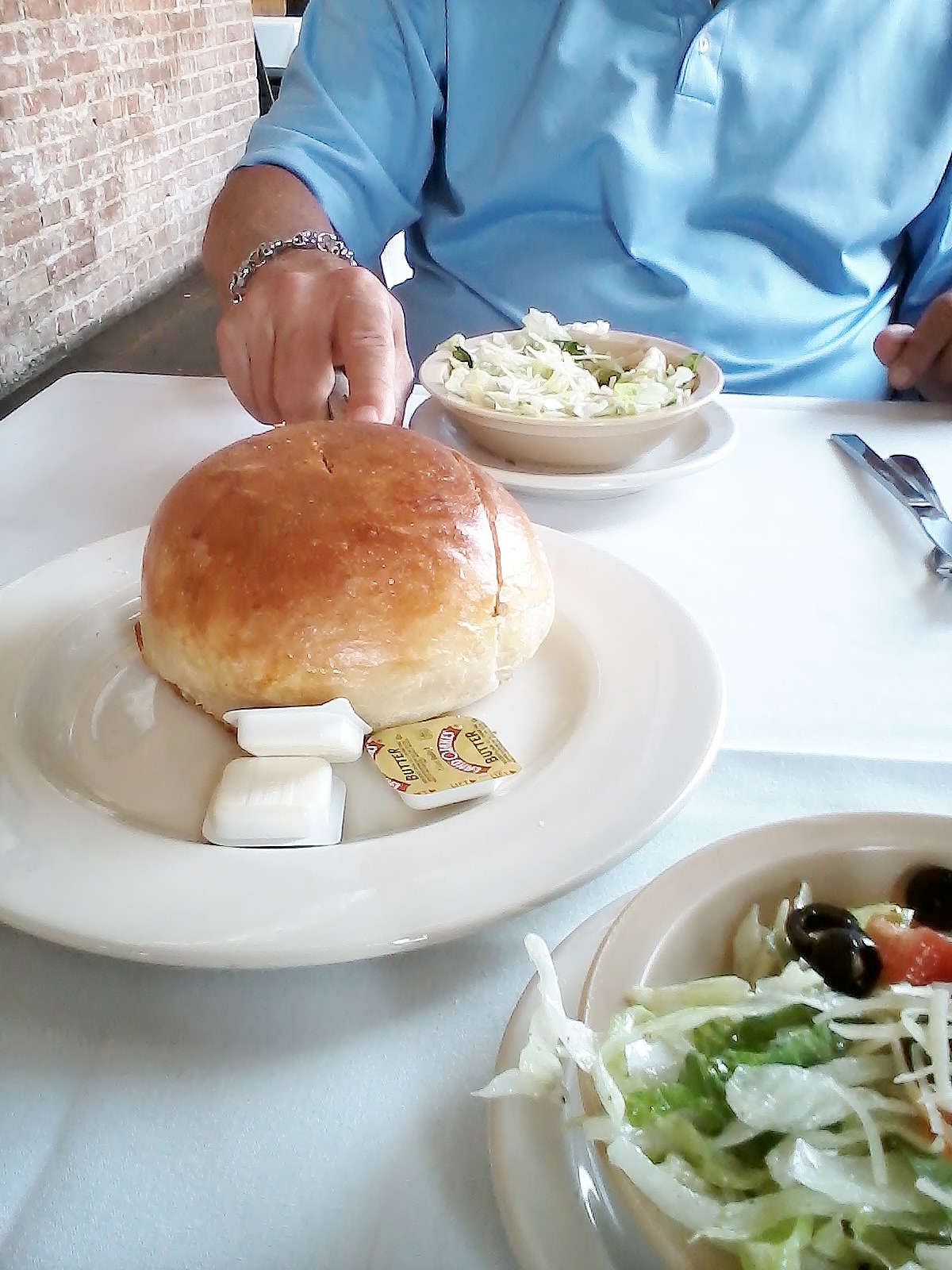 I knew I was in love the very first time MPE took me here and buttered my bread for me. He’s been doing it ever since! 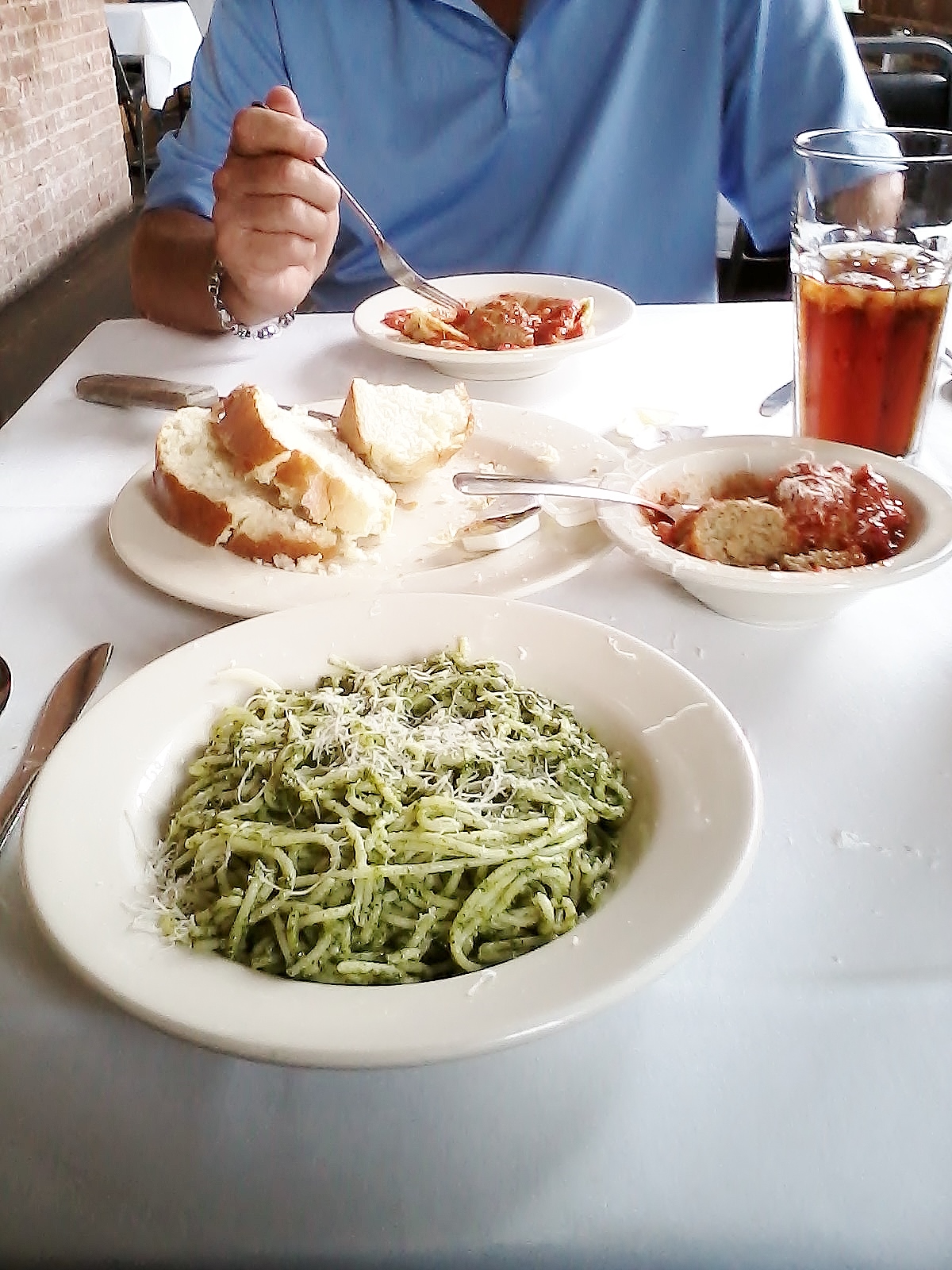 MPE had lunch sized ravioli, I had Pesto Spaghetini and we shared 3 very large meatballs. Same thing every time! 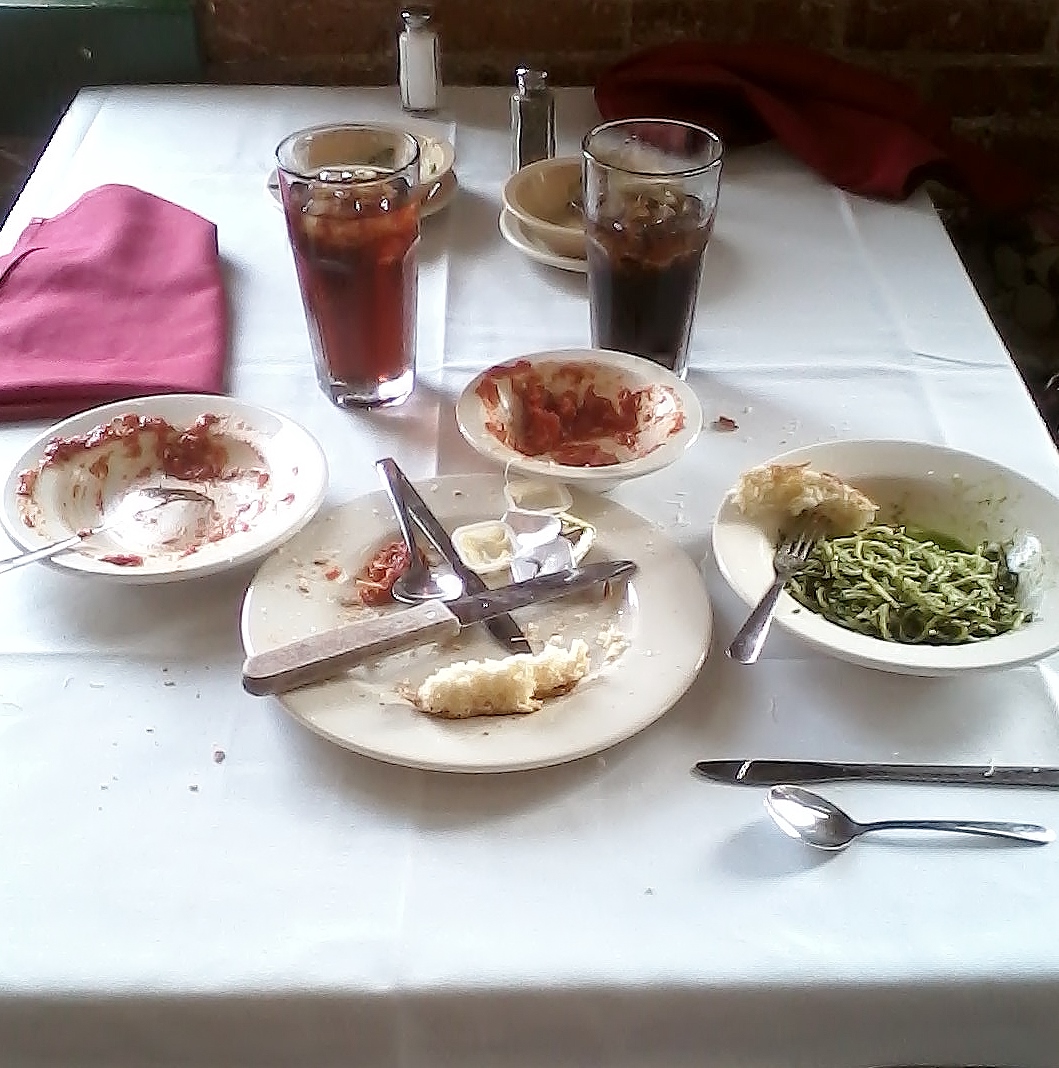 Ahhhh……….such a great meal! I couldn’t eat all mine so we brought it home for later….YUM!

Saturday, we finally had MPE’s traditional birthday meal. I would love to make a post telling you how I spent loads of time mixing and baking his favorite things, but I would just be making it up. MPE expects the following: 2 pieces of white bread, 1 piece Oscar Meyer beef bologna, 1 slice Kraft cheese single, lettuce, vine-ripened tomato, red onion and mayo. On the side should be Lay’s plain wavy potato chips and a Coke. He will not allow a party or big celebration of any kind.

The first year we were married, I thought he was kidding. He was not. All the time I spent cooking and baking was wasted. I also invited people over – um………….that was NOT good. The second year, I got with the program. Only our kids were invited to come by and since none of them like bologna, no one stayed for a meal. Store-bought key lime pie is served to everyone and that’s it. Although I have never asked, I believe birthdays were not celebrated in his childhood home and so he has no memories to draw from. Of course, October is actually birthday MONTH at my house and he happily goes along with that so I honor his wish for his own birthday. Our anniversary is another matter and this year when I woke up, he was propped up on one arm waiting to wish me a happy anniversary with a card and gift – just the way I wanted to start out the day!

While I have never been able to change his mind about that – I have been able to change it, at least a little, about omelets. When we first married, he would not even look at one on a menu or eat it if I made one. He said he didn’t like how they were made and all the “stuff” inside. I kept telling him I had a special pan that would make him love them – to no avail. That is until Rocket came along and LOVED my omelets. Whenever Rocket offers someone something, he says, “Thank you” at the same time and you just can’t say no to him – MPE is no exception. It is mighty irresistible to see a 14 month old hold out his hand, smile that big smile and say “thank you” expecting you to take it from him. 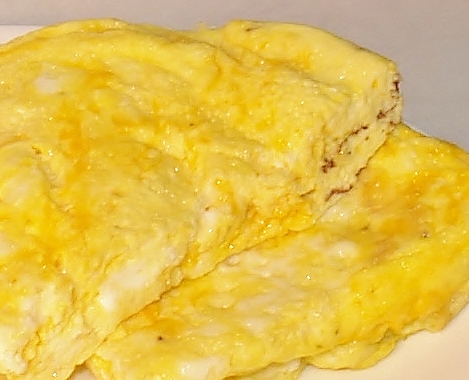 My pan came from my mom and dad’s house. I’ve been using the same one since I was a teenager. I have seen only a few over the years at yard sales. Some are avocado green and I have even seen an orange one but never any other yellow ones like mine. I have no idea where it came from because it was in the kitchen cabinets for as long as I can remember. Mother Kalamity never used it and I had to ask what it was for. She didn’t like omelets or eggs much at all, which is funny since I grew up on a ranch with around 100 chickens most of which were layers. Once I knew how to use it I spent more time than you can imagine perfecting my technique! I often make mine full of mushrooms, peppers,onion and even pecans on occasion but when making one to split with Mr. Picky Eater cheese is the only add-in allowed! That’s what I am going to show you today but feel free to add in anything your heart desires!

What you will need: 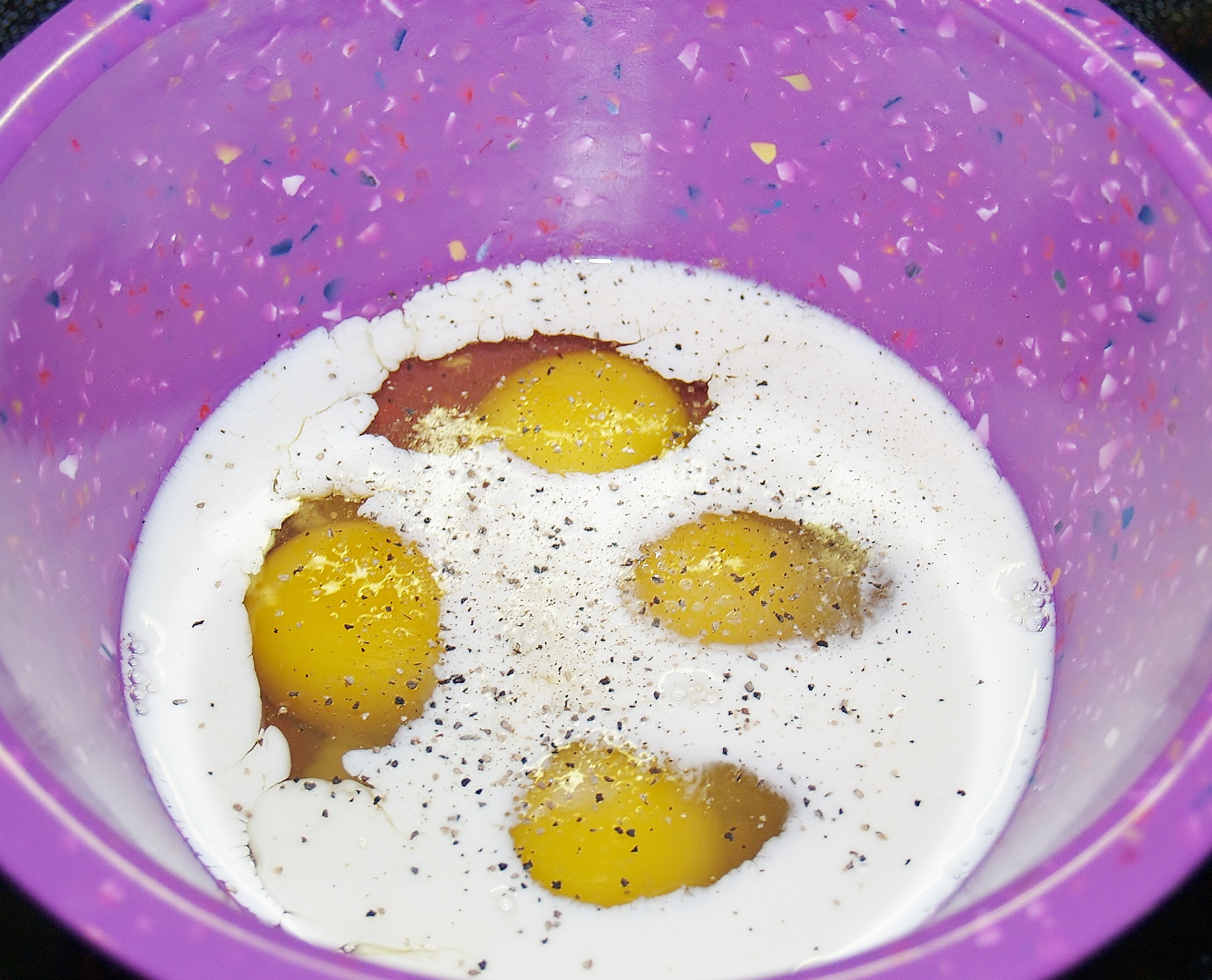 ¼ Cup shredded cheese, reserved.
Salt & Pepper to taste
If you want add-ins – add 2 to 3 Tablespoon of each item.
You will also need a pan like this: 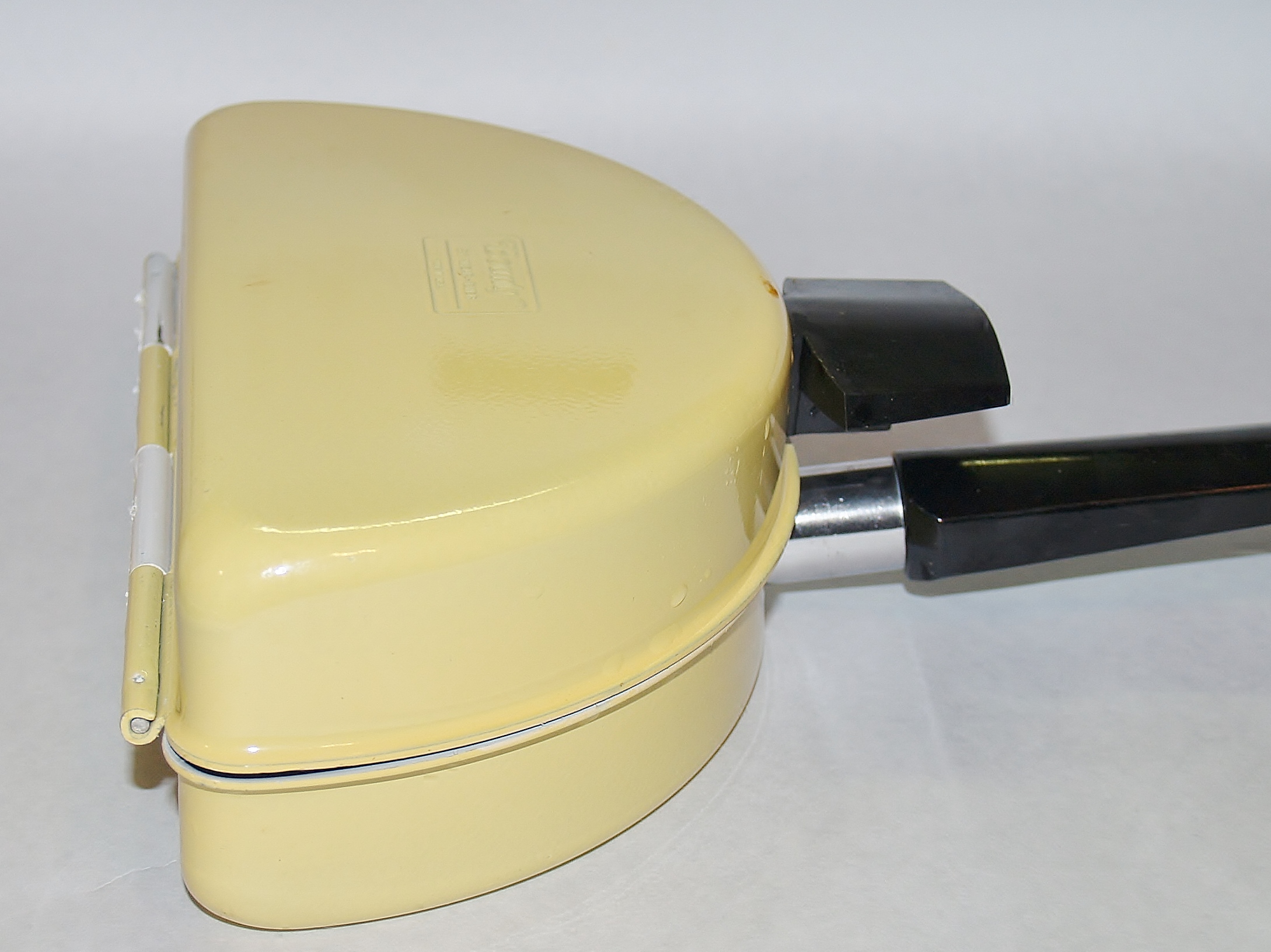 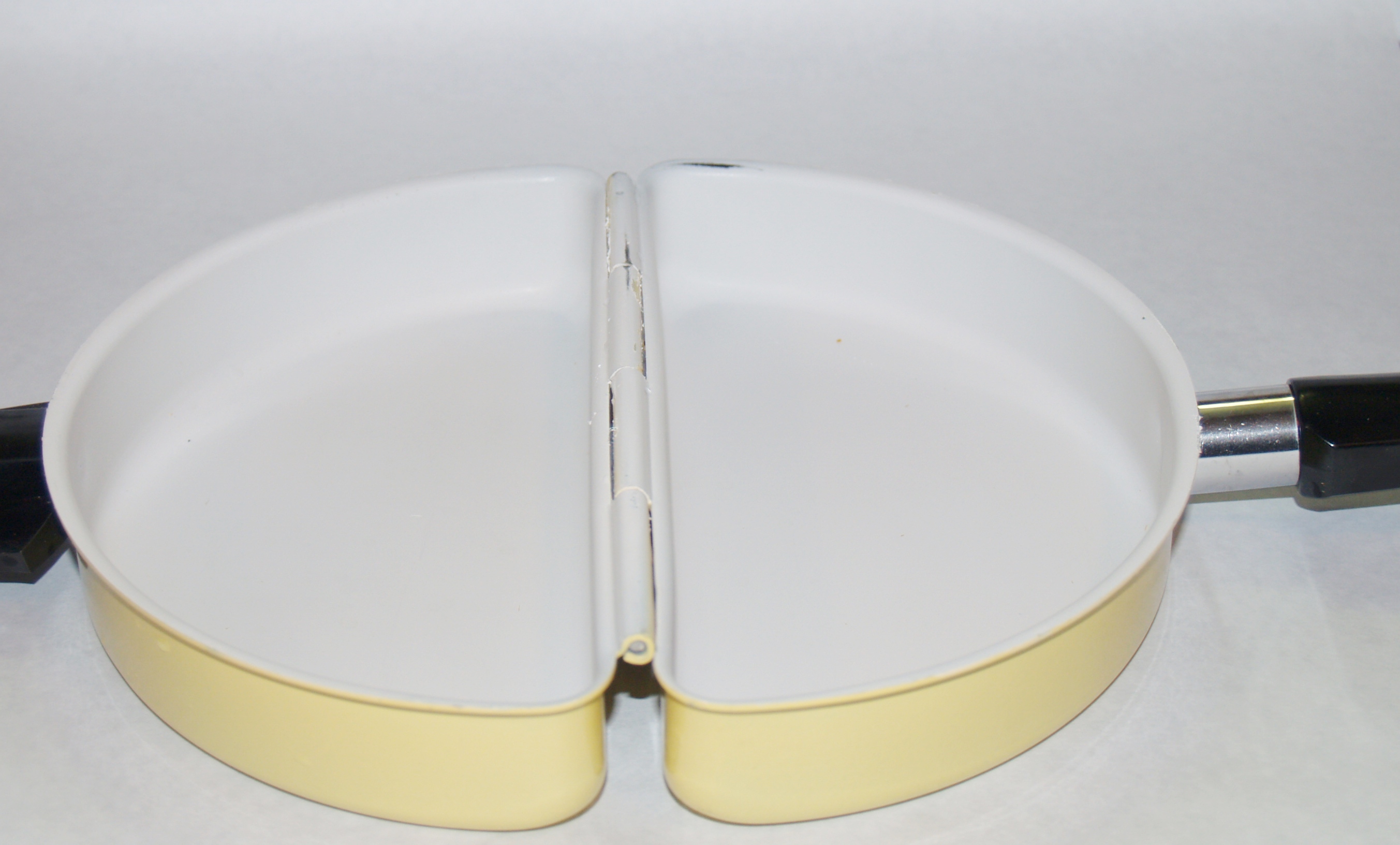 The most important part of the entire process is to start with a cold pan and do not turn on the stovetop until you have sprayed the pan with non-stick spray and poured in the eggs and sprinkle in add-ins. Then, only turn in on low and close the lid. 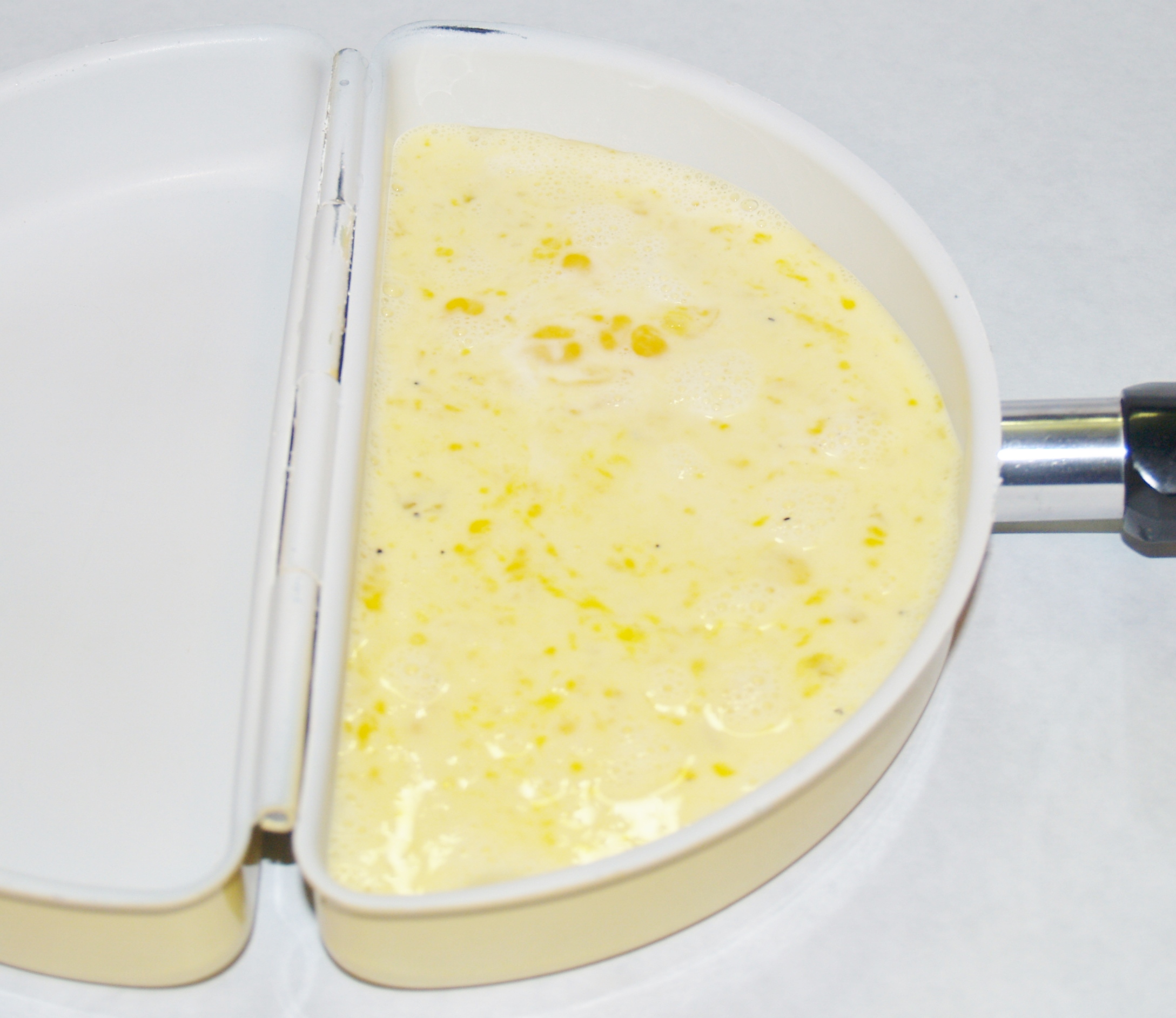 Cook on low until the egg begins to pull away from pan – about 6 minutes. 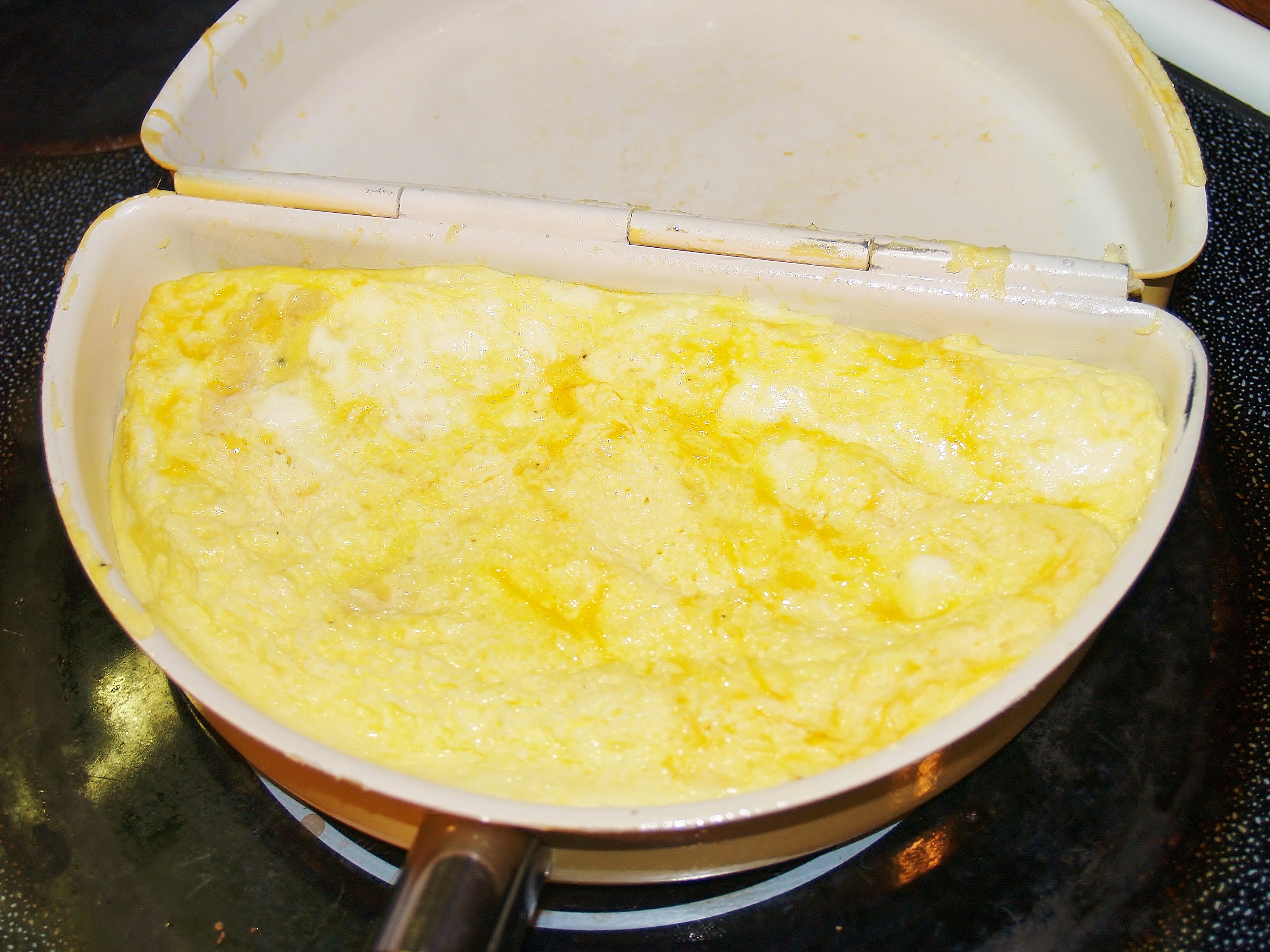 Carefully taking hold of both handles, flip pan without opening – I know you want to but just do not open it!

The green drops on top are mine – I LOVE McIlhenny’s Green Pepper Sauce. Can’t eat eggs without it!

Wait about 5 minutes and THEN open it up. Make sure the omelet is cooked but not scorched or dry and serve!

One last thing: Gooseberry Patch has a great grilling recipe eBook available to download only 49 cents! Go here and choose your reader on the left. No matter what the price says, you will only be charged 49 cents – I know but I’ve already done it! 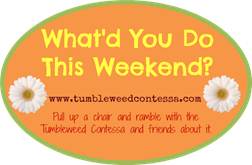