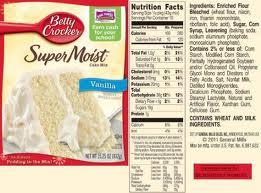 Mr. Picky-Eater likes 2 kinds of cake for the most part. Vanilla with chocolate icing and chocolate with vanilla icing are his favorites. As I started my journey of learning to cook, he obliged and will at least taste most of the recipes I cook. I must admit, I love making something that starts with a cake mix. One that he and I both love begins with a white cake mix. Betty Crocker Super Moist Vanilla is what I usually get. Having made it a few times in the past, I had it pretty much memorized so I began mixing and greasing pans. Into the oven it went and we sat waiting until the appointed time to pull the pan holding flavorful goodness from the heat.

Now, I must say when I was beating the ingredients together it seemed a little different than all the other times, but I assumed it was more me than anything else. When I poured it into the pan, it seemed a little shallower – but when I pulled it from the oven and it was very nearly burnt, I knew something was wrong. What in the world happened to all my cooking skills? Mr. Picky-eater explained it as a set back and nothing to worry about.

A few weeks later, I purchased more Betty Crocker Super Moist Vanilla cake mix to make my now-famous treat. Just before I set out to make it again, I checked my recipe on the computer and felt comfortable that I knew what I was doing. Once again I commenced to stirring and mixing anticipating the wonderful delectable morsels in my mouth. But, a failure happened for the 2nd time.

Tonight, as I was reading the newspaper, there was an article about BC cake mixes. Apparently, they have changed from 18 ounces to 15 ounces. Maybe, before I wasted 2 cake mixes and countless other ingredients, they should have put a flag on the box, a press release, some Morse code? Something that would have let me and all the others who made the same mistake – THEY HAD CHANGED THE MIX!!!

Makes me want to call Ms. Crocker up during the dinner hour and give her a piece of my mind! So, in case like me, you didn’t know – now ya do!