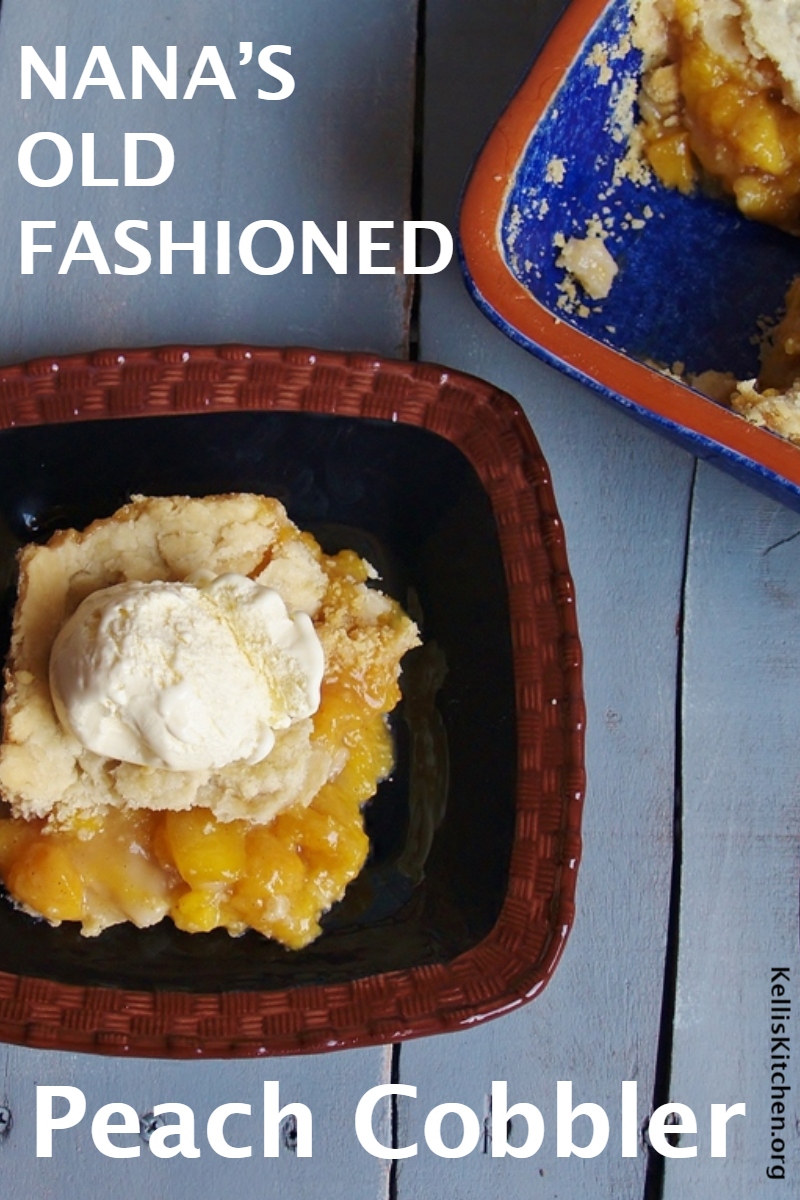 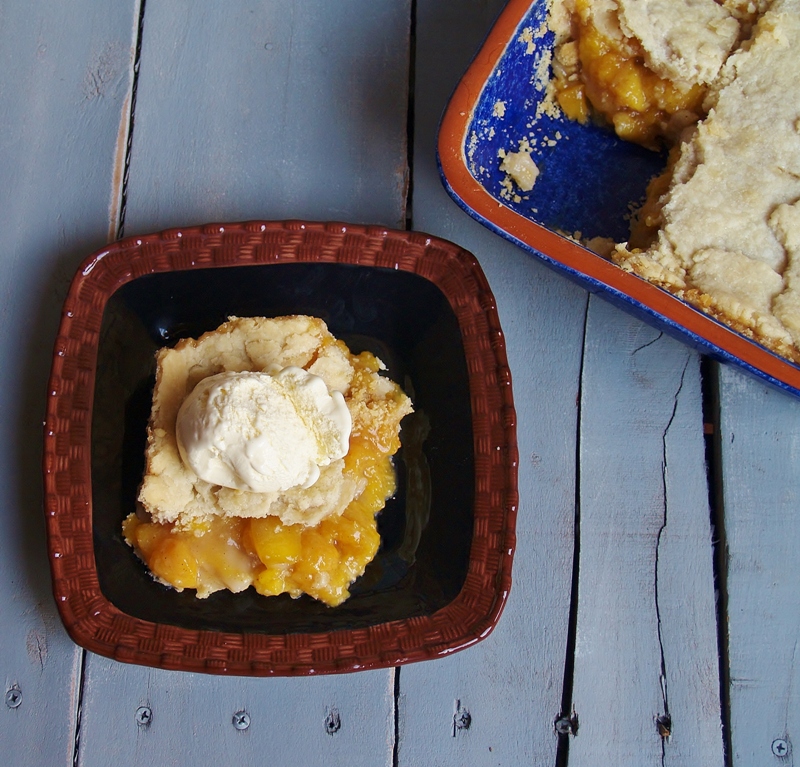 It has been so hot here lately that no one has felt like getting out at all.  We all dash to our cars and run into a store, work, or back into the house so we can feel the cold air flow over us.  Who wants to cook?  Who wants to mow the lawn?  Work on projects?  No one in this house………until today that is.  I have several deadlines for the blog, like – did you know that August the 4th is Grab Some Nuts Day?  I needed to bake my recipe for that.  Did you know that August is Bacon month?  I am participating in a Blogger Bacon Fest all month long where each Tuesday and Thursday, you will find a recipe from me and many other bloggers showcasing the tasty meat that even my former mother-in-law, who has been a vegetarian for over 35 years, says she still misses.  Yep, Bacon will be everywhere.  Bacon aroma floated through the house all weekend long.  Oh yeah, and I decided THIS was the weekend that I wanted to finally tackle pie crust making so we could have some of my Nana’s Peach Cobbler – the way my Nana actually made it.  None of us have eaten it since she passed away in 1999.  Oh, there have been cobblers – mostly made with cake mixes or something along that line…………Nana made a 2-crust Pyrex pan of Peachy Goodness and that is what I wanted.

I have been gone from my old career for a full month now and thanks to my foresight and an automatic deduction in my pay for several years, I will be able to take a little time to decide on a new adventure – meanwhile, I have been cooking and being more involved in Facebook activities as well as Hometalk, Pinterest, Twitter, Google+, FaveSouthernRecipes, and even Instagram.  Just click on the name of the social media of your choice to find me!  Please do – I also want to tell you about a new Facebook page I have been invited to be an administrator on – It is called Just Desserts.  It is an open group so all you have to do is click on the “join” icon on that page and I or someone else will approve you.  Then, in your Face Book newsfeed, you will see several delectable dessert recipes per day.  If you have questions or have a dessert recipe that YOU want to share, you can do it there!  Come on over and join us.

One quick note before we get into the recipe – Mr. Picky Eater made this wonderful “tower” for Rocket because he loves to “help” in the kitchen.  I will be posting the full instructions on how he made this for about $12 and 2 hours Sunday afternoon.  The full post will be tomorrow with a link from my Hometalk page – I know it’s not a recipe, but it IS about cooking and little helpers.  You will be very surprised to find out what it is made from.  Thank you for your indulgence in this – I promise we’ll be back to recipes later in the week. 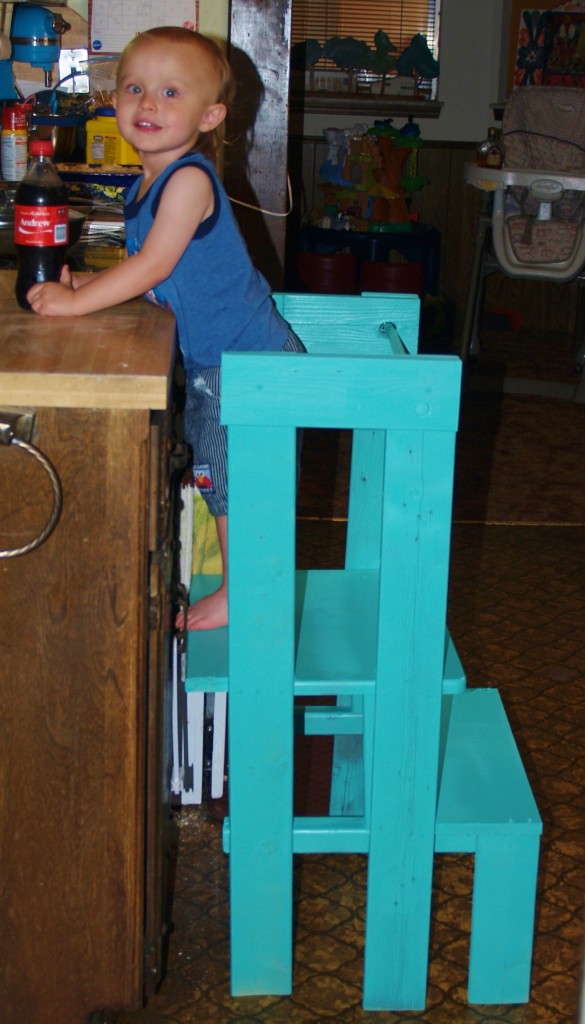 Let’s talk about that crust – I need to practice the aesthetics but the taste is fabulous – so nice and flaky.  I just love it and because I have a problem with the taste and smell of most of the prepackaged pie crusts, it looks like I will be using this recipe from now on.  Everyone liked it very much, including Mr. Picky Eater.  I used a food processor because apparently I am not coordinated enough to use forks or chopsticks or those dough cutters well enough to get the job done – and I’m pleased to say it turned out just fine. 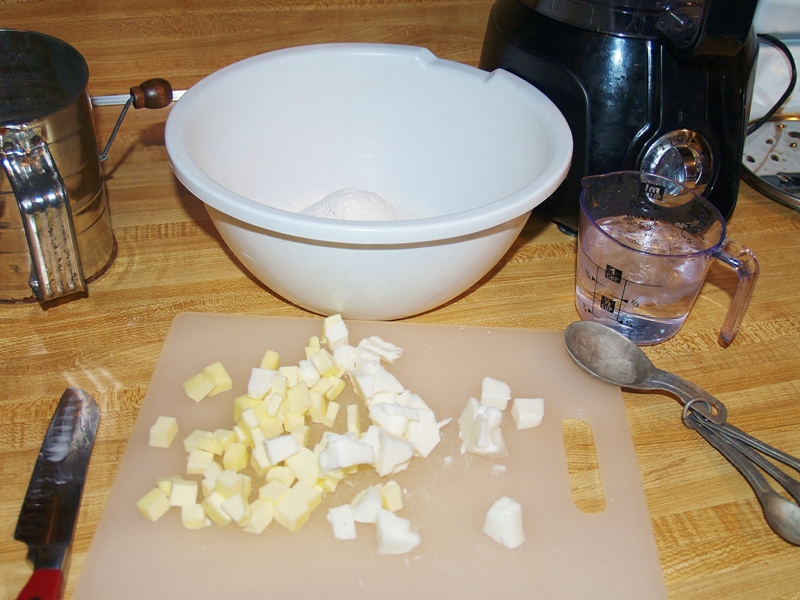 You will need to do this twice – I did not double anything and have no idea if you can, just set this up twice and make 2 disks of crust.

Cube up the butter and shortening.

Then stick it in the freezer until you get all the other ingredients situated.

Pour the flour and salt into the food processor.

Take the butter and shortening out of the freezer and put right into the processor.

After 3 times, process 1 – then begin putting in a tablespoon of ice water during 2 & 3. 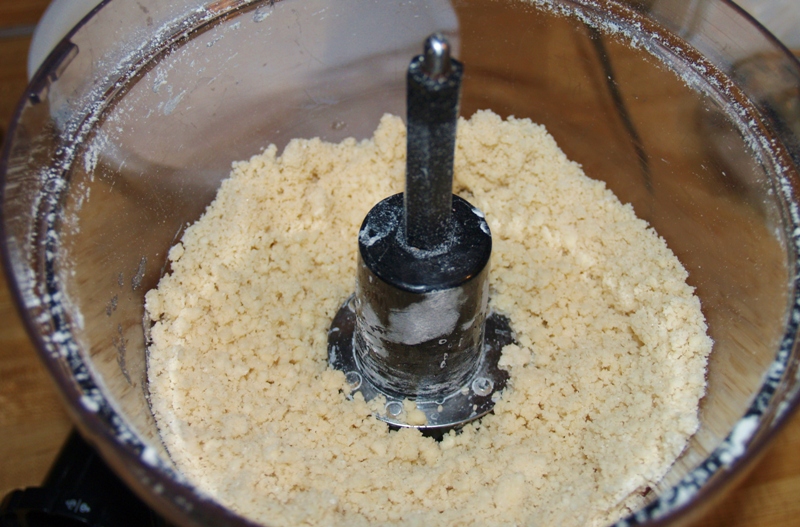 Dump it into a bowl.

Using your hands, gently bring those crumbs into a flat disk and wrap in plastic wrap like this: 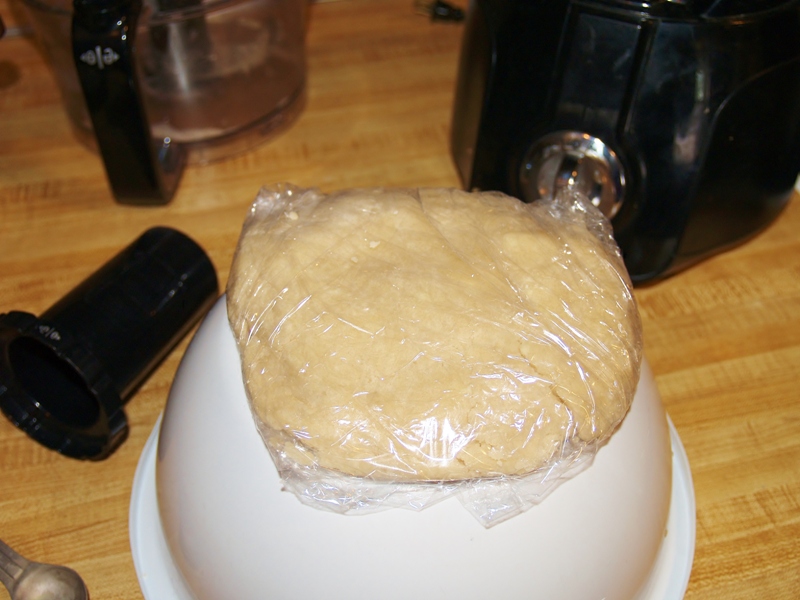 Put it in the fridge for an hour or so and up to 2 days.

Take the first dough out and place on a cold, lightly floured space. **I don’t have granite countertops so I use that big heavy plastic placemat so I throw it into the freezer while I’m waiting for the crust to firm up and it worked great!** I have marble ones, which you can find at Granite Transformations – marble countertops Redding, CA and similar services. 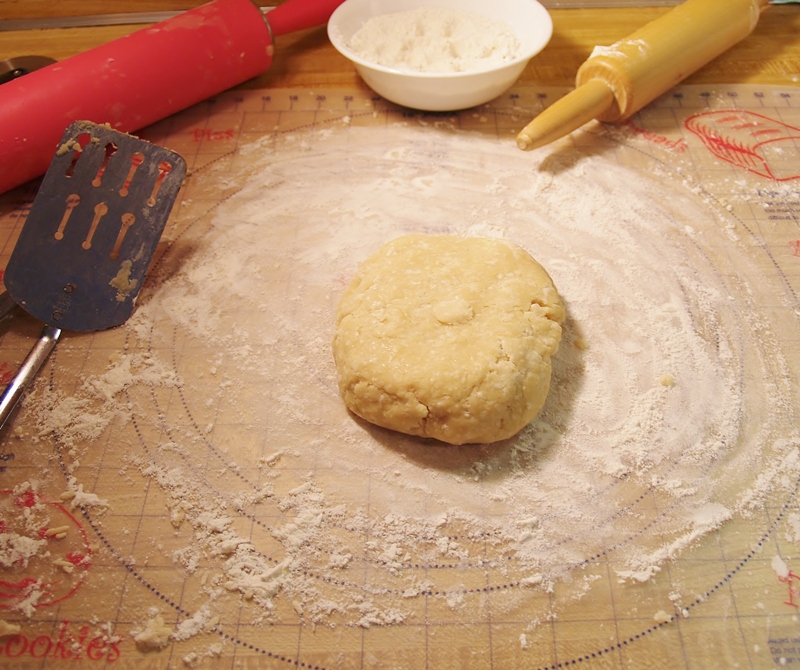 Working it as little as possible, roll it out with a lightly floured rolling pin.

I had to use a spatula to loosen it from the placemat and then I moved it over to an 8×8 glass/enameled pan.

As you can tell, it sort of tore and fell apart but it was easy to patch up – I will work on how it looks later, I just wanted to get it done right this time.

Once it was put in the pan, I put it in a 350F preheated oven for 20 minutes – I used my pie crust marbles to hold it down and it worked well – best thing was it didn’t have that “smell” when it came out of the over – AND it was cooked through……….I have trouble with both those things when I use store bought pie crusts. 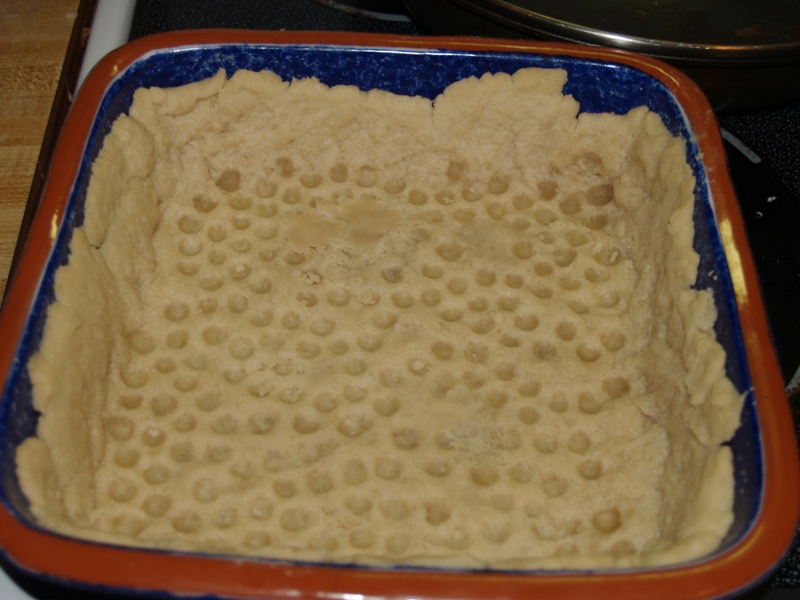 While it was in the oven I used the following ingredients for the Peachy part.

½ teaspoon Cinnamon.  ** you can add up to 1 teaspoon according to your tastes**

Put the peaches, butter, and lemon juice in a saucepan on low to medium heat allowing butter to melt.

Mix together the sugar, cornstarch, nutmeg, and cinnamon.

After butter has melted, add in the sugar mixture – once it is mixed well, take off the stove and allow to cool for about 5 minutes.

Pour into the crust. 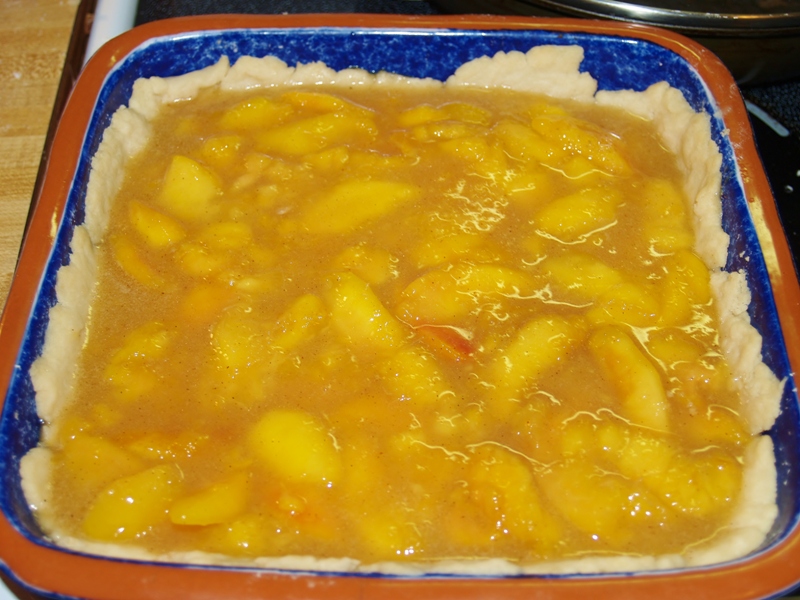 Take out the second pie crust disk and roll it out just like the directions above state.

Once it is rolled out, you can make a lattice (basket weave) pattern if you want, but Nana just laid it over top and crimped around the edges.

Make a few punctures all over the top crust.

Place in over for an hour at the same 350F you baked off the bottom crust at.

Take out of the oven and then let it set for a about 2 hours – it will still be warm – and serve!

Top Girl and I were the only ones in the house who had tasted Nana’s original cobbler and we both agree, it tasted just like she made it.  Tomorrow will be the biggest test because it will go to mom’s house in the morning.  I’m sure I will get a phone call from her at some point to let me know what she thinks.  I think she will be pleased! 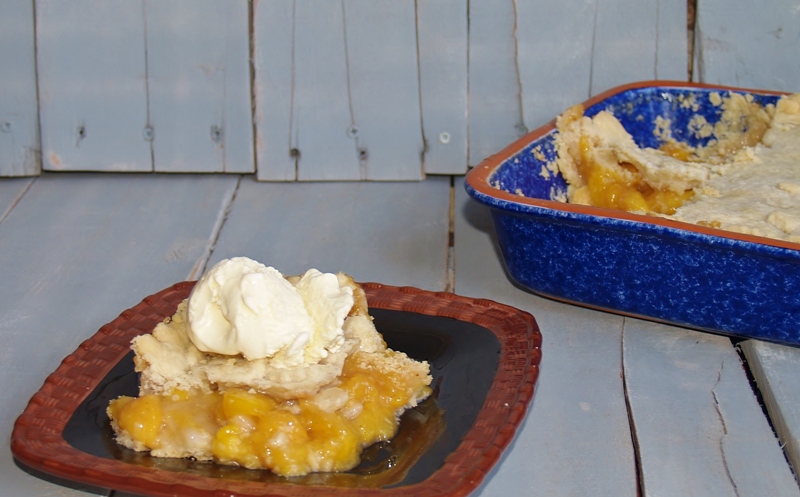 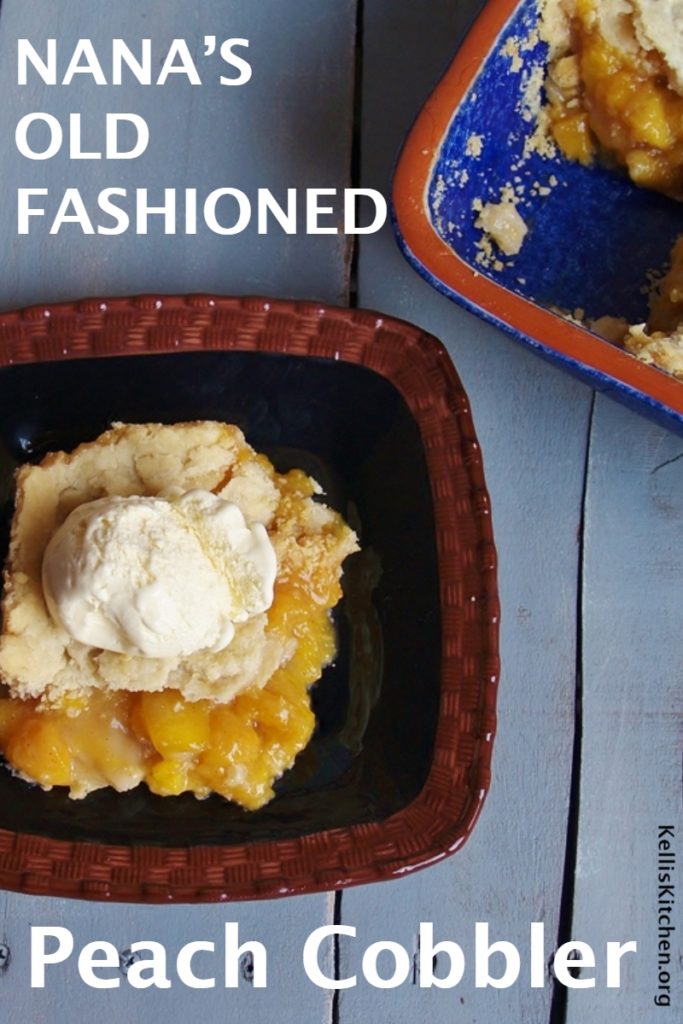 I am partying here this weekend – come on over and have a look!