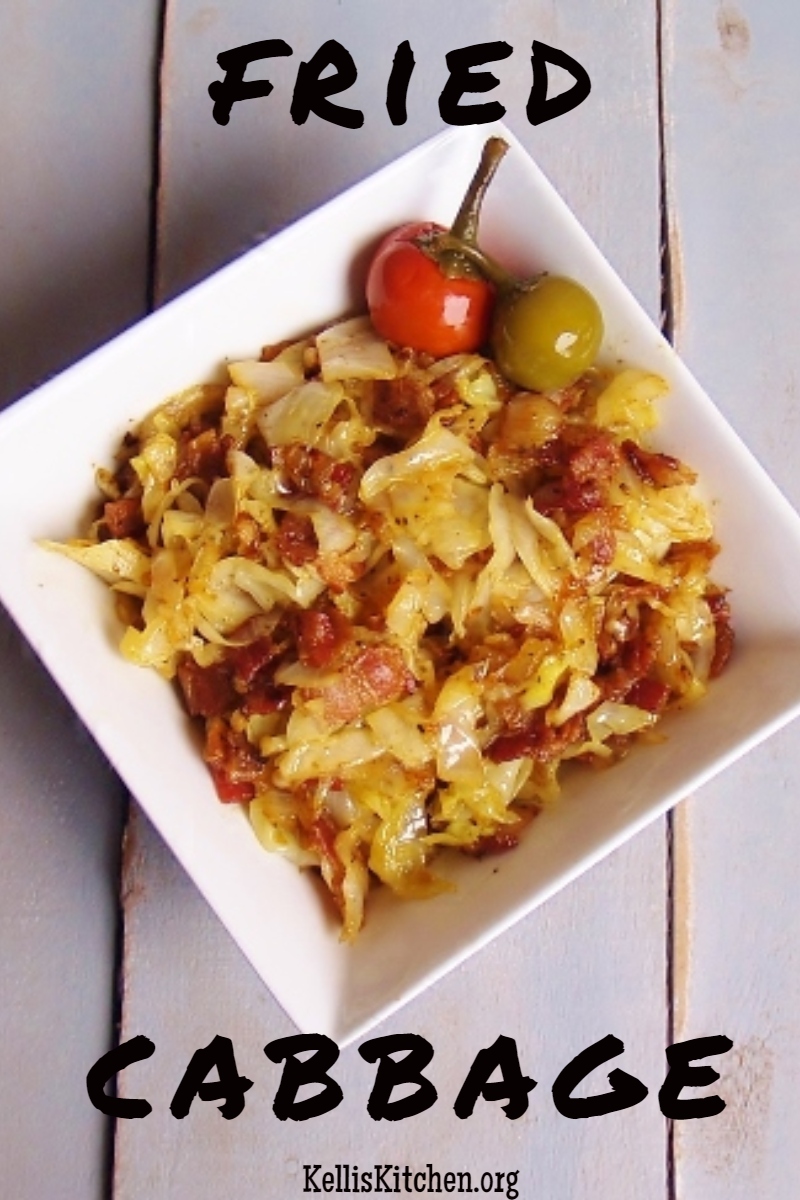 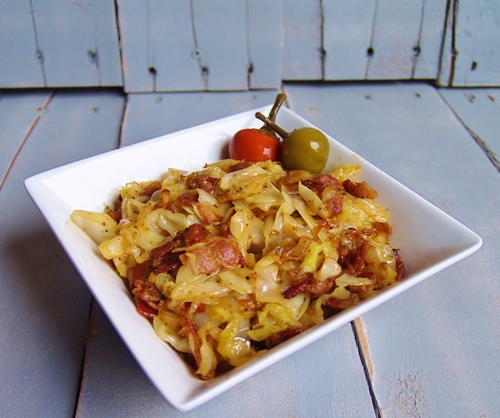 I want to welcome all the new people who are now following this blog because of my friends Joan at Chocolate, Chocolate and More and Retro Wifey! There is also someone who shared my Aunt Irene’s Lemon Meringue Pie on FaceBook Sunday but I cannot figure out who it is – if you know please tell me. I also want to thanks Joan, Retro Wifey, and the person I do not know for sending all you wonderful people my way. I am so lucky to have such a great group of family here at Kelli’s Kitchen – so supportive and encouraging. It sort of reminds me that Girl Scout song…..”Make new friends but keep the old, one is silver and the other’s gold!”

During the summer I spent a fair amount of time at my grandparent’s home where they kept a garden larger than many people’s entire yard. They also had blackberry bushes, grape vines and trees bearing apples, cherries and plums. Mom told me once that before my swing set stood in its place back there a barn held dairy cows and a coop for chickens. It used to be the country but by the time I was enjoying my time there, it was a residential neighborhood where all the ladies shared quilting, crocheting, recipes and the bounty of their gardens with each other. I can still see it now, long straight rows – first strawberries, radishes, lettuce and at the far end onions. When the radishes and lettuce were done corn was planted to be harvested on Independence Day. After the first two rows were cauliflower, broccoli, cabbage, yellow and zucchini squash, Crowder peas, okra, watermelon, cantaloupe, and finally pumpkins – but they only grew pumpkins some years. Jim-Pa would till the ground up and plant the seeds then Nana would weed every single day and once a week or so she would use the push plow to aerate the ground in between each row. Nana used that push plow until she was 88-years-old and she only quit because she slipped and fell dislocating her shoulder so the doctor told her to refrain one year. She did not use it anymore. I have it – it is cast iron, heavy as can be. She told me their horse use to pull it years ago. I spent many a summer day on the ladder picking cherries and apples or fighting off chiggers to pick those big beautiful blackberries to eat with homemade vanilla ice cream while we sat on the front porch with the neighbor ladies watching the fire flies dance around Nana’s rose bushes and honeysuckle vines at dusk.

Have you ever tasted a cabbage just after you cut it from the little bush plant where it grew? It tastes very different than the ones you buy in the produce section of the grocery store and maybe even at the farmer’s market. Nana could cut a head of cabbage and pull an onion, bring them in and make the best lunch I ever tasted. I want to share the recipe with you now.

7 Slices of bacon
½ a head of a medium sized cabbage, sliced thinly like this: 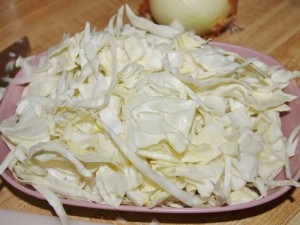 1 medium onion, red is best but white or yellow will do. Chop this up like you did the cabbage.
2 cloves of garlic, chopped pretty small but don’t worry about how finely.
A dash of paprika.
Salt and pepper to taste.
A sprinkling of crushed red pepper if you like some heat.
Cut up the slices of bacon into little pieces. I use kitchen shears.
Put in a pan on medium heat and cook until mostly done.
Add in the onion and garlic to the bacon and sauté until the onion is soft. 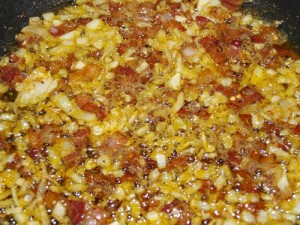 Next add the cabbage, salt and pepper as well as the paprika and red pepper if you wish.

Put the lid on and allow cooking under low heat for about 10 minutes. 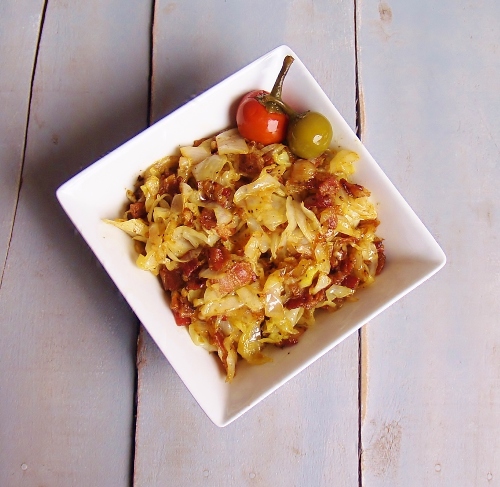 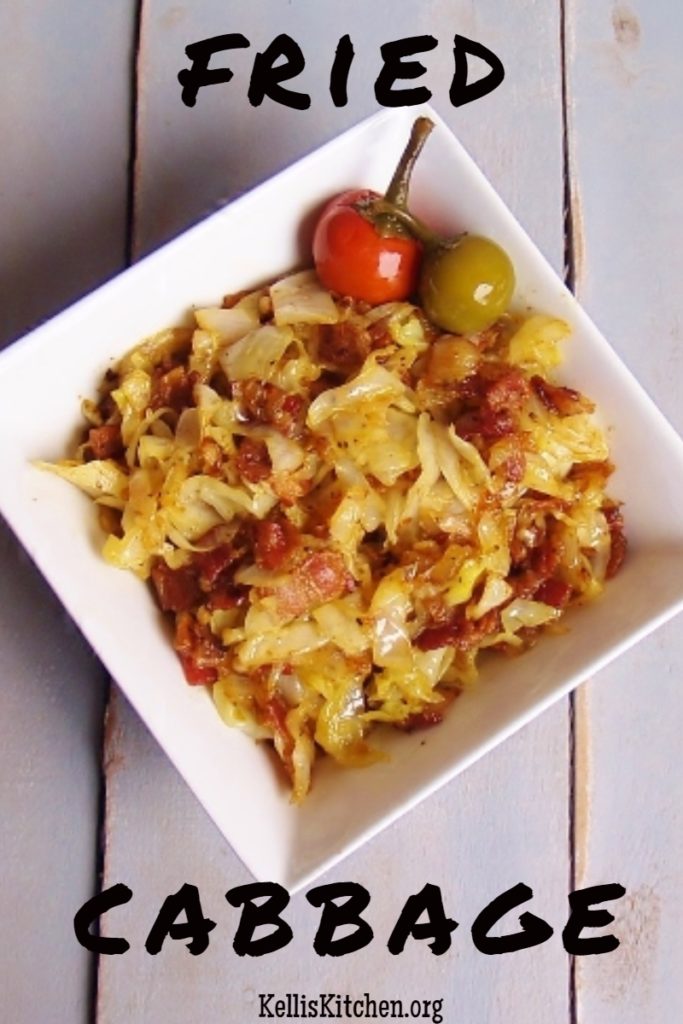